Almost four years ago I blogged about a demo I built using Reddit's API. The demo was a multi-user application that made use of Mongo for persistence and Passport.js for user authentication. You would login, select subreddit's to subscribe to, and then once a day it would email you the new posts from that subreddit. This was built in a "traditional" Node.js style with a server running full time to process requests. I thought it would be fun to build this again (although slightly different) using Pipedream's support for working with the Reddit API. I built two different versions of a simple workflow I'd like to share below.

So before I begin, how does Pipedream support Reddit? Currently Pipedream doesn't have a "service explorer" or a way to see what pre-built actions are available. What I've been doing is going to a test workflow I use for, well, testing, and click to add a new action. I then browse what's available. If you know what you want, you can click the name of the app to filter. Apps will be at the end of the list of actions: 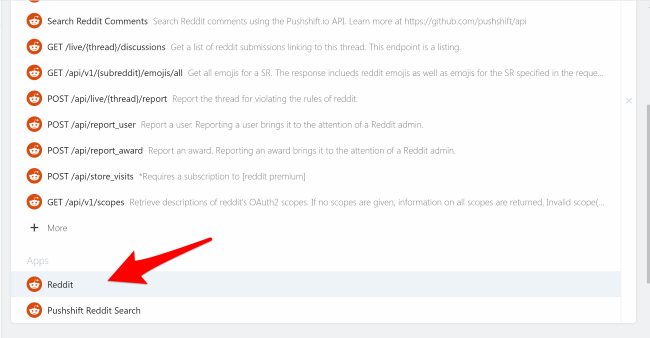 After you click it, the actions are then filtered to items within it. In the case of Reddit, this is quite a bit:

You can type to filter even more. For my case I knew I wanted to get new posts so typing "new" was enough:

Finally, once you select the action, note that the you probably still need to know about the API itself. Sometimes the properties are obvious, but sometimes they aren't. So in the example above, I knew what Subreddit meant but wasn't sure about the value of "after":

So in that case, I simply used the Reddit API documentation.

Alright, so with that out of the way, let me talk about what I built.

For my first workflow, I attempted to recreate my Node POC in a simpler manner. When you add an application to your Pipedream workflow and authenticate it, it's tied to your account, so instead of trying to build something multi-user with Mongo and all that, I settled on a simpler idea.

My workflow ended up with the following steps:

Be sure to make note of that epic ternary operator in there. I'm a 10X developer, 9X minimum.

And that was it. Now I've got a daily report for my favorite subreddit (it's for my local area) that shows up in my inbox once a day. 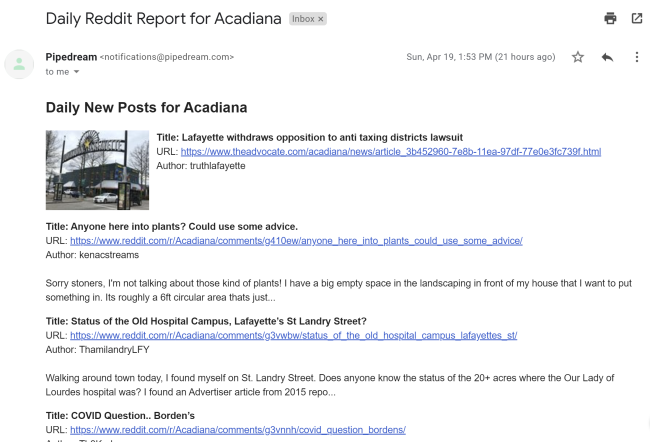 You can view (and copy!) the complete workflow here: https://pipedream.com/@raymondcamden/daily-reddit-posts-p_dDCYOd/edit

The first iteration was nice, but a bit limited. For the second version I decided to kick it up a notch. I wanted a version where the email contained new posts from ally of my subscribed subreddits. Luckily Pipedream makes that part trivial as they have an action for that already. All I needed to do was put it together. But that raised a new issue. I knew I could take my first workflow and turn it into an API. Pass in a subreddit name and return the posts as JSON instead of emailing them.

But Pipedream doesn't support the idea of "loop over this array and execute a step for each" - at least not yet. Given that I knew I'd have a workflow as an API, I decided to use two workflows. One for the API, and one to handle making HTTP requests to that endpoint and "collect" the results.

Let's start with the API. I began with a HTTP trigger which gave me a URL to hit. I then added the same "get new" Reddit action and tied the subreddit name to the query string:

Note that after I had tested my URL with a query string value (subreddit), the editor was smart enough to suggest it when I added the step. It even (although it's not in this screen shot) showed a sample value. This was freaking cool and super helpful.

My next step was the "filter and return" step and used this code:

And that's it. Now if I hit myurl?subreddit=Acadiana I get a JSON dump of new posts for that subreddit. I'd share a dump but it's rather large. You can view/copy this workflow here: https://pipedream.com/@raymondcamden/daily-reddit-api-p_WxCkrw/edit

So that's the API. To build my "real" workflow, the one handling gathering and emailing data, I built a new CRON-based workflow. For my second step, I used the "get my subscribed subreddits" action. I only needed to supply "subscriber" as an argument:

The next step is a Node one. This handles taking the results from the previous step and making the asynchronous calls to my API:

Note I also sort the posts by date. I think some people may prefer their "report" grouped by subreddit. I kind of liked the posts mixed up. The next step handled creating the email. I'm going to skip sharing the code because you can see it when I share the workflow and the only real change was to include the name of the subreddit. The final step was just the email action. And that's that.

From my initial workflow to this one, it took me maybe one hour total. I loved that I had that flexibility and could basically just drop in steps like LEGO pieces. Here's a screen shot of the email: 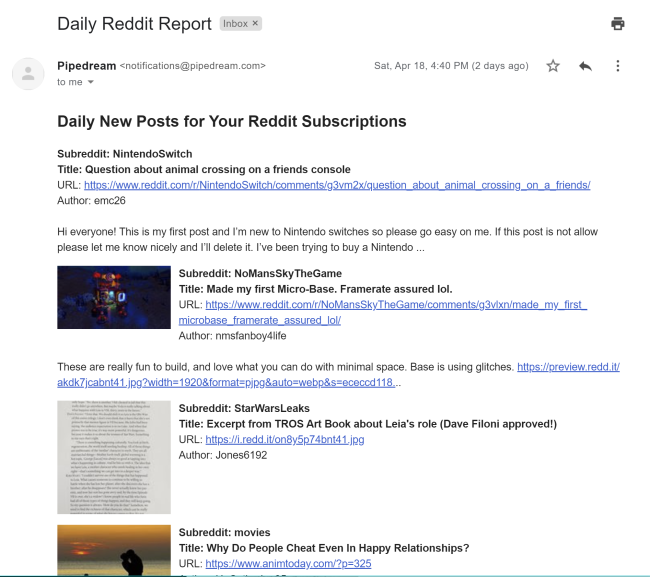 I hope these examples were helpful, and keep in mind I'm still a new Pipedream user so (most likely) there's nicer ways of doing what I demonstrated. Leave me a comment below if you've got any questions!