For the past few weeks (mainly due to travel) I've been working on a little POC (proof of concept) for an application that most people will probably think doesn't make sense. I'm still somewhat of a new Reddit user. I'm not really an active participant either. I've got some subreddits I check almost daily, some a bit less, and I'll maybe do 3-4 posts per month. Maybe. I found myself doing the same thing whenever I wanted to check the site.

I'll load a subreddit. Click on new. And then scan for interesting titles. Then I go to the next subreddit I care about. Of the 20 or so I've subscribed too, I'll probably 3-4 every day. I found this process to be... annoying.

First - I don't like the fact that I can't get Reddit to default to "new" versus "hot". Frankly, I don't necessarily care what's hot - I care about what's new.

Second - I know that the home page would let me view new items all at once, but it also mixes up all my subreddits in one big mess, and I don't like that either.

And yes - I know I'm being a bit picky here, but it occurred to me - hey - if Reddit has an API, couldn't I build something that does what I want it to? 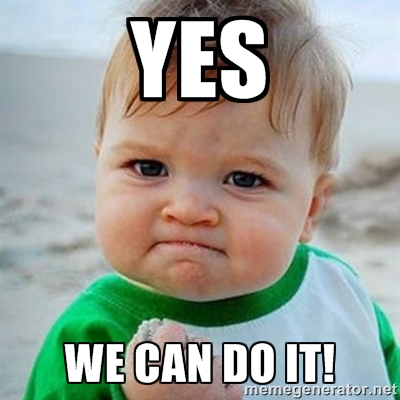 So for my POC, I decided on the following features:

So with that out of the way, let me talk about how I did it. All of this code is in my GitHub repo: https://github.com/cfjedimaster/dailyreddit

Since it's the simplest aspect of the app, I'll cover it first. I decided to go with MongoDB for persistence and Mongoose to wrap the calls. I built a User model that consists of an ID, email, and array of subscriptions.

And that's pretty much. In a bit you'll see where I store the user and how I fetch it, but in general, I'm not doing anything at all fancy with my persistence.

I've already mentioned that login was done via Passport and in general, it was pretty easy to do. I decided on supporting Facebook and Twitter so I had to create applications for both and then configure my Node code to make use of them. Facebook was slightly more difficult in that I had to specifically ask to get the email field, but it took about sixty more seconds to figure that part out. Here's the code block related to Passport.

I don't know if it "just happened" or if Passport goes out of it's way to make it easier, but the profile returned by both Twitter and Facebook followed the same form allowing me to easily handle the login part. Notice that I create a unique ID based on both the ID from the remote social network and the name of the social network as well. Because - who knows - maybe a person could have the same Twitter primary key as your Facebook ID.

To work with the Reddit API, I used the snoowrap library. It was a bit awkward to use at times - just because I had a bit of trouble understanding the docs at times, but when I reached out to the author they responded really darn quickly which was great support. I'm only doing two things with the Reddit API (search subreddits and get the latest posts for a subreddit) so my helper module is pretty small.

For email, I decided on MailGun as it had a free tier that was incredibly generous. I had a lot of trouble actually trying to use it via Node though. Nodemailer seemed really nice, but I couldn't get it to authenticate with MailGun. I ended up using a package called mailgun-js and it "just worked". Here is an example of it in action.

MailGun supports both HTML and plain text emails, but I decided on just using HTML email for now. Speaking of...

For the email itself, I had some basic requirements:

So with those basic rules in place, I began building a template to handle my report. Since it's HTML email and HTML email is pretty much the HTML you had in 1992, I used a bunch of inline styles and super simple layout:

And here is it renders. It isn't great, but it gives you an idea of what I'm going for: 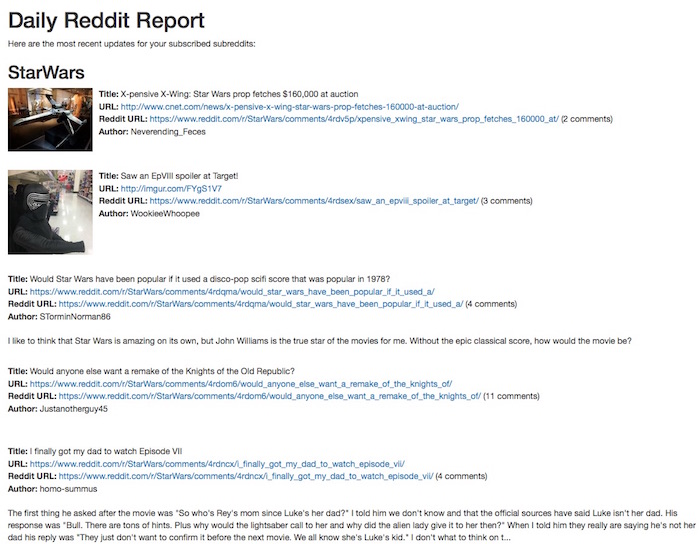 The code to handle subscriptions is a bit large, but not terribly so. Here it is:

As you can see, I do a bit of massaging on the data returned by the Reddit API and a bit of filtering to ensure that new stuff is really new from the past twenty four hours. Outside of that - I just render the email and send it off.

Yeah, so the front end is so minimal I actually forgot to write it up when I first published this blog entry a few minutes ago. I went with Bootstrap for a quick and dirty clean UI. The login is just two buttons:

One thing I didn't built but would definitely include if I was going live with this would be to include a cookie (or LocalStorage item) that remembers which social network you used the last time you logged in to a site. I don't know any site doing that and I wish they would start. I try to use Google auth as much as possible but I'm not terribly consistent with it.

Once you login, I simply show you your current subscriptions and provide a form to search for more. It isn't obvious, but if you mouseover your subscriptions I use a tooltip to tell you that you can click to remove.

And here is an example of the search in action - clicking a subreddit will add it to your subscriptions: 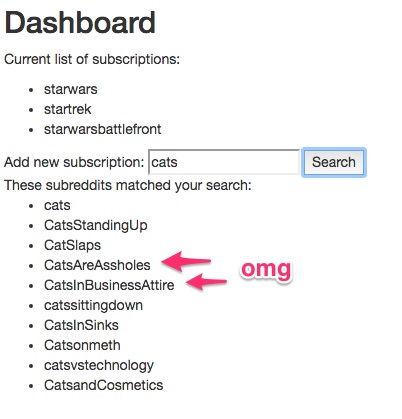 And that's it. No logout or anything else. I think it would be nice to maybe provide a 'Show me the current new right now' type link.

So yeah - where exactly is this? Am I actually using it? I can host it for free up on IBM Bluemix, but while we support MongoDB persistence, I don't have a free account with our service provider. So to actually move it to production I'd need to host someplace and pay money for it, or change to Cloudant or some other system. As my persistence stuff is incredibly simple, this should be easy enough to do, but frankly, I'm happy I built it, I learned some stuff, and I'm fine with it staying on my local machine as a POC.