A few weeks back I posted (Monitoring OpenWhisk Activity) about how you can monitor your OpenWhisk activity. One of the things I made note of is that it would be nice to have an "alert" system such that I could specify that if a certain action began performing poorly, I could get an alert. Now "poor" is a fairly nebulous term, but today I worked on a little demo that I'd like to share. It uses OpenWhisk itself to monitor your OpenWhisk actions, but in general, I'm more concerned about my code failing, or third party APIs failing, then OpenWhisk itself.

I began by creating a basic action that would return true if the action was acting up. Let me share the code and then I'll explain how it wors.

Alrighty - so the action expects the following arguments:

I use the OpenWhisk npm package. Note that I do not have to specify the authentication information since I'm instantiating it in the main function itself. This means it will pick up the authentication values for the account. I then fetch activations using the filters as described above. Note that there is a undocumented limit of 200 activations. You could get more (I document this here) but since you have control over how often this check runs, you can specify a schedule that will ensure you don't run into that problem.

Once I have my activations, I loop over, count up the good ones, and then use a bit of math to get the percentage. If you are too low, then we are in error. I called this action, isBad, and I know it's kinda bad to use a negative like this. In this case, the true status of this action implies we've got a problem and that kinda makes sense to me, but I could also see building this as isGood and reversing the results. The "Clean Code" part of me felt bad about this but the "Get er Done" part of me told it to shut the front door.

Note that I return a status and the action requested. I could have also returned the total and total good values as well.

So in theory... that's mainly it. A person using this would combine this with another action to handle the result and do something. So for my first example, I combined it with a simple email action:

In this action, I just use SendGrid to fire off an email. The template is incredibly simple. And here it is when executed (I fixed the typo with its/it's later):

And then for the hell of it, I wrote up a Twilio action so I could send a SMS: 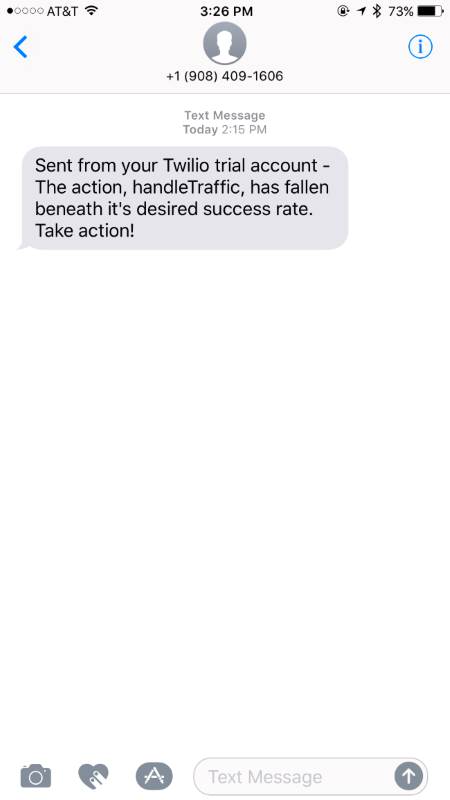 And that's basically it. To make this "live" I'd set up a CRON trigger and figure out how I want to be notified, but since my code is perfect, I don't have to worry about this. Woot! You can find the source for all three of these actions here: https://github.com/cfjedimaster/Serverless-Examples/tree/master/alert