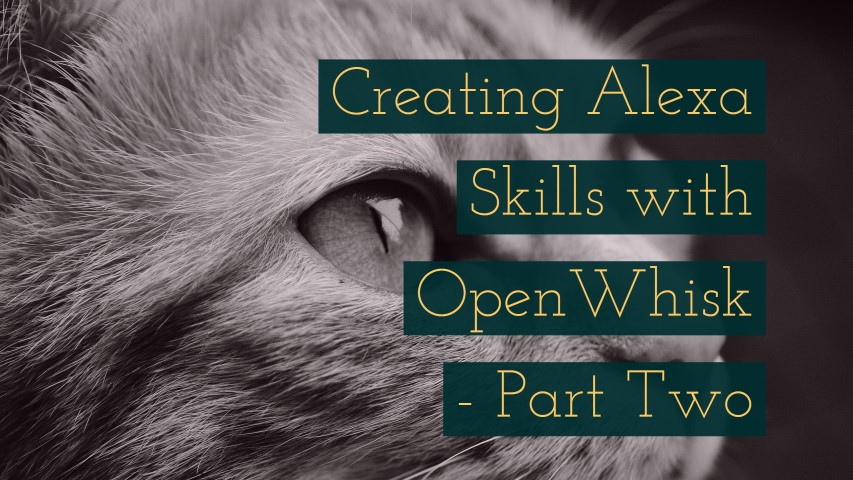 This is my followup to last week's post on building Alexa skills with OpenWhisk. What I'm describing today represents some very recent changes and I would warn people that this post may change in the future. The focus of this post involves what you need to do to get your Alexa skill verified. I'm still in the process of doing that myself, but my holdup now isn't related to technical issues so I feel safe in sharing this update. Again though - take with a grain of salt and I'll try to ensure I clearly mark any updates post release.

Whew. Sorry about all that - I just like to make sure people know this is still a bit of a moving target. ;)

In my first post on building an Alexa skill, I talked a bit about the verification process your skill has to adhere to in order to be released publicly by Amazon. Jordan Kaspar did a great job of writing this up in his blog post and since I stole it for mine already, I'll steal it again:

Yes - that is a bit batshit crazy. Luckily though there is a simple library you can use, alexa-verifier. Jordan makes use of this in his post as part of an Express middleware, but obviously our OpenWhisk action is a bit different.

The last bit is the crucial bit. When using a web action, a JSON body is automatically parsed and available to your action as arguments. However, Amazon requires the original string as part of the verification process.

As of the most recent release (and yes, the OpenWhisk folks need to help broadcast cool changes like I'm about to describe, we're working on it :), you can now ask OpenWhisk to not parse the body and simply make it available to you.

This is documented now but it basically comes down to a few steps:

And here comes the super, super, super important thing. When you use this feature, you no longer have access to the arguments from the body as arguments to the function itself. Ok, let me rephrase that with a super small demo:

Given that action, if I POST a JSON string that included a name, it would be available as used above. But if I switch to raw-http mode (my term, not theirs), then args.name would not exist, unless I have a default parameter for the action with that name.

Yeah, a bit confusing. Personally I don't use default parameters very much, but if you do, and if you use this feature, than you're going to have to be aware of this to ensure you get the right value.

Here's a new version of the function above that would get name from the raw body:

Ok, so hopefully you're still with me. ;) Now let's look at the updated action:

I'll skip over the bits that didn't change from before and focus on the updates. First, I require in the alexa-verifier package. I needed to add a package.json for my action and switch to a zipped file for updates. To make that easier I wrote a simple bat file that zips and updates in one call. (If anyone wants to see that, just ask.)

Going down, you can see I fetch the headers as well as the raw body. I convert it to ascii, JSON parse it, and then grab the request value.

Then, I run my required values through alexaVerifier, and here it just plain works. That's really all there is to it. (As an aside, I had some questions for the maintainer of that project and they were very quick to reply and try to help!)

The final changes were to how I worked with the data Alexa sent me. Previously I was used the args object, but as I described above, I needed to change my code to get this from the parsed body.

And that's it! As I said above, my skill isn't yet verified, but I believe I'm close. There is one possible thing that I think I may need to add, and if I'm right, I'll post a follow up. But for now, I hope this is helpful!

Does the require('alexa-verifier'); still work for you? I am getting an error "cannot find module 'alexa-verifier'. I was able to npm install it, so the package is around, but maybe not in blue mix? Is there something you need to do to access packages I missed? I remember reading something from you that not ALL packages were there, but you were using it.

Remember you need to zip it. See: https://www.raymondcamden.c...

I typically end up making a shell script to make it easier.