I promise I won't be making every upcoming post about Mastodon, but as I realized I was pretty much limiting my Twitter use to posting about my new blogs, I figured why not automate that so I don't have to even open Twitter? And I'm automating the post to Twitter, why not do the same for Mastodon? As always, I look to Pipedream first when building integrations like this, and not surprisingly, the entire automation took roughly ten minutes. Here's how I built it.

Step One - the Trigger

For the trigger, Pipedream has built in a "New Item in Feed" action. I selected that and entered my RSS feed (https://www.raymondcamden.com/feed.xml). I then tested it to confirm it got my feed items. So to be clear, the entire "run this crap when a new item is posted" logic was done in about sixty seconds.

So, for this step, I wanted to create the text that would be used for both Mastodon and Twitter. I spent some time thinking about how I wanted to format this. In the past, I've sometimes done this for Twitter: "Blog Post: 'TItle of Post' link". I'll sometimes add a quick comment or shoutout to a product/service described in the post. I decided to make it even simpler for this workflow - the title in quotes, a line break, and a link.

I created a Python code step for this:

As I mentioned a few days ago, my first time working with Mastodon on Pipedream required me to use Node as the Python library wouldn't work well. The issue I ran into was fixed pretty quickly, so my assumption was that I was going to use Mastodon.py. However, along with Pipedream fixing that particular issue, they also added support for Mastodon as a defined account, which means you can set up your authentication (in this case, just the access token) system-wide and use it in multiple workflows.

They also added a basic Mastodon action for hitting the API. So for example, here's what you get when adding the action: 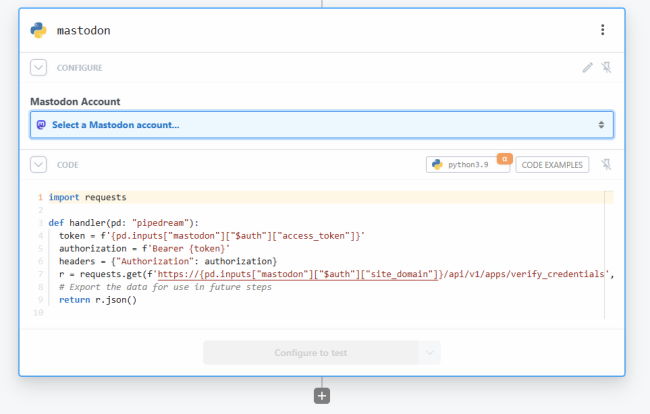 Once you've defined a Mastodon account, you can select it and then the code will be able to pick up on the authentication. Make note of the code - it's hitting the Mastodon API to verify credentials - a default call. But when I saw this, I was curious how difficult it would be to change this to posting a new toot.

Looking at that, I modified the default Python code a bit:

As you can see, I'm posting the text of my new blog post, and that's it. No need for Mastodon.py at all. Although I would use it if I were doing anything more complex.

Guess what? Posting simple text to Twitter has been supported in Pipedream for a decade or so. (Ok, maybe not quite that long.) I literally just added the action, selected my account, and used the same text I used for Mastodon.

I mentioned earlier that all of the above took roughly ten minutes, and that's absolutely true. I think most of that was googling for the Mastodon docs and as I had not used them before, it took me a minute or two to find what I needed. If you want to try this out yourself, you can create a copy of my workflow here:

Photo by Patrick Fore on Unsplash