I'm at a conference now working a booth (well, at least when I started writing this), and I really didn't realize how much I enjoyed this part of the job. While I've attended a few conferences post COVID (err, well, "post" may be too strong of a word), this is the first booth I've worked at in years. One of the first things I did when I arrived was check and see how we were going to get contacts via badge scanning. Not surprisingly, the conference organizers suggested a native app. Me being me - I immediately thought of how the app's features could be accomplished via the web. There's nothing wrong with the native app (actually, it's pretty buggy at times), but I dislike installing native apps for events. Nine times out of ten I forget to delete it off my phone even though I'll never use it again. I've now built a web-based version of the application, and while it's certainly ugly as hell, I thought I'd share how I did it.

The web app has the following features:

Let's go into detail on how I built each of these parts.

For the first part of the application, I needed a QR scanner. I knew that a web page could get access to a user's camera (via getUserMedia, an API I've used in the past) and I knew it could render it to screen via a video tag. The hard part would be looking at that stream and trying to find a QR code.

Luckily I came across a great library that simplified most of that work: https://github.com/nimiq/qr-scanner. The library handles getting camera access, displaying it on screen, and trying to find and parse the QR code. As an FYI, there is a native API for barcode detection that supports QR codes, but it's pretty much a Chromium thing only now. The QR Scanner library I used will make use of it if it exists though.

After grabbing the required JS library, here's how I used it. First, I began with a video tag in my layout:

In JavaScript, there are a few steps. First, I get a pointer to the DOM element:

Next, I make an instance of the scanner:

scanResult is a success handler. To start scanning, you use this method:

For my app, I tied this to a button you could click to start the scanning process. The success handler is passed an object that will contain, surprise surprise, the result of the scan as text. Now came the fun part.

When I tested my badge at this conference, the QR code contained vCard info. A vCard string is contact information in a somewhat simple format. (You can read more about it at the spec). Here's an example (source from https://docs.fileformat.com/email/vcf/):

It's not a terribly difficult format and I was able to find a few pre-built JavaScript libraries out there, but there were all a bit flakey. I decided to build my own, and while it's probably not completely robust, it does the job. My intent was to parse the fields as well as give them nicer names where possible. Here's the function I wrote:

For the most part, this is just string parsing, but note that some fields in a contact record have types, like addresses and phone numbers. The result of this function is a nice JavaScript object that's an array of fields with nicer names, values, and where it exists, types.

So going back to the scan operation, this is how I handle it:

I turn off the current scanner. Parse the data and save it as well as the original string in a global variable, and then update the DOM to reflect a new scan that came in. I use the name value as a label.

Did I mention that the UI wasn't pretty?

So, as a quick test, I asked my two best friends to send me pictures of their badges from recent conferences. One had a vCard and one did not, instead having some other weird ~ delimited format.

Alright, so at this point, my app can scan a badge, parse the vCard, and now we need to save it.

To handle persistence, I decided to make use of IndexedDB. A few years back, I went hardcore deep into client-side storage. I wrote posts on it, gave presentations, hell I even wrote a book on it. But as the space hasn't really changed much (as far as I know), I haven't used it much recently. I'm definitely going to be doing some more updated posts on the topic, but for now, I used the Dexie library. I plan on blogging more on this later in the month, but here's an example of how darn cool it is.

First, I set up an initialize my database:

In the second line, I define a collection named contacts with an auto number primary key and an index on a contact's name. I didn't end up using the index, but it's there if I need it. This is not a list of every part of the record I'll be saving, just the important information related to keys and indexes.

To actually save my data, here's what I did:

Yeah, that's it. I store the 'nice' contact, the original contact, and a date stamp. But that's literally it. In my app, I wanted to render the contacts. I began with an empty table:

The Dexie line is the toArray() part. Stupid simple and so much easier than "native" IndexedDB calls. Here's the oh-so-lovely result: 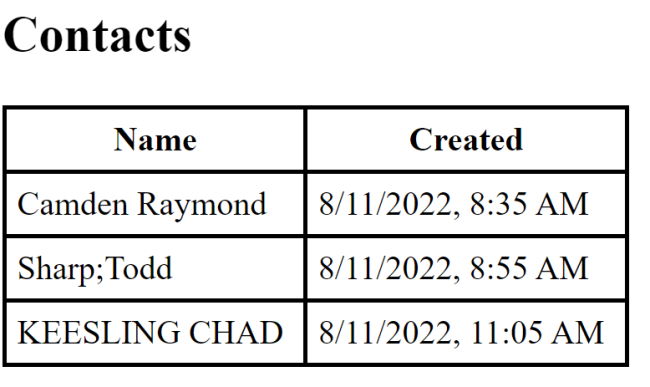 For the final part of the application, I added a button that would fire off a process to export and save the contacts. I found a cool library for this, JSZip. It's probably one of the easiest zip libraries I've ever seen. When combined when another library, FileSaver, here's the entire routine:

I grab the contacts, iterate, give them a name based on the primary key, and then just generate it and save it. That's it!

If you want to play with this yourself and have a QR code containing a vCard, you can see it online here: https://cfjedimaster.github.io/webdemos/badgescanner/index.html I also included a snazzy rainbow horizontal rule because why the heck not.

The complete code may be found here: https://github.com/cfjedimaster/webdemos/tree/master/badgescanner

Now, there's a lot to be desired with my demo. It's not mobile-friendly in terms of layout. Also, as easy as the QR Scanner library was to use, it did get a bit slow on me at times. I'd hold up my badge and have to wait for it to 'see' the code. Sometimes it was incredibly fast though. I could probably look at the library closer and find ways to improve the performance.

As always, if you've got an opinion on this, please let me know!

Photo by Claudio Schwarz on Unsplash