In my effort to keep practicing Python and build fun stuff to help me learn, today I built a few demos of using the New York Times API. I last played with this way back in 2014: "Using the New York Times API to Chart Occurrences in Headlines". In that demo I let you enter a simple search term and then I report on the number of occurrences of that term over time. I think my favorite image from that post is a search for "Internet":

Today the API popped up back in my head and I thought it would be fun to play with it again, this time in Python. I had some success with it today and thought I'd share the results. It's nothing too exciting and is basic Python stuff, but I love getting the practice and I did learn a bit, so that's always a good use of my time, especially on a Saturday, right?

Note that the New York Times API is free. You can sign up and get a key in seconds. Oddly, they don't link to their FAQ which includes important information about their rate limiting. (Spoiler - I hit it.) Definitely reference that before you go live with any real code.

My first demo makes use of the general Archive API. My intent was to return a random article for a day in history. Here's that script.

The day, month, and year, are all hard coded here. The Archive API lets you filter by year and month, not day, so first I get all the articles for a month and then I filter it down to ones that match the target date. Dates are still pretty hard for me in Python. I used strptime to get the day value out of the resutls from the API and had to build the match by hand. I wonder if Python has a way to make that simpler - like - look at the string and take a guess?

Anyway, once I've filtered to articles for a day, I then random.choice to pick one. I then print out the headline. I ran this a few times and here's the output: 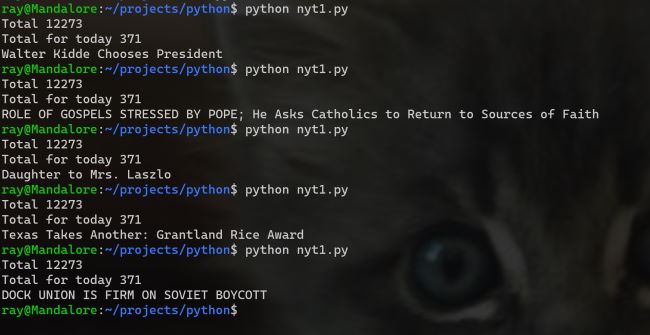 For my second iteration, I simply removed the hard coded year, month, and day. This gave me a bit more practice with Python date support. You can see that in the top portion of the code below.

Getting a random year and month was easy thanks to Python's random library. Figuring out the total number of days in the month was a bit harder, and by that I mean I had to google for it. The calendar module provides a simple API for it. I'll be honest - in the past I've been lazy with code like this and simply used 28 as a max day. Don't tell my employers. After that, it's pretty much the same code as before. Get by year/month, filter to day, and select one.

For my final demo, I decided to rebuild the logic I first did nearly ten years ago. Given a term, report on the number of occurrences in headlines over time. Not surprisingly, this is where I first hit the API limits. Thankfully Python has a sleep module to make it easy to 'slow' down my code. I also put a limit of 100 years into the code to make it a bit more reasonable. Here's my little command line utility:

As you can see, this script is meant to be run from the command like per the usage instructions printed if you don't pass an argument. Instead of a fancy graph (which I know Python can do, I'm not quite there yet), I simply output to the terminal. I also discovered that the requests library can handle URL encoding for you. I do that in the second argument to the get call. Also note I'm filtering the results to one key, web_url, because I don't actually care about the matches, just the count. I ran a test on this on "iraq war" and here's the result. I'm sharing this as text and not a graphic as it's quite big:

All in all, fun and fascinating! I've got some ideas on another demo with this but will call it quits for today. Let me know what you think.

Photo by AbsolutVision on Unsplash