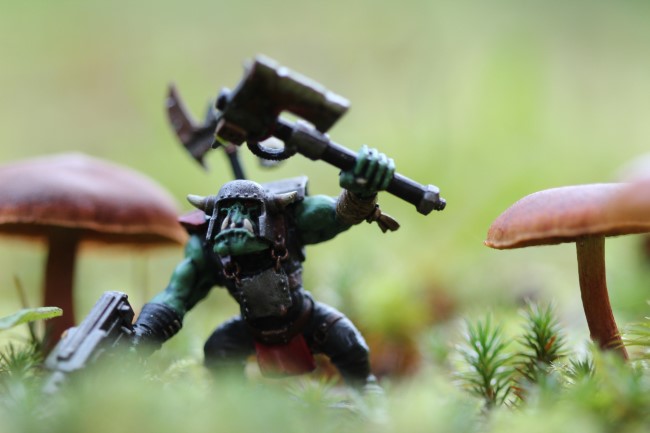 My frequent readers (do I have those?) will know I've got a thing for building random Twitter bots. I just like randomness in general. A few days ago I was thinking about an API I had run across, the Dungeons and Dragon's API. This is a free, simple to use API that returns information related to D & D. Pretty much every aspect ofthe ruleset is available via the API. Part of the API is deep information about monsters.

This got me thinking about what I could build with that information. I thought it would be kind of fun to pit these creatures against each other. Not in the "Godzilla vs Kong" fashion, but something simpler and - of course - sillier.

With that - I built @monsterconflict, a bot that shares a conflict between two different creatures. Here's a few examples:

A lawful neutral Satyr and a chaotic neutral Deep Gnome (Svirfneblin) are having a misunderstanding over a kitchen.
They resolve their issue by discussing the merits of cats instead.

A chaotic evil Kobold and a lawful neutral Lion are having a misunderstanding over a mouse.
They resolve their issue with an epic dance off.

Building this was fun because I ran into some interesting issues with the language of the conflict. Resolving those issues introduced me to some cool npm modules as well. Everything is built on Pipedream and you can see a complete copy (and fork it) here: https://pipedream.com/@raymondcamden/peaceful-d-d-bot-p_mkCGly6

The first step the bot takes is to get a list of all the monsters. This is done by making a call to https://www.dnd5eapi.co/api/monsters. That API returns an index of monsters that looks like so:

I figured this data doesn't change too often, so I made use of Pipedream's $checkpoint feature for some simple caching. Here's the entire workflow step:

Dylan Sather of Pipedream shared this workflow as another example of using $checkpoint to cache network calls. Be sure to check his example for a much nicer version of what I did above.

So - at this point we have a list of all the monsters. Selecting two by random is trivial. Initially I then made calls to the API to fetch more information about the creatures. But I realized I was only using one piece of information from that detail - the alignment. While I like the idea of my creature having it's "real" (according to the rules) alignment, I figured that having a random one instead would both save me two network calls and make things a bit more random. The next step handles that.

Basically I'm just getting random values from arrays - either my list of monsters or the list of alignment types. D&D supports the idea of "true neutral" which I just return as "neutral". Also, the monster names sometimes had things after a comma that I just drop.

Alright, now comes the interesting bit. I've got my two monsters - it's time to put them in conflict. I went with a generic form that looked like this:

Monster A and Monster B are TYPEOFCONFLICT over NOUN. They resolve it RESOLUTION.

For "TYPEOFCONFLICT", I just made an array of types of conflicts. Some serious, most silly. The NOUN part was interesting. I used the npm package random-word-slugs to generate a noun. This is typically used to create random strings based on real words. I use it to simply select a noun. This worked well into I noticed a problem. I began to see results like this: so and so are fighting over a umbrella". The "a" in that sentence shuold be "an". At first I thought I'd just write a utility function to check the noun and see if it starts with a vowell, but then I remembered there were exceptions, like unicorn. Turns out there's yet another npm package for this, indefinite. Give it a string and it will return "a" or "an". This worked well, if a bit complex in code. Here's the entire step:

Like I said - that last line there is a bit hard to read in my opinion, but it works so I'm not touching it. And that's it. The last step just posts the text to Twitter and that's the entirety of the bot. Don't forget you can see the entire thing here: https://pipedream.com/@raymondcamden/peaceful-d-d-bot-p_mkCGly6.

Photo by Anne Nygård on Unsplash