Welcome to the first of a series of some unknown length. For the past year or so (seriously), I've been looking at an old Node.js project I have and thinking about how I could update to it. I have to be a bit vague because it's a secret project I'm doing with some friends but it involved a number of features:

I used Express.js for the framework. The front end used a bit of JavaScript, but not much. Auth0 was used for login and registration with Passport.js being used as well. Ecommerce was done via Stripe and a simple checkout modal. This was followed by a POST handler in Node to record the order.

The site itself was fairly small. A few pages that were just text and a set of dynamic pages representing the main content. As I have to be a bit vague, let's pretend for now it is a movie site with the ability to load information about a movie via a path like so: /movie/urlslug, so for example: /movie/the-force-awakens.

While the site worked, the service it was on was moving past Node.js hosting and while I could find another, I thought it might be time to look into a Jamstack solution. As I said though, this has been on my mind for about a year now. While I feel really comfortable with the Jamstack, I just struggled with how to convert this existing site over, especially with the Mongo, login, and ecommerce aspects. I knew there were solutions for all of that, but again, I just struggled with the particulars.

Finally last weekend I decided to take a stab at it. I made some progress and after talking with some friends, I think I know how to proceed. While I can't show a "before" and "after" demo, I am working on a new demo that mimics some of the existing site. I'm not necessarily saying this is the best conversion, but I had to start somewhere. As always, I'd love your feedback in the comments below. With that out of the way, let me begin by covering what the features of this demo site are and the technology stack.

So that's nearly a thousand words, and I still don't feel like I've quite nailed it down precisely, but my entire reason for building this blog was to work through things that confused me (and excited me) and share them. I've got the first phase done so let me share what I did.

I began with an existing MongoDB database. (Actually it was on a service called mLab and I had to migrate it. That went painlessly.) MongoDB gave me my connection string information which I knew was going to be sensitive, so step one was adding it to my Netlify site an environment variable.

I then switched to Eleventy. My first page us a list of films and to get that, I'm using a global data file. Here it is:

There's a couple of things that are important here. First, I get my Netlify environment variable like any other, but for this to work I need to use ntl dev to run my site and not eleventy --serve. Technically ntl dev is doing that anyway, but don't forget. This is what will "inject" the environment variable. You can see it in your console: 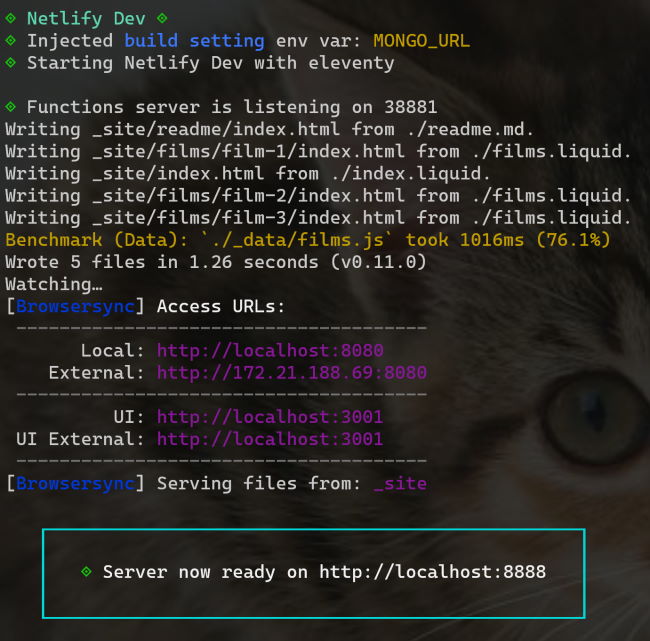 Although crucial aspect? Closing the Mongo connection. That's huge and cost me two days of trying to figure out why it could run locally but never built on Netlify. Huge thanks go to Dave Rupert for finding this issue and even submitting a PR so I could fix it in one click.

Notice that I'm doing a filter on "public" films. That was me replicating a feature of the 'real' site, the ability to have content that wasn't published yet.

So this gives me a list of films. I could then list them in my home page:

Next I needed to build one page per film. I did that like so:

This creates one page per film using a "slugged" version of the title. I mentioned earlier that I need to use Ajax to get additional data on films that needs to be "live", but I'll get to that later in the process.

I know this isn't a post just specifically about Eleventy, but I freaking love Eleventy.

Anyway, at this point I've got a static site driven by data in a MongDB database. It requires a rebuild on data editing, but for now it's got all the benefits of my older Node site (well, with a few features built) and zero need for a live server. Technically I'm running my MongoDB server 24/7, but I'm well within a free tier and the fine folks at MongoDB are handling the server. I trust them to handle that part.

You can see this running live here: https://hardcore-curie-802f8f.netlify.app/. And the GitHub repo is at: https://github.com/cfjedimaster/eleventy-auth0-serverless-mongo

That's it for now. The next version will implement Auth0 for login. It's going to be in the top nav and as you navigate, will remember that you're logged in. The code for that is done (again, via a friend of mine at Auth0), but it may be a few days. Again, if you have any comments, or if you've done this process yourself, please drop me a comment below!

Photo by Barth Bailey on Unsplash

Cool stuff, Ray. Until you may perhaps tweak the post to point people to the next parts, here are the current 2 and 3:
https://www.raymondcamden.c...