A few days ago I blogged about how I had started on a Vue.js RPG game a while ago and never got around to putting more work into it. This may be hard to believe, but building games is pretty hard! I realized though that the parts I most looked forward too, the more creative parts, were things that I could work on and just stop worrying about actually finishing the game.

That realization was incredibly freeing. It also immediately started the creative juices flowing. While walking my dog a few days ago (another activity that really improves my creativity) I formulated a good plan to build random monsters. One of the staples of many RPGs are random encounters. Your character, or party, is wondering the wilderness and all of a sudden they find themselves under attack.

The idea I had took a base set of monsters and then applied various modifiers and randomness to them. The idea being that you could have a small of monsters that would "scale up" to many more unique ones. Now, by "unique" I mean something like comparing a blue gremlin to a red gremlin. Many old games would take a base monster, apply a color shift to it, and call it done. Here's the basic flow of what I built.

First - define an array of monsters. For now, I just have five:

Each monster has a name, three attributes related to how well they fight (my game only has strength, dexterity, and intelligence) and their hit points. For each stat I assign dice rolls applicable for their respective strength as a creature. This was kinda arbitrary of course. I gave rats higher (possible) dexterity because I figured they were quick. I gave gremlins higher intelligence because, well, gremlins. 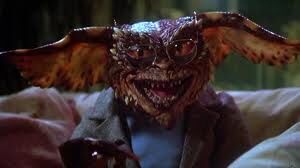 So the first step is to select one and then run the dice rolls for each stat. Next, there is a chance that a monster has a boon. A boon is a positive or negative change to one part of their stats. The chance for this change is based on a constant:

This is out of a 100, but I also make it a bit higher if the monster is scaled higher. I haven't mentioned scales yet but I will in a second. Here's the function that determines if the monster has a boon:

If true, I then flip a coin to see if it's a good or bad one:

Now I figure out what stat is changed by just picking a number from 1 to 3 (ok technically 0 to 2):

Now I have an if statement and based on boonType, either change STR, DEX, or INT. The boon does two things. It adds, or subtracts, a 1D6 value (roll a six sided die one time). For example:

Notice I also ensure the value doesn't go below 1. Next, I wanted a way to let the player know that there's something special about this creature. I created a list of "titles" for each stat and each type of boon, as well as whether they were positive or negative.

At this point, we've got a random monster, with random stats, although stats that make sense for how strong they are in general, and a potential boon that impacts their name, so for example, if face a clumsy pig, you may know this means their dexterity is lower than normal.

Alright, the final part comes in the scale I previously mentioned. In most RPGs, the monsters closer to you when you start out or relatively easy to take on. The farther you move away from the starting point, the stronger they get. My utility takes a scale argument. This scale can be any number. For example, a scale of 1.2 means a monster bit higher than normal. The scale does two things.

First, it improves every stat:

And remember, this is done after a boon. So a monster that got a bonus to strength will be incredibly strong after the scaling. Next, I created a set of titles that helped reflect the higher scale.

Scale titles are only used when the scale is above 2. A scale of 2.0 to 2.9 will use a random title from the first index of scaledTitles, and so forth. If you pass a scale of 5 or 6, it uses the highest tier.

So just to recap - while I only have 5 monsters now, the total number of variations is really high. And even better, to improve the set of possibilities, I can add a new base monster, add new boon titles, new scaled titles, as they come to me. Every single addition is a multiplicative change. I'll be honest, the actual is probably so so in terms of quality. I don't care. What excites me is that as soon as I get a creative idea, it's an incredible simple change!

Following the tip I previously posted about, I wrote a quick test script:

And here's some results: 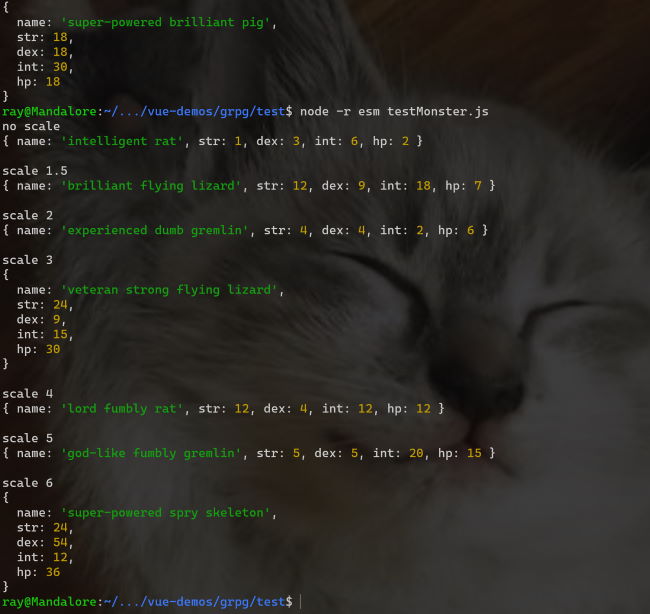 You can find this repo at https://github.com/cfjedimaster/vue-demos/tree/master/grpg. Feel free to make PRs to add new monsters and titles.

Photo by Anne Nygård on Unsplash