It's been a while since I built a game with Vue.js so I figured it was time to take a stab at creating another one. This time I've built an implementation of MadLibs. If you've never heard of this game it's pretty simple. You begin by asking a reader to enter various parts of speech, like a noun, verb, and so forth. You then put their input into a story for (typically) a funny result.

In researching options for this demo I found a few cool utilities. The first was the Madlibz API, an API that returns a random MadLib. I thought this was neat, but the content was pretty slim and I kinda wanted my final solution to be offline capable.

Another really cool resource was the Libberfy Mad Libs API. This one lets you pass text in and it spits out a MaLib version. You should check out his demo to see it in action. I didn't use this myself as my goal was to have pre-built MadLibs.

In the end I decided on a simpler approach. I'd have a data file that could be cached offline. I also wanted a data file that was easy to work with. Whenever it comes to stuff like this I always think JSON first, but for this application a text file made more sense. My format was rather simple. Use plain text for your MadLib and use single brackets around things you want to replace. Each MadLib is separated with a --- character. So here's a sample of how it could look:

Notice the ## My Birthday part? I allow for Markdown in the MadLib as well. The idea was that a non-technical person could easily edit the file to add content. Shoot, I'm technical and I find this much easier than JSON as well.

The actual application breaks down into three parts. First, a simple title screen: 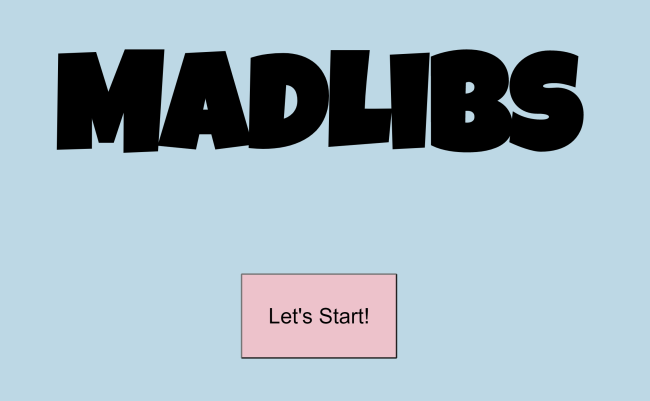 I employed all of my incredible design skills there as you can see. I won't share the code for this part as it's just what you see.

The next route handles prompting for the parts of the MadLib. I show one prompt at a time. A user on Twitter suggested asking a progress bar here and I agree that it would be a good change.

Let's look at the code for this. I'm skipping the styling part but you'll be able to see everything in the repository. (I'll share the link at the end.)

So initially my code called out to my Vuex store to setup a MadLib. Doing this will give me a MadLib set of prompts, an array of things like noun, country, and so forth. In my UI then I can render one at a time and accept user input. You'll see that when I've answered every prompt, I move the user on.

This was all pretty easy. What took me the most time was getting the darn focus() stuff working correctly. I wanted to make it easier for kids so they wouldn't have to use the mouse as much. I did get it working but I don't believe I've done it the best way possible.

I'll skip the code for this route as well as it just uses a Vuex method to get the rendered HTML. Let's look at that store:

So there's a few things going on here but the main aspects are where I load the MadLibs and when I render one. Loading involves making an XHR request to my text file. I parse it (splitting on ---) and then doing some basic parsing of the values within tokens. The result is a MadLib object that has an array of prompts (as well as the original text).

Rendering then is a simple matter of replacing the tokens with the user's inputs. The final step is passing it through the marked library to convert the Markdown into HTML. Don't forget that when you pass HTML into a value to render for Vue, you need to use the v-html directive:

And that's it. You can view the complete source code at https://github.com/cfjedimaster/vue-demos/tree/master/madlibs. I've got a version up and running at https://madlibs-sooty.now.sh/. Note that I did not go ahead and turn it into an offline-capable game. Honestly, I don't have the energy right now. (By the way, it's my birthday. I'm old.) However it wouldn't be too difficult to add that in.

Hey Raymond, thanks for sharing this code. This is exactly what I was looking for as I start my vue.js journey. Also, congrats on the book!