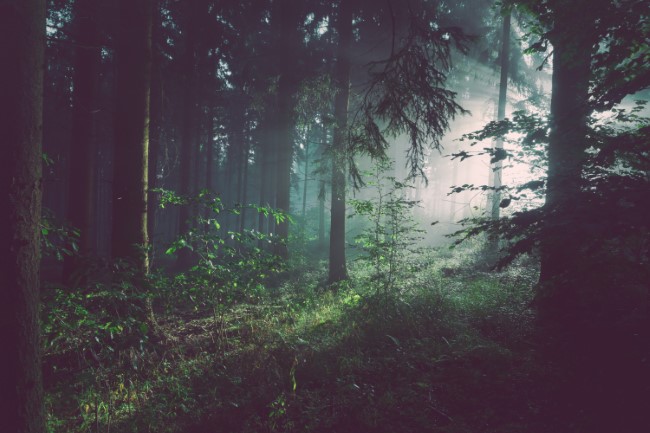 This weekend I was on the road and had some time to build (yet another) application with Vue.js. I don't think this one necessarily does anything terribly cool. At minimum it was more "exercise" for my Vue muscles and provides another demo I can share with folks. As always though, if you have any suggestions or feedback in general, just let me know. If posts like these aren't helpful, also free free to share!

Let me start by giving a high level overview of what I built. I'll start with a few screen shots. The initial page shows a list of all fifty states. 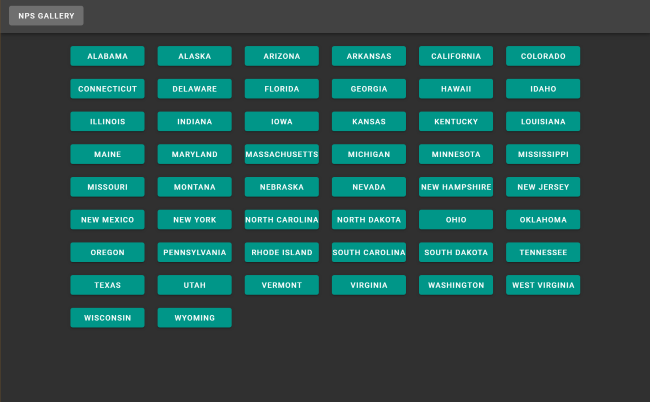 Selecting a state will then make a call out to the National Park Systems API to ask for all the parks within that state. I then render them out: 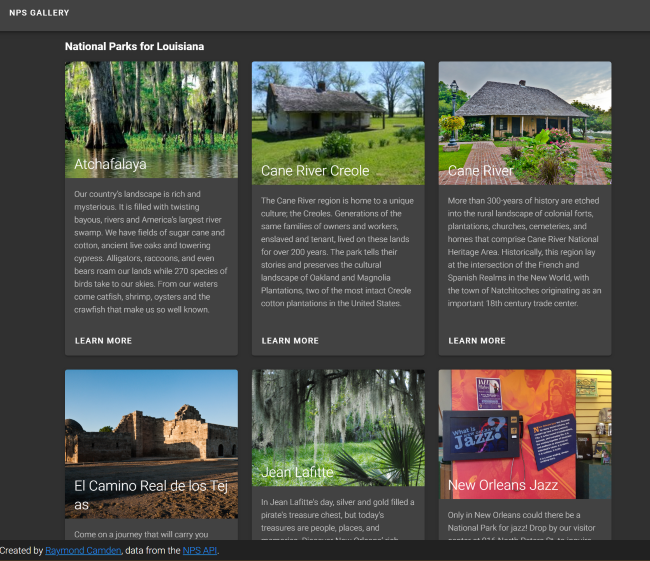 Behind the scenes I'm using the following technologies:

Before I dig into the code more, you can find the complete repository here: https://github.com/cfjedimaster/vue-demos/tree/master/nps_gallery. You can run the demo here: https://npsgallery.raymondcamden.now.sh/

Alright, so I'm not going to share anything about the first view of this page. I've got a hard coded list of the 50 states (and abbreviations) I store in my Vuex store and I simply fetch them to render. The only part that was interesting here is that I discovered the <router-link> will correctly handle URL encoding values:

In the link above, note that I can safely use the state value without worry. I should have expected this, but I was happy to see it worked well.

It's the state view where things get interesting. First, the main view component, which is pretty simple since my complexity lies elsewhere.

You can see I'm rendering values by binding to a parks variable that comes from my store. You'll notice I'm calling two things in my created related to the store. I first call clearSelection and then loadParks. clearSelection removes any previously loaded parks from the view and loadParks obviously fires off the request to load parks. Let's look at the store now because here is where things get a bit deep.

So the biggest thing I want to point here is that I'm using the store to wrap calls to my API and as a simple cache. Anytime you ask for parks for state X, I first see if it's cached and if so - return it immediately. Otherwise I make a call out to the API. It's a pretty simple system but I love how it came out, and performance wise it works really.

The API part is actually two fold. You can see I load in './api/nps', which is yet another wrapper:

All this does is call my serverless function. The NPS API doesn't support CORS so I need that to handle that aspect. I also do a bit of filtering to ensure we get images back. (Although this doesn't seem to work perfectly - I think some parks have images that 404.) The final bit is the serverless function:

If you want to know more about serverless and Zeit, check out the article I wrote a few days on it.

Anyway, that's it! As I always say, I'd love some feedback, so leave me a comment below.

Thanks for the article, very informative.

I had to add an (empty) .eslintrc however to the root of the cloned repo, to get it compiled.

Otherwise it would throw the Error: No ESLint configuration found message.

Sorry - I had the same issue when cloning to a new machine. When I can I'll commit that.

Thanks for this post - my deployed version just works and looks great! However, my local version [using 'now dev'] shows errors in the console and nothing is displayed. They are 'is not a valid JavaScript MIME type' for chunk-vendors[xxxxx].js and app[xxxxx].js. The console also shows SyntaxError: expected expression, got '<'. Any ideas what I might be doing wrong to view the app locally?

Makes sense. I tested and the Vue app/API do run separately. I tried editing 'nps.js' to use 'http://localhost:3000/api/npswrapper' but a CORS error message shows in the console. Hmmm. I'll keep trying...

So, I just tested it DOES work, although it's a bit slow to setup. Just now dev, and then hit the URL. Make sure you add a .env file NPS_KEY=X, where X is your key.