I've been spending the last year working with, writing about, and presenting on my favorite framework, Vue.js, and realized that I had yet to look into error handling with Vue. I'd like to say that's because I write perfect code, but I think we all know the truth of that. I spent some time the last few days playing around with various error handling techniques provided by Vue and thought I'd share my findings. Obviously this won't cover every scenario out there, but I hope it helps!

In order to test out the various error handling techniques, I decided to use three different kinds of errors (initially anyway). The first was simply referring to a variable that doesn't exist:

This example will not display an error to the user but will have a [Vue warn] message in the console.

You can view this example here:

See the Pen Error1A by Raymond Camden (@cfjedimaster) on CodePen.

For a second example, I tried a variable bound to a computed property that would throw an error:

This throws both a [Vue warn] and a regular error in the console and doesn't show anything to the user. 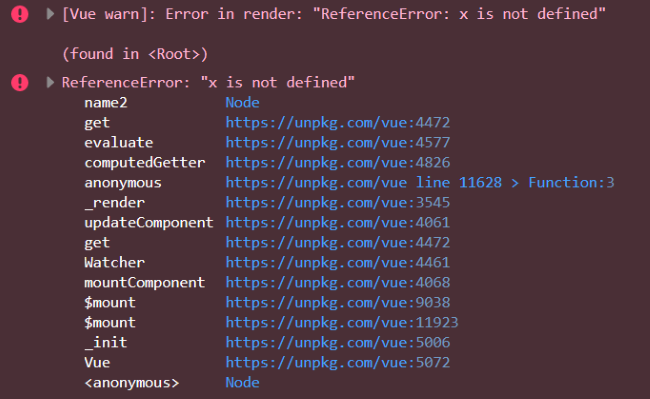 Here's an embed for this.

See the Pen Error1B by Raymond Camden (@cfjedimaster) on CodePen.

For my third error, I used a method that would throw an error when executed.

Like the last one, this error will be thrown twice in the console, one warning and one proper error. Unlike last time, the error is only thrown when you actually click the button.

And here's the embed for this one:

See the Pen Error1C by Raymond Camden (@cfjedimaster) on CodePen.

Ok, before we go on, I just want to be clear that this isn't representative of every type of error you can create, it's just a baseline of a few that I think would be common in Vue.js applications.

Ok, so how do you handle errors in Vue applications? I have to say I was a bit surprised that the main Vue Guide did not have a clearly defined section on error handling. 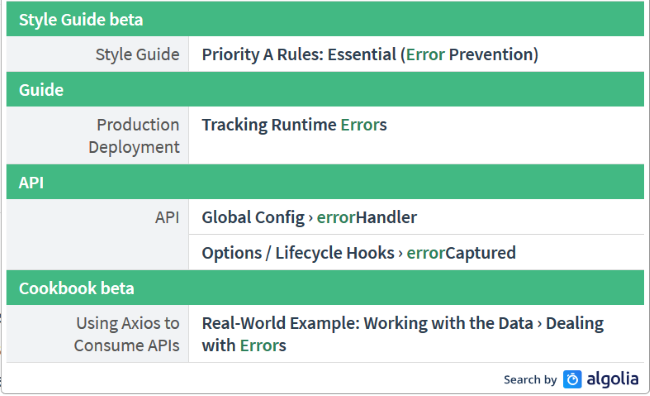 Yes, there is one in the guide, but the text is short enough to fit in a quote:

If a runtime error occurs during a component's render, it will be passed to the global Vue.config.errorHandler config function if it has been set. It might be a good idea to leverage this hook together with an error-tracking service like Sentry, which provides an official integration for Vue.

In my opinion, this topic should really be called out a bit more in the docs. (And frankly that's on me to see if I can help the docs!) In general, error handling in Vue comes down to these techniques:

The first technique we'll look at is errorHandler. As you can probably guess, this is a generic error handler for Vue.js applications. You assign it like so:

In the function declaration above, err is the actual error object, info is a Vue specific error string, and vm is the actual Vue application. Remember that you can have multiple Vue applications running on one web page at a time. This error handler would apply to all of them. Consider this simple example:

For the first error, this does nothing. If you remember, it generating a warning, not an error.

For the second error, it handles the error and reports:

Note how the info in the two previous examples is pretty helpful. Now let's check the next technique.

The warnHandler handles - wait for it - Vue warnings. Do note though that this handler is ignored during production. The method handler is slightly different as well:

Both msg and vm should be self-explanatory, but trace would be the component tree. Consider this example:

The first error example now has a handler for it's warning and returns:

Warn: Property or method 'name' is not defined on the instance but referenced during render. Make sure that this property is reactive, either in the data option, or for class-based components, by initializing the property. See: https://vuejs.org/v2/guide/reactivity.html#Declaring-Reactive-Properties. Trace:

The second and third examples do not change. You can view embeds for all three below:

See the Pen Error1A with Handler by Raymond Camden (@cfjedimaster) on CodePen.

See the Pen Error1B with Handler by Raymond Camden (@cfjedimaster) on CodePen.

See the Pen Error1C with Handler by Raymond Camden (@cfjedimaster) on CodePen.

The third method I'll demonstrate is renderError. Unlike the previous two, this technique is component specific and not global. Also, like warnHandler, this is disabled in production.

To use, you add it to your component/app. This example is modified from a sample in the docs.

If used in the first error example, it does nothing, which if you think about it kinda makes sense as the first one is throwing a warning, not an error. If you test it in the second one where the computed property throws an error, it is rendered. You can see it in the embed below.

To be honest, I'm not sure why I'd use this when the console would be more appropriate, but if your QA team or other testers aren't familiar with the browser console, having a simpler error message on screen may help.

For the final (Vue-specific) technique, we have errorCaptured, AKA the technique that confused the heck out of me and frankly still confuses me a bit. The docs have this to say:

Based on my research (and again, I'm definitely shaky on this), this error handler is only to be used by a "parent" component handling an error from a "child" component. It can't, as far as I know, be used in a main Vue instance, but only in a component with children.

In order to test this I created a parent/child set of components like so:

Notice how the kitten component has an error in it. Now if I try to use it like so:

I'll get a message from the handler:

cat EC: TypeError: dontexist is not a function info: render

You can view this in the embed below.

See the Pen Error1 by Raymond Camden (@cfjedimaster) on CodePen.

So yeah... interesting feature. I'm guessing it would mostly be used by people building component libraries with parent/child type relationships. More a "library developer" feature than a "regular developer" feature if that makes sense. But again - that's just my initial impression of the feature.

The One Technique to Rule Them All: window.onerror 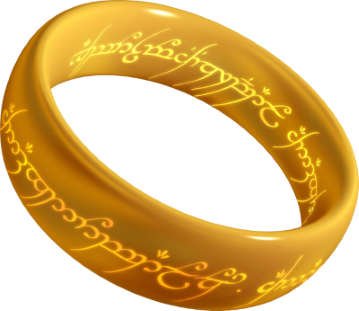 The final (and most powerful) option is to use window.onerror, a global error handler for anything that can possibly go wrong with your JavaScript. The handler takes the form of:

Probably the only thing you can't guess above would be source which is the URL of the script.

Here's where things get interesting though. If you define this, and do not use Vue.config.errorHandler, then this will not help. Vue expects you to define the darn thing and if you don't, will not propagate the error outside itself. I ... guess that makes sense? I don't know - to me that doesn't necessarily make sense. Even odder, let's say your Vue error handler has an error itself. That won't propagate to window.onerror either.

Here's an example CodePen. I've commented out the error in the errorHandler, but if you remove the comment, you'll see the global error handler isn't run. The only you can see the global handler run is if you click the second button.

See the Pen Error1C with Handler (window) by Raymond Camden (@cfjedimaster) on CodePen.

I hope this made sense. As I said in the beginning, this was my first foray into the topic so I'm definitely looking for comments, suggestions, and corrections. I'd love to hear how people are using these techniques in their own apps!

Thanks for writing on this often overlooked subject. Definitely plan on picking out some of your examples to add a global error handling function for my apps.

Thanks for this great article! I wrote about a similar topic in my own blog: https://markus.oberlehner.n... The article is about one possible approach how the `errorCaptured` hook can be used for implementing a generic error reporting solution in your app using the concept of renderless components.

This was really neat - thank you!

Thanks for the write up. It was interesting seeing these handlers explored. I have always just used the default settings. One thing I noticed is by combining the errors into one log you miss out on some critical stack trace information. By logging the error on its own you can take advantage of this: https://codepen.io/getrewor...

After playing around a bit, personally, I think the default error handling is better as is provides you with a more concise stack trace.

For example in this screenshot the first set of errors (in white) are from your custom handler, whereas the second set (in red) are from the default handling.

Here I can see exactly what method caused the issue, what type of error it is, and in which js file the it occurs. Perhaps these error handlers are more useful when used in production along with tracking services such as Sentry or Bugsnag.