As a child of the 70s, I grew up in the beginning of the video game boom. But while I had a console (the venerable Atari 2600) pretty young, for me, the real video game experience was to be found at arcades. I cannot even fathom the amount of quarters I sunk into these machines growing up and as much as I appreciate the power of modern consoles, I really miss the arcade experience. I still get the opportunity to play a proper arcade game every now and then, but it will never quite live up to the memory of loud, noisy, buildings packed to the rim with arcade games trying to get your attention (and money).

As a kid, one of the shows I remember watching often was Silver Spoons. This was a (pretty bad) 80s sitcom about a single father raising his son in a mansion. And while the show is pretty much forgettable, there's one aspect that I remember noticing the very first time I saw the show: 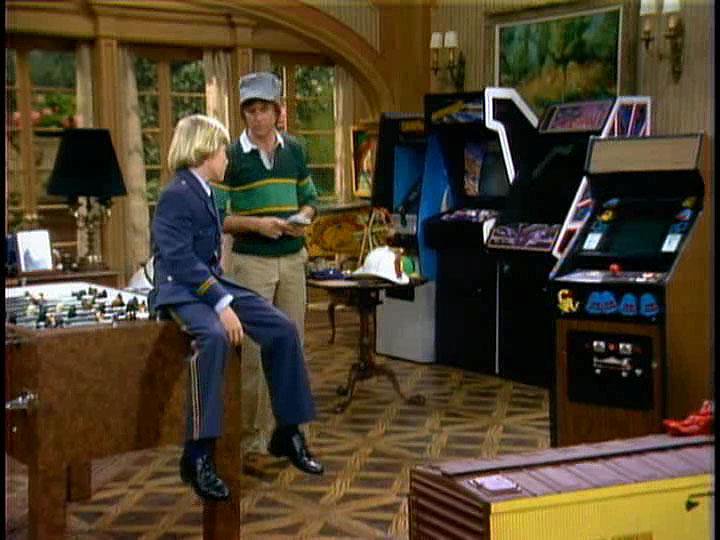 In their house (ok, mansion) - they had - arcade games. Like, real, arcade games. As a kid, this blew me away. The idea of having the arcade at your house and being able to play for free, whenever you wanted, seemed like a fantasy, surely no one could really do that, right? In fact, for most of my life my definition of "rich" was having arcade games in your own house.

Over the past couple of years, I've definitely look into getting my own arcade machine, and while most options weren't "stupid" expensive, it certainly wasn't in the "impulse buy" range. Also, I'm not terribly good with hardware and from what I know the older machines need a lot of TLC that I don't have the skills (or time) to give. Now, at this point, someone's thinking, "Why doesn't he just make a MAME cabinet?" Well again, see my comment about now being good with hardware, and secondly, MAME ROMs are really difficult to get right. My um, "friend" has noted that while it is ridiculously easy to get HD copy of a new movie, it can be near impossible to get a good copy of a classic arcade game. More trouble than it's worth for sure.

Then I heard the news about Arcade1Up. Arcade1Up offers arcade machines at a good price ($299) and a smaller scale - 3/4th size. Here's the image they use on their site to illustrate the size: 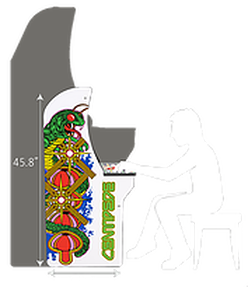 Here's my machine in my office (pardon the mess) to give you an idea of what this really means: 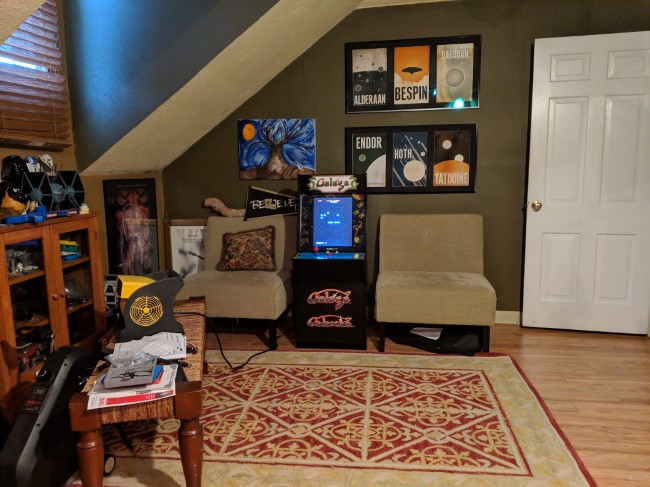 Arcade1Up offers six different machines, each with a different set of games. There's also a "12 in 1 Atari bundle" you can only get at Best Buy that I'm fairly sure will be my next purchase.

If the size seems too small, you can buy a cheap(ish) riser, but honestly, I like the size. When I play I roll my office chair over, play a game, then roll it back.

When I made my purchase, I had two main concerns - how difficult it would be to put together, and how it would feel to actually play. Let me address each.

Ok, so when I said I don't like to build things, let me reiterate. I. Don't. Like. To. Build. Yes, I know that's like a sin for a programmer, but outside of LEGO I just don't enjoy putting things together. I'm constantly afraid I'm going to screw something up or break something with my big clumsy hands.

While they have a nice five minute video showing you how to put it together, I stuck to the written instructions and took my time. In total it took me a little over an hour. Out of the 25 steps or so, only two caused me issues and it was due to slightly awkward positioning of something I had to screw in. Also, it was a bit dark where I was building and things improved when I had one of my kids hold up a light for me. Obvious, right? Again, I suck at building.

I think most folks could probably get it done in 30 minutes. The hardware is "firm", not flimsy at all. I believe they list the weight at 60 pounds, but it feels a bit less than that. I had no trouble moving it.

In case you're curious how it ships, it comes in a flat box roughly the size of a TV. 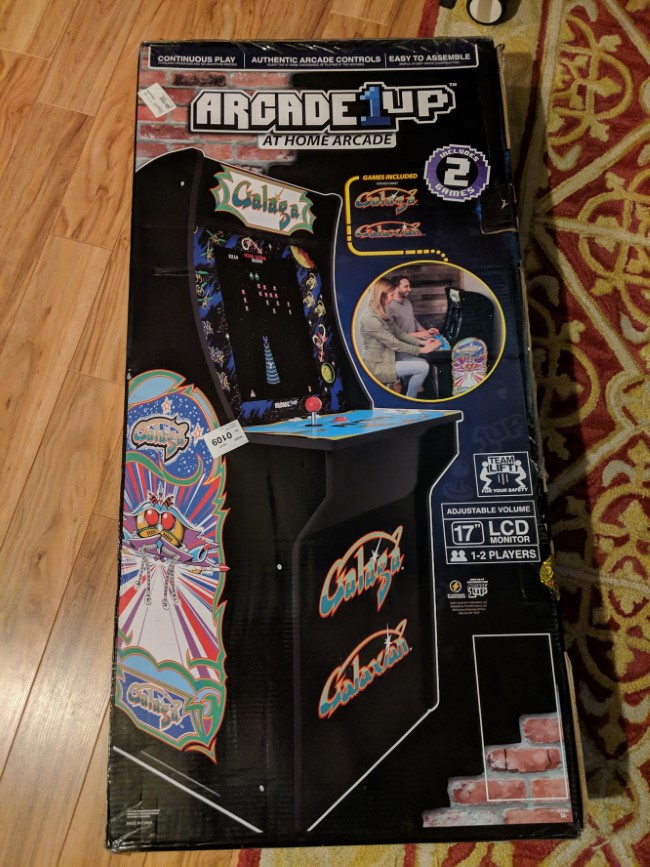 So - the million dollar question - what's it like to play? Galaga isn't necessarily a physically crazy game like Street Fighter, but it can get pretty intense, especially at later levels.

I can tell you that it plays absolutely perfectly. The joystick feels natural, if maybe a bit firm. But I'm used to different machines have a slightly different feel to their controls so after one game it felt right to me. The game itself is perfect (except for a few things I'll note below) and the speaker is nice and loud (and you can turn it off too which is nice). I've played maybe four games so far and it feels just like the arcade. I'm sure it isn't exactly perfect, but to me it's exactly what I wanted.

I find myself walking into my office, looking over at it, and just smiling. That may seem silly, but finally having an arcade machine in my house, even if a smaller reproduction, makes me giddy. It's a roughly thirty year old dream of mine realized and I am completely happy with the purchase.

Ok, so what problems have I encountered? Two very small ones that I don't think would bug most people. First, after playing a game, it ends in a "start new game" mode, ie, it's waiting for you to hit start again. To get it back to "attact mode" (where the game shows you how to play, shows the high score, etc) you have to hit the Player 2 button for 5 seconds. I know it sounds silly, but I always do this because to me, that "attract mode" is where it should be when no one's playing.

The second issue is a bit weirder. The high score displayed on screen crops off a digit. So for example, my current high score is 158050. But in "attract mode", the score is shown as 58050. When the high scores are displayed the number is right, but it kind of bugs me that it doesn't show off the proper value, and as I'm rather proud of my Galaga scores, I wish it didn't do that.

Both issues are something I can get over and as I said - will not dissuade me from getting a new one.

Again, I'm really happy I got this. As I said, just seeing it puts a smile on my face. If folks have any specific questions that I can answer, just leave me a comment below and I'll do my best to answer. I absolutely recommend it and I'd love to hear from folks who pick one up.

Nice review, thanks! I'm the part owner of an original Sega Outrun arcade machine that I got a lot of enjoyment from.

There's actually a way to fix that score cut off issue if you contact arcade1up they can send out a replacement pcb that fixes 3 issues one being sometimes galaga and galaxian will freeze up causing the game to be entirely unplayable unless turned on and off again the next being the tip of the ship in galaxian is the wrong color it should be red not white and then obviously it fixes the issue with galaga not properly displaying high scores i had contacted arcade1up about it and they had sent me a different pcb that was easy to install and fixed everything I now have a high score of about 240,000

I appreciate that but I'll probably pass. As technical as I am, I'm not a hardware person. :)

It's actually not hard at all to install lol I am not all that tech smart with these things either but it was super easy all you do is take the backdoor off the game and on the back of the monitor theres a little metal plate being held on with 2 screws unscrew it and the pcb is in there then you just detatch the cables one by one unscrew the black ground wire take the new pcb put it in replace all the wires in the same way you took them off put the monitor cover back on and the back door back on fire the game up and presto! it should be fixed then but I can understand for some people even simple things cab be confusing even for me sometimes