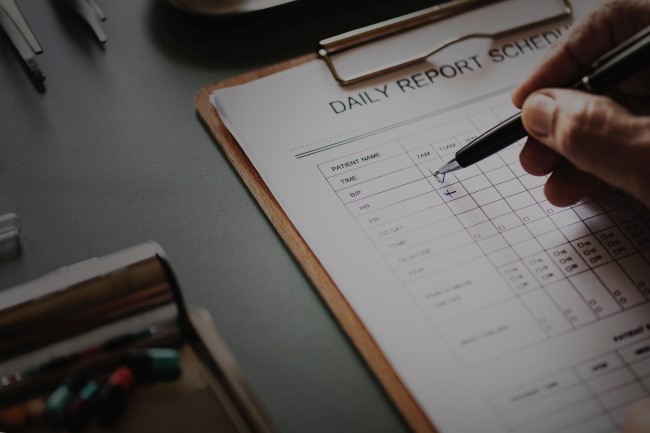 As I've mentioned recently, I'm currently working on a NativeScript Vue application for a client and as part of that work, I'm dealing with custom forms. My initial approach made use of custom components, which Vue made pretty trivial, but I've decided to give NativeScript UI a try. This is a set of free components covering the following features:

Specifically, DataForm looked like it could be useful. While it's not too difficult to build forms with NativeScript, DataForm attempts to automate as much as possible of the process. As an example, consider the following data:

Now imagine we tie this to a dataform control:

And if we literally leave it at this - the control will automatically render a nice form for us:

Notice how the control looked at my data properties and figured out what controls to use as well as how to create labels. yearBorn for example becomes Year Born. This all happens by default and is freaking cool, but you can control all of this as well if you don't care for their defaults.

All in all a neat little control, but I ran into some issues right away as soon as I started trying some of the more advanced features. Part of this is due to some poor docs (I've already sent reports in!) and I hope this post can help others avoid the issues I ran into.

So the docs tell you to install the relevant plugin, but right after that things go a bit awry.

The "Getting Started" for the Vue docs and DataForm, which isn't even labelled that (in the nav it's called "Provide the Source" tell you to do this:

"Add this to the main Javascript or Typescript file, usually called main.js or main.ts:"

"Before proceeding, make sure that the nativescript-ui-dataform/vue module is required inside your application. This module handles the registration of the custom directives and elements required by nativescript-vue.

After that simply add the RadDataForm tag to the HTML and set its source accordingly: "

So that first paragraph didn't make sense. I mean, didn't I already do that? To make matters worse, the code sample below doesn't provide any additional help.

I was only able to get things working by going to the NativeScript Playground, dragging a DataForm control on the page, and looking at what it did.

Based on that, this is what worked for me:

Looking at that code, the paragraph I quoted above makes sense now, but I had no idea what code to even use. If the code sample on the page had included this, it would have saved me about two hours - I kid you not.

Alright - so the main reason I even looked at the dataform control was to make use of the "groups" feature. This lets you take a large form and create groups that can ben opened and collapsed. It isn't an "accordion" control per se, but it achieves the same purpose. (For folks curious, there is a NativeScript Accordion control but it has certain restrictions that made it unusable for my case.) Here are two screenshots I stole from the docs - first the Android version: 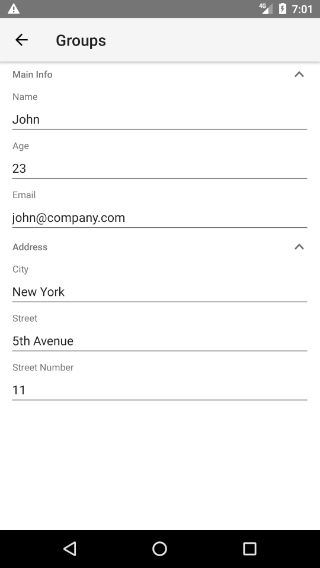 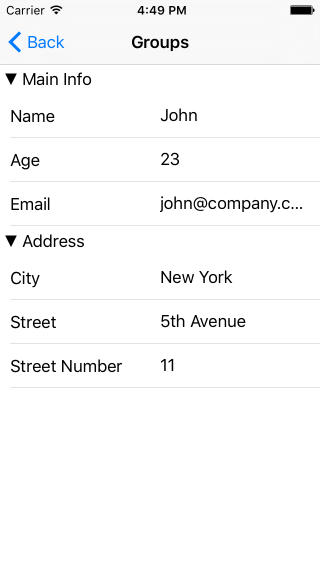 So, while cool, the docs on this were pretty slim, especially in regards to providing dynamic groups, by that I mean groups defined in data and not hard coded as tags on the page. I spent a heck of a lot of time trying to get this to work and finally gave up and asked for help on the NS Slack group. Thankfully @bundyo came to the rescue. What follows is his solution, not mine. My data is still hard coded but you can see where it could be modified to support data loaded from Ajax or some such.

Let's break it down. First, look at the dataform:

There's two new attributes here - metadata and groups. So metadata is where you can do overrides on the default behaviors of the control. Don't like the label it selects for your property value? You can tweak it here. Want to use a custom drop down with specific values? You can set it here. We use this feature to specify the groups for each field. (And again, it's hard coded here but it could be dynamic.)

The next part is creating the groups. In this case we use an instance of PropertyGroup, one for each group, and ensure that the names match the names used in metadata.

If you want to see, and play with, a slimmer version, check out the Playground @bundyo made here: https://play.nativescript.org/?template=play-vue&id=qWbsL5&v=3 It really does a nice job of setting up the groups and fields all in one fell swoop. And because it's on the Playground, you can point the NativeScript Playground app at it and have it running on your device in 10 seconds. 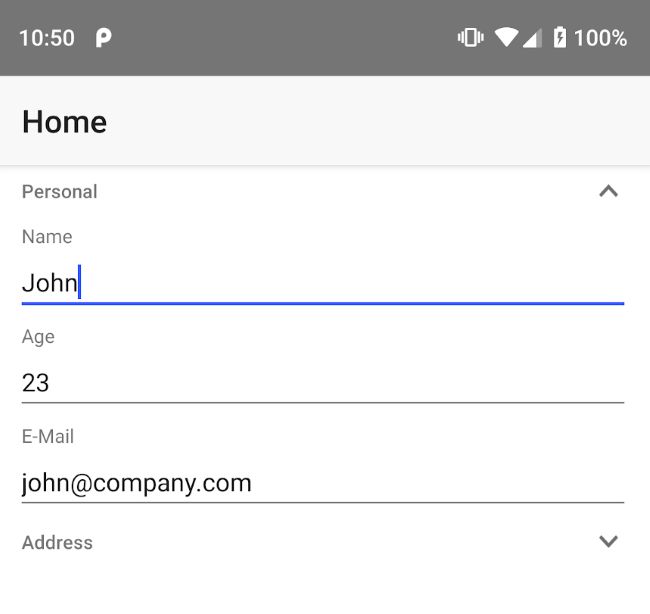 Anyway, I hope this helps. As I said, the docs here were a bit painful, but I've sent multiple reports in to the NativeScript folks so hopefully it gets improved soon. If you have any questions, just drop me a line below!

the lack of complete vue examples is worrying. too bad, because vue + vuex is awesome

IMO, the Vue stuff is growing. It's certainly not just me blogging about it. :)

Impossible to make it run. My error message is: "Cannot read property 'ExpandableEditorGroup' of undefined". It's an issue coming from the plugin. It's buggy. The proof is that you had to make some unnecessary magic when doing this part:

For a very well known plugin, getting into this issues is unbelievable.

Note: Sorry but I was playing with the feedback icons and I click on "Sad" but the article is good. I don't know how to change it to "Upvote".

I found a workaround. See: https://github.com/NativeSc...

But even after the tns update (that should fix everything), the "magic" of registerElement is still required...

But how do we get the input values in Vue? How do we submit the form? Have you found any way to change the styles of a Picker input?

1) Since you tie the form to your data, your input values is your data. Does that make sense?

2) Submitting is something you would do yourself via an HTTP call.

3) And sorry - haven't done anything with styles.

Submitting the form would be done via click handler on a button. The data doesn't need to be captured, it's already there. Remember we find the form to your Vue data. So you have it already.

Thanks You are right

One more query I was checking example 1 where in dropdown list was created but a converter function which i don't understand how it works can you add. https://docs.nativescript.o... Example 1. How do we handle the drop down list box values changed.

I'm not quite sure I get what you are asking. Are you asking for an example of how to handle drop downs, and by handle I mean provide the values? If so the docs you linked to do show that. Maybe you can rephrase?

can you fork this example https://play.nativescript.o... Kindly check Test.vue field movie is drop down list box kindly check line no 92 I want to add array having id, text filed array. Once I submit the form should get movie=1121.

Sorry came from Desktop application development we called it Lisbox as Drop Down List Box (DDLB).

its not working here is the code can you forked and check https://play.nativescript.o...

I've been on the road. I see your request below and will look into it when I can.

Don't woory I resoled this issue I will create a playground and post it soon. Thanks for your help

Its working just add dataEntry component and remove it will update NPM pacakges and it works.

can you add date picker with date format that is completely missing in documentation.

yes thaks I reported lot of missing documentation for vue but unfortunately I didn add my email address so i didn't get any notification. Now I saw it was reflecting. Now I will remember it. Thanks but your blog powered us to make it possible.

Just need a suggetion from you Since vue next version comes up with Typescipt. What you will suggest to moved it to Typescript or continue with Javascript?

I say work with what makes you most productive. I like TS, but don't use it very often.

Hi Raymand, thx for your great article. If i try this, my iOS-Form looks very weird. Is there a fitting css for this form? This is what it looks like: https://uploads.disquscdn.c...
Thanks in advance. Greetings from germany. Ralf

Thanks for that, it helps a lot on understanding the radDataForm, but it still lacks so much information on how it works that seems faster to create my own vue form components than using it :/
I'm 1 day long trying to figure out how i change datepicker output format.. so annoying..

Sorry - I haven't used NS in a while now.

¿Do you know how to add an image label to my field? using the metadata JSON it doesn't work