For the past few years I've been doing a couple of "end of year" posts, one of which contains a list of the favorite books, music, movies, and video games I've enjoyed over the past year. This year feels like it went by in a whirl. Regular readers know I was out in the fall for my last adoption (and truly, this is it, seven kids is enough), but what folks may not know is that the adoption process is pretty lengthy. It feels like it consumed most of my year. Obviously it didn't, but it seemed like this year didn't leave a lot of time for "media". And that's ok - I love that my family has grown again, but this recap is going to be a bit slim.

So let's start with the slimmest of categories - music. I liked nothing this year. Zip.

Ok, no, that's a lie. But a few days ago I was thinking about the songs that seemed to be the best for the year, and discovered they were the exact same ones I mentioned last year. This isn't to say I didn't hear good new music. Once again my buddy Brian Rinaldi was my main source for that. (Check out his favorite tracks of 2017.) But nothing really stands out. I loved the Atomic Blonde soundtrack and I'll talk more about that in a minute, but in general, I'm just not terribly excited about anything.

I will say that the lackluster Iron Fist did have some dang good tracks, my favorite being this one:

9 books. That's horrible. To be fair, I've got a two year old now who has rocked my world and some of the books I finished were 500+ doorstops, but I just don't know what in the heck happened here. Certainly there are greater priorities in life, but damn, I really want to do better.

Also - when I shared this list, someone pointed out that I didn't have one book by a woman author. It certainly wasn't intentional, but is something I want to address in 2018. As a start, I've added the "Dragon Riders of Pern" to my Amazon Wishlist. This is a classic I never got around to reading so I plan on fixing that next year. Here's my 2017 list: 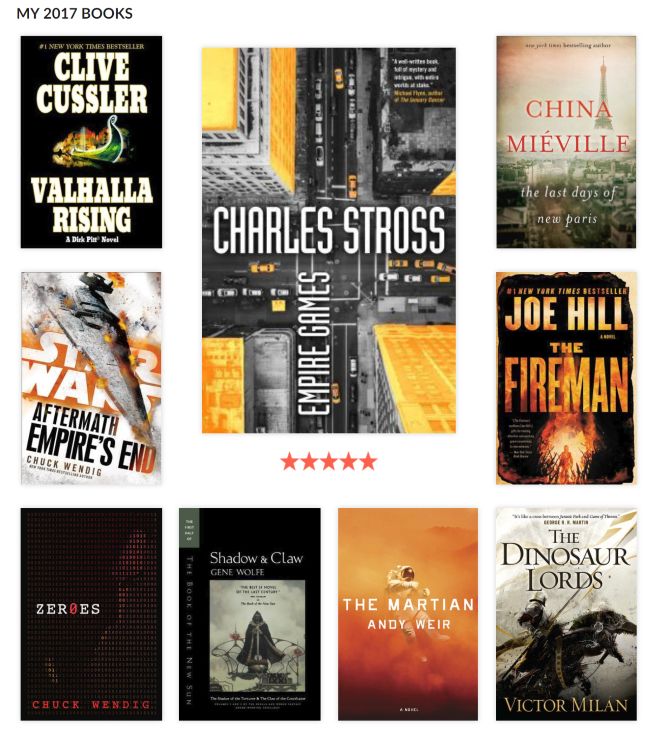 My favorite, easily, was "Empire Games" by Charles Stross, but "The Fireman" by Joe Hill was darn close.

As I've done the past couple years, most of my time was spent playing older games. "Games with Gold" has been an incredible source of value for me. I'd say over half my time has been playing games I got for free via the program. They're old, but still darn fun. As for new games, I'll focus on the two I've played most recently.

My favorite game of the year is Wolfenstein 2. I enjoyed the heck out of the first game - both for it's genre (alt-history is my favorite) and just for plain being fun, and the sequel more than lived up to it's predecessor. It has a great (if somewhat silly at times) story and was just as fun as the previous game. I loved the very small RPG aspects of it and everything about it was great. I can't believe I got it for only 25 dollars. That was a steal. I can see by the link on the left that it's not that cheap anymore, but I can definitely recommend it at full price.

Sigh. I enjoyed the last Battlefront, even though it had no single player, and even though I sucked at the MP. It was beautiful. Like, what I would think is perfect Star Wars MP. Well almost perfect. I felt like advancement was incredibly slow and after a while, I just gave up hope of ever reaching the top level. So when BF2 was announced with a single player (SP) story I was incredibly excited. Even better, it put you in the Empire, which I thought was even more exciting.

So yeah, I went into this game with really, really high hopes. And let's be clear, I love Star Wars, so you don't have to do a lot to make me happy if you've got a Star Wars license involved.

The SP story was... good. Not great, but good. This may be a spoiler, but the only thing that bugged me was the main character's eventual turn to the good side. I guess you should expect that (hence me not worrying too much about a spoiler warning), but I really wish she had stayed with the bad guys for the entire story. I think that could have been great. Overall though it is a great story and I love seeing even more of the post-RotJ timeline fleshed out. My biggest complaint though was how horrible some of the facial animations were. And then there's this: 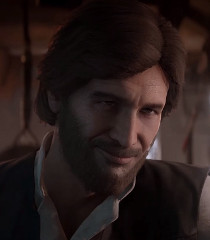 Yeah, ok, Solo got a beard, but damn does it just look wrong in game. All of the faces honestly felt a bit off to me. But I could get over that. Honestly, I could, if it weren't for the load times. Really, really bad load times. Hell, load times to freaking leave a match and go to the menu can take up to a minute. To load. The damn. Main menu. Lord forbid you accidentally do something wrong and end up waiting for crap to load. I did that once and simply rage quit instead. Here's an example. You go to play one of the arcade missions. You have 2 minutes to finish it. In such a session, it may take about 1.5 minutes to load the mission and then 1 minute to exit it. So you spend more time loading crap than playing. It's frustrating as hell.

I'm going to keep playing it for a little while and try to give it more time, but I am incredibly disappointed.

Oh, and apparently everyone in the world is mad about the loot crates. Screw that. If there were a loot crate bonus for speeding up the load times I'd be on that like crack.

So yeah, there was a new Star Wars movie a few weeks ago. The more time passes, the more I like it, but I've already written up my thoughts on this a few weeks ago. Instead, I want to talk about another movie - Atomic Blonde.

When the trailer came out, I thought it looked awesome. But when I watched the movie - it was one of the very few times when a movie far surpassed the trailer in terms of raw absolute kick ass-ness. (That's not really a word, but I'm going for it.) Great action (it makes the Bourne movies look boring), great soundtrack, and great performances, especially by Charlize Theron. James McAvoy was also pretty damn good, and that reminds me, if you have been avoiding his movies since they've been, well, crap, you need to watch Split. It singlehandedly makes you forget the trash that he's put out before. Pick up Atomic Blonde, and while you're at it, pick up the soundtrack as well.

Randomly, this was also the year I finally watched "Glengarry Glen Ross", and I wish I had not waited as long. When I fly for work, I watch movies. Mainly because I'm too big to work on my laptop, and also because I figure I'm going to be working near constantly when I'm on the road. So the 2-4 hours I have in the sky belong to me. I watch movies. I sometimes follow a theme. I watched all the Bond films a year or so ago and recently I've been trying to watch westerns and Anime (don't ask me why that combination). In 2018 I'm going to try to watch more classic movies I've missed.