A few days ago I blogged about the new Composer functionality for IBM Cloud Functions and OpenWhisk. This is a incredibly cool release and I'm going to try my best to demonstrate it over the next few weeks. In today's post I'm going to focus on what the process is like. By that I mean, how do I go from idea to actually using it and testing it. This won't be terribly different from the docs, but I figure it may still be helpful for folks to get an idea of how I'm using it. (And of course, I expect my usage to change over time.) Note that the code I'll be using for this post will be trivial to the max because I want to focus more on the process than the actual demo. Alright, with that out of the way, let's start.

As I said, the demo is pretty trivial, but let's cover it anyway so we have context for what's being built. The demo will convert a random Ferangi Rule of Acquisition into pig latin. So the logic is:

I'll start off by describing what the process would be prior to the introduction of Composer. To be clear, "old way" isn't meant to be disparaging in anyway. OpenWhisk has always let me build really cool shit and Composer just makes it even better.

First, I'll build the "select a random rule" action. Here is the code listing with the embedded very long list of rules removed. (You can see the full source code on GitHub - I'll share that link at the end.)

I created this as an action called safeToDelete/rule. (As a reminder, I use a package called "safeToDelete" to store actions I build for blog posts and the such that do not need to stay alive.)

I then tested to ensure it worked:

And the result is:

Next I created a Pig Latin rule, based on this repo from GitHub user montanaflynn:

I then pushed it up:

Alrighty. So to make the sequence, I have a problem. The output of the rule action is a variable named rule. The input for pig requires a parameter called input. In order to create a sequence, I'll need a "joiner" action. Here's the one I built:

Note that actually this does two things. It maps the input as well as modifying the text to remove the number in front of the rule. I pushed this to OpenWhisk like so:

Alright, so the final step is to create the sequence:

That's a long command but not too bad. Typically I'd make a shell/bat script so I could automate updating each individual rule and the sequence all in one quick call. I'll grab the URL like so:

To test that, just add .json to the end. You can see that here.

And finally, a sample result:

I'll be honest, that's plain unreadable, but who cares. Let's move on.

Building a Serverless Application - With Composer

Alright, so I'm assuming you've followed the install instructions already and can safely run fsh in your terminal.

The first thing you'll run into is that Composer uses slightly different terminology. Instead of sequences, you'll create an app. To be fair, it isn't a 100% one to one correlation, but I think for now it's ok to mentally map the two.

Next - you'll define your app in code, in a file. (You can use the graphical shell too but I don't.) So to start, I'll make a new file called - pigruleapp.js.

This file will contain the instructions that make up my composition. Here's what I started with:

Notice I don't define composer. I don't have to as the system will handle that for me. All I do is define my logic. In this case, I'm using the sequence feature of composer and defining what to run. Essentially I've defined the exact same sequence I used before. (I'm going to make that better in a moment.)

To create the app, I'll use:

If I have to make any edits, I'd use fsp app update instead. Next I'll test it with:

And - it works as expected:

Alright, but let's kick it up a notch. First, I can visualize my app like so:

Which gives me this: 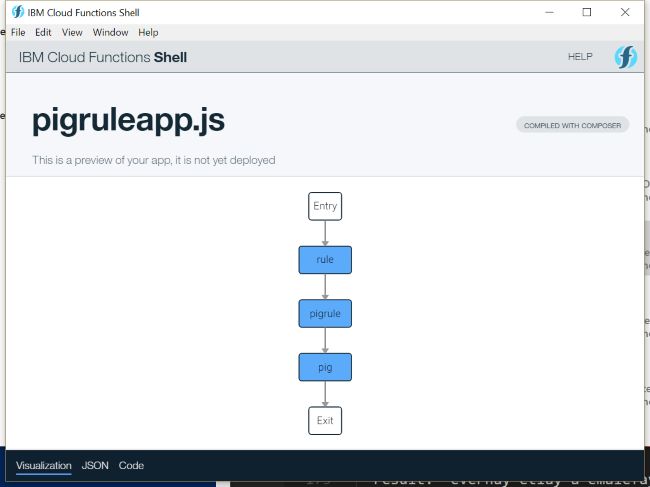 You can ignore the "not yet deployed" message on top. Basically the shell is letting you know you are viewing a local file and not a deployed app instance. So yes it is technically deployed. Anyway, what's not visible in the screen shot is that you can mouse over the blue boxes to get details. So for example, mousing over rule shows me action | safeToDelete\rule. You can also double click an item to see the source code. This is handy in case you forget: 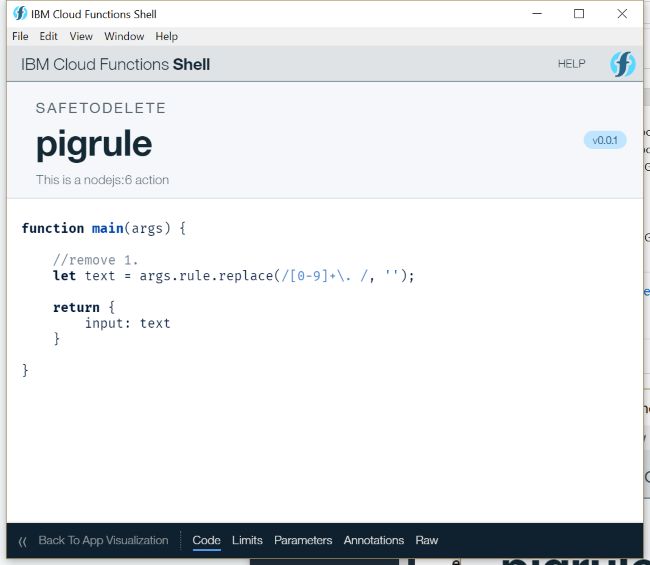 The JSON view is simply how Composer converts your code into JSON format. Here's what it did with my code:

And the Code view is simply my file.

Another change that may confuse you are sessions. Instead of an activation, invoking a Composer app creates a session. So you can use fsh session list to see your recent tests. Or my favorite, grab the last one with: fsh session get --last. 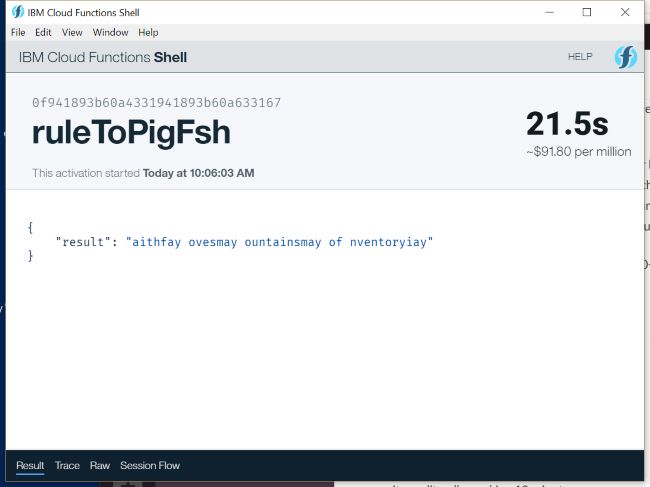 I freaking love this view. Do note though that the time for this test (21.5 seconds) was a fluke. There's still some performance tuning going on so this is absolutely not what you would expect normally. The details here are awesome and so easily readable. Here's the trace: 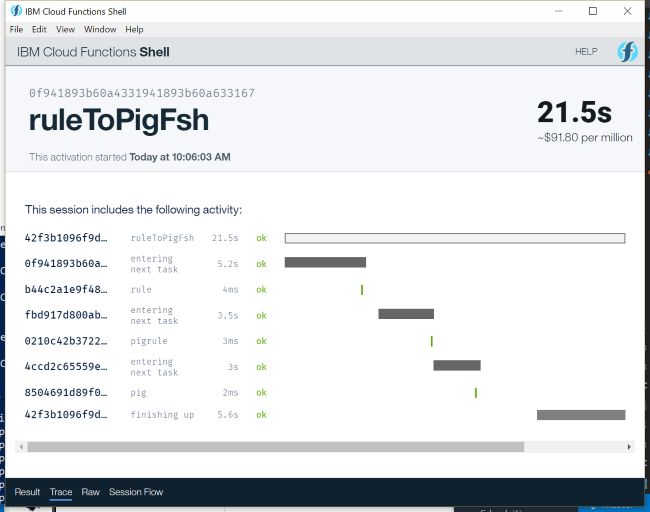 I love how I can see the timings of every step. I'll remind you again - the totals here are a fluke, not the norm, but you can really see how handy this would be to identify the "pain points" of your applications.

The raw tab looks a lot like an activation report:

Session Flow is where things get even more interesting. It's basically the same flow chart as you saw in the preview above, but check out what you get on mouse over: 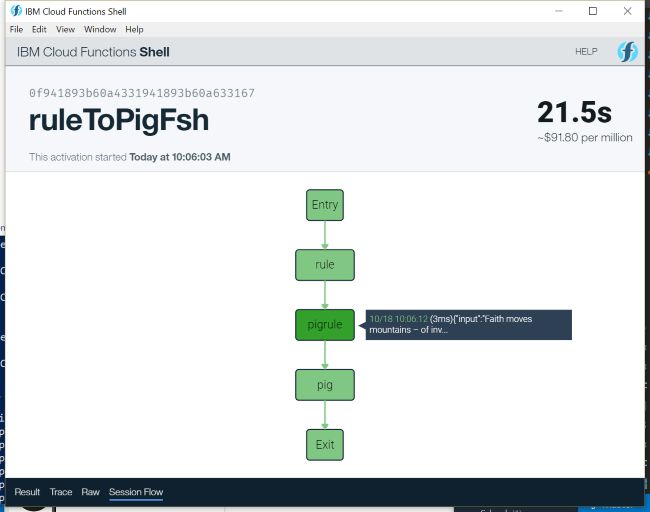 In case it is a bit hard to read, you are seeing the output of the action. So this gives you the ability to trace the flow of data and help debug where things could have gone wrong. Also note you can click the green bubble for a more clear result. For example, if I clicked the green "rule" box I can see the output from the first item in the sequence: 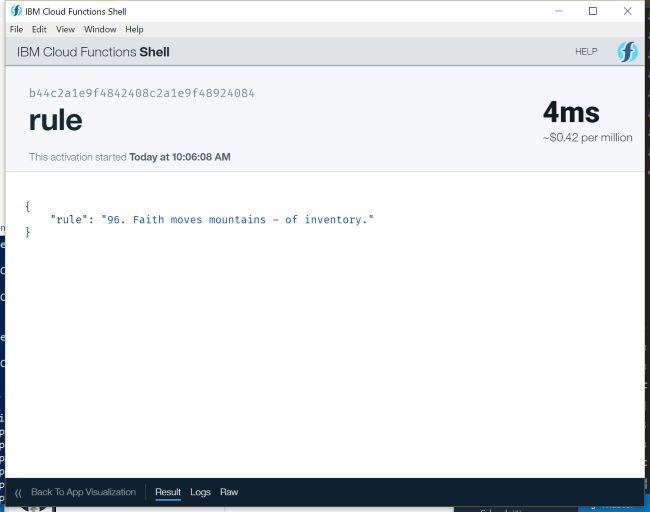 It's a bit hard to demonstrate in still pictures, but the thing is - I can really dig into my invocation and see how things worked. This was all possible before, of course, but was definitely much more manual. 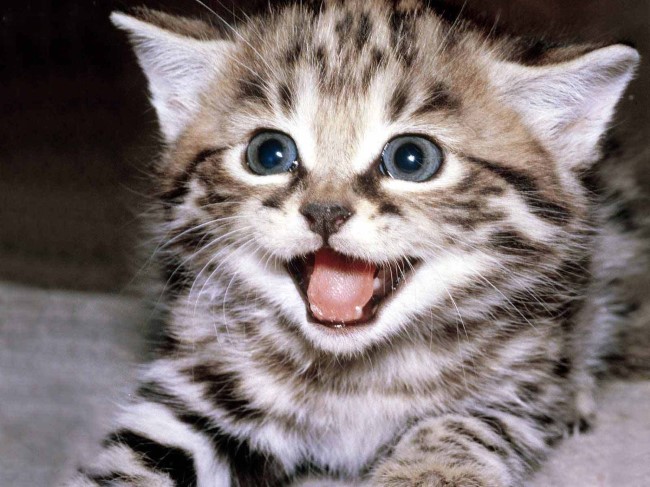 Let's really improve things though by getting rid of that simple "joiner" action. This is the new app I built (called pigruleapp2.js):

All I've done is replace that middle action with an inline function. I then pushed it up like so:

When invoked, it runs the exact same, but now my setup is one action smaller, which is a good thing in my opinion.

In case your curious, this is how the preview changes: 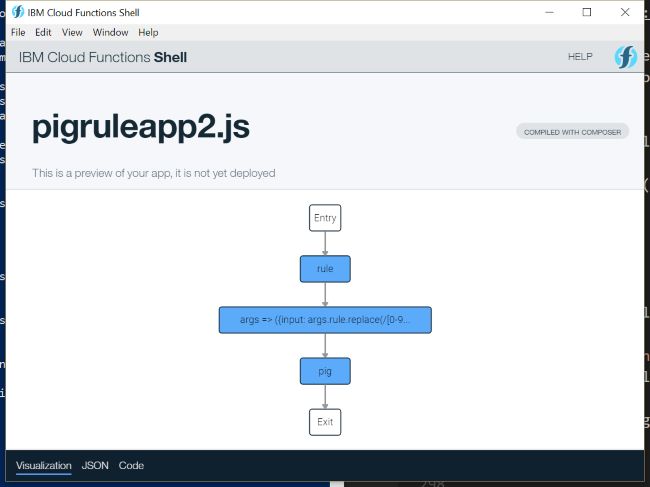 One last note. The CLI currently does not tell you how to get the URL for your app. That's been logged as an issue. You can do so with the webbify command:

Which spits out the URL: https://openwhisk.ng.bluemix.net/api/v1/web/rcamden@us.ibm.com_My%20Space/default/ruleToPigFsh2.json

And you can click that link to test it yourself.

So I hope this made sense, and if not, just leave me a comment below. I'll remind folks that the fsh CLI does not currently work in WSL (Windows Subsystem for Linux) so if you are Windows, switch to Powershell when using it. You can find the source code used for this demo here: https://github.com/cfjedimaster/Serverless-Examples/tree/master/fshruledemo

Thanks, very nice! Maybe worth mentioning that the "rules" are not related to OpenWhisk's rules.

You mean the Ferangi rules?

Yes. The term "rule" appears many times, and given that this is an OpenWhisk article, it might be good making sure people are not confused..

Oh heh - well - I think the comments here will be enough - and the first mention of rule mentions Ferangi first. :)

Note with wsk -r you can drop -b. Also fsh webbify now reports the url. Thanks for reporting that.

I saw that -r did -b a while ago but muscle memory is hard to kill. ;)