A quick tip that is 100% thanks to the Visual Studio Code twitter account. For a while now I've been able to run Visual Studio Code from WSL (Windows Subsystem for Linux) by simply doing code . in the directory I'm working in. However, a few months ago I switched to the Insiders build. I was hesitant to do so as it seemed like it would be risky, but after one of Microsoft's engineers assured me it was safe I gave it a try.

I think in the last few months I've seen one case where a bug was introduced that forced me back to the "regular" Code for a few days. Outside of that I've enjoyed getting the new features earlier and it is now my primary editor. (And to be clear, you can absolutely have both installed, and running, at the same time.)

However, I noticed recently I wasn't able to run the Insiders editor from within WSL. I could still run code, but nothing worked for the Insiders build. After asking about this on Twitter, I got this:

You probably need to add the \bin path to your .bash_rc or PATH

Duh. I did a quick echo $PATH and saw that Code's path was available, but not Insiders. I hadn't even noticed it, but WSL automatically includes your Windows PATH setting into the Bash shell, so to fix this, I simply added it there. Another nice surprise (one I found a few months ago), is that Windows made editing your path a heck of a lot easier. 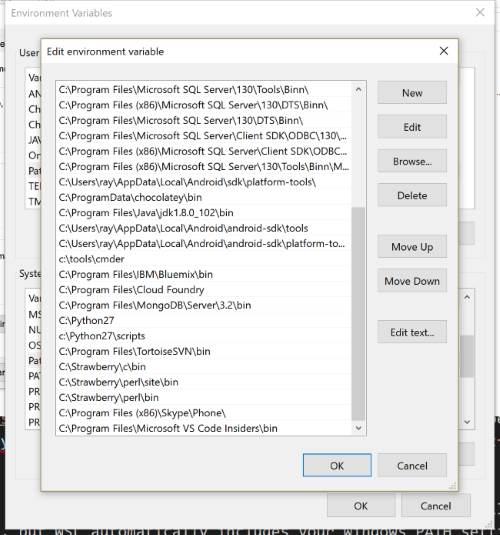 So - I added it - fired up a new Ubuntu shell - and bam, I could run code-insiders . and it worked right away. Note that if you do this under a Ubuntu directory, Insiders won't be able to view the files. But if you open it open /mnt/c (or lower) then Insiders correctly loads the proper Windows directory. I'll probably also make an alias so I can type fewer characters. I have a confession to make though. As much as I love using WSL I'm still very much new to Bash stuff.