I'm currently at the tail end of my first Microsoft Build conference and had the chance to spend time with the HoloLens. I thought I'd share what it was like to use it in person since the videos don't really do it justice. I've also had the chance to get hands on the new Surface Laptop and I'll talk about that at the very end.

I want to begin with a bit of context about what exactly the HoloLens is. HoloLens is augmented reality, not virtual reality. Microsoft refers to this as "mixed reality", but I figure mot people have heard of AR and can understand that better. If you don't know what that means, the difference is that instead of a virtual environment that surrounds you completely (VR), AR adds items to the reality around you. When wearing the HoloLens device, you can still see everything around you in the real world world, but the hardware will 'draw' various things on it to augment what you see.

Speaking of the hardware, it's pretty slick, but definitely a 'process' to put on. The first time I used it I had trouble setting iot up right, but by the second and third demo it was pretty trivial. It isn't heavy, and it works with glasses, but it did feel a bit heavy on the frame of my glasses. The key thing to remember is that the hardware actually contains everything. You aren't tethered to a machine for it to work correctly. You can walk around and interact without having a cable tripping you up.

The next thing you discover - rather quickly - is that the area where the AR works is a small window of your total view. Essentially - look forward, and imagine a rectangle on the right hand side. This box is where the virtual stuff will be displayed. This sounds limiting, and sometimes it is, but it really comes down to the use-case/demo you're participating in. In some cases it was pretty obvious, and in others it wasn't noticable at all.

And it's the demos where I quickly got a feel for where HoloLens worked really where, and also where it simply just didn't make sense. The first demo, a Mars exploration, was really cool, but in the end, didn't really work as a great example of the hardware. Imagine being in a room, and as you look around, you'll see the surface of Mars. It is impressive, but really more suited for a more full experience with VR. I'm guessing Microsoft starts with that as the later demos or a bit more serious, but honestly, it wasn't even close to the best thing I saw.

It was the later demos where things really began to click. There were multiple examples of "product configurators" that I think we're great. So for example, configuraring a car, seeing it in 3D sitting on a table, and then having a full size version to look at. That was impressive. On paper, it sounds boring compared to Mars, but in practical usage, it worked really well. A later example used a motocycle that was modified in various forms. The AR displayed the changes over the 'shell' of a bike and again, I really thought it was great.

Another demo involved construction. First, it showed taking plans off a screen and throwing it on a table. This worked well for giving me feedback on how the plans would work in real life. Basically imagine being able to build a model from 3d plans instantly. And even better, you could adjust the 3d model and it applied back to the original plans. Cool, but it got better. The demo then actually 'blows up' the plans around us to demonstrate how a particular door isn't going to work due to a load bearing girder. The demo than shows a proposed alternate placement for the door. Again, all of this sounds rather dry, but imagining this out in the real world it's going to work really freaking well. Oh - and in that same demo, I could "look" at a wall and see the stuff inside the wall. Neat!

But there was one demo that truly sold me on this as a product. I have an unnatural fear of being electrocuted by wiring. I know it isn't that big of a deal, but I absolutely hate even the thought of doing minor home repairs that involve electricity. Hell, I get a bit nervous if I have to plug something in and my hand strays near the metal plugs. There's no real good reason for this, it just makes me nervous.

One of the demos involves Skype integration, and basically it begins as a video call in the HoloLens. That's actually kinda cool by itself. But the real demo involes replacing an electrical switch. Probably a pretty trivial job, and it was completely fake in terms of 'real' wiring, but I was definitely nervous when I began. Here's where it gets cool. My partner on Skype had me look at my tools and was able to actually draw an arrow to what I needed to use first. When I picked up the voltmeter, she told me how to use it. She then walked me through attaching the switch, again using arrows, lines, etc, to clearly tell me what to do. On her side, she could see everything I did to help direct me and keep me from killing myself. (Ok, yes, I know it wasn't really dangerous, but like I said, I was scared. ;) At the end, I had the switch attached and could test it.

And I tell ya... it was an amazing experience. Here is something I was scared to do and I actually enjoyed doing it. I felt really proud of myself at the end! Here's a promotional video that pretty much matches what I went through.

Unfortunately, I wasn't able to play any games with the device so I can't comment on how well it works in that space, but for practical, industrial/commercial type stuff, I think it's going to be amazing. For consumers, we will have to wait and see. (As it stands, there isn't a "consumer" version of the hardware yet, just a developer kit which isn't exactly cheap.)

Finally, what about that new Surface Laptop? They had a few models here at Build and I spent maybe 5 minutes with it. First and foremost, once again the "feel" of the hardware needs to be experienced. I had the same reaction with the Surface Book. Actually touching one gives you a real impression of how nice the hardware is. The same applies for the Laptop. The material (named "Signature Alcantara" which frankly is a bit pretentious) feels like something I'd love rest my palms on for a day of work. It feels like no other laptop I've held before. The screen is beautiful, but I honestly can't say if it is nicer than the Book. But again, the Book has an incredible display, so I'm not really interested in improvements there. The size of the display though is incredibly thin. I pulled out my Book and compared thickness, and I'd say the Laptop is about half as thick. It doesn't detach, which to me is a bonus. I haven't used that feature of my Book since the first week I had it. Also, the keyboard feels nice, maybe a bit nicer than the Book, but obviously that's subjective. 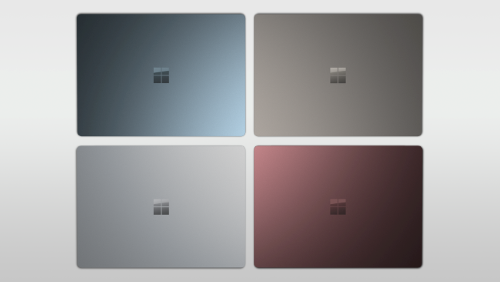 All in all, it is an incredibly nice looking machine that actually feels nice to touch as well. The only real bummer about the hardware is that the high end model only comes in one color. I wish all four colors were available in the i7.

That's it for now. I'm going to write up my thoughts on Build either tomorrow or early next week.

Might actually return to M$ once it is time to retire my MBP as long as the WSL is pretty solid. It is looking like a contender...

I'd call it solid now (actually, about to hear a presentation on it at Build). The biggest issue, for me anyway, was that any tool that listened for file changes didn't work. That was fixed in the Creators Update.