I don't really do a lot of ColdFusion work anymore, mainly just support for clients as my side gig, but when I do think of the platform as a whole, there's two companies that always come to mind - Ortus and Integral. I blogged about Ortus, and specifically CommandBox, a few months ago, but today I want to share my impressions about the latest FusionReactor.

FusionReactor (who, by the way, help sponsor this blog!) has been around for a long time now. At a high level, their product provides server monitoring and metrics for your ColdFusion server. Adobe released something similar built into the product itself, but let it wither on the vine so to speak. (Last time I checked it was still shipping as a Flex and AIR app which tells you how much attention it's gotten in the past decade.)

The last time I played with FR, which was probably a good five years ago, I remember it worked well, but was a bit difficult to setup. Once you got past all that, it worked fine, wonderfully actually, but the setup was definitely work.

The current version is light years away from that. Right off the bat, the setup process was much simpler. The web-based administrator includes a scanner that can automatically find and help you setup instances for both Adobe ColdFusion and Lucee. 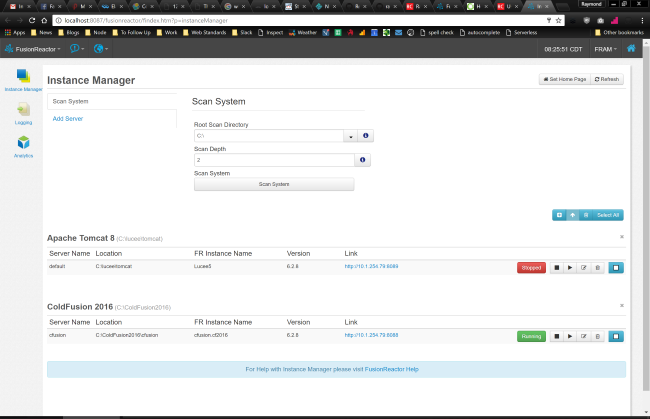 In the shot above, you can see my local Adobe CF server as well as my local Lucee install.

Each instance manager links to a dashboard for the individual server. Inside that you have an incredible amount of detail. The initial dashboard gives you a good high level look at your server. Mine isn't necessarily showing a real-life example as my local Lucee server just has a few files. 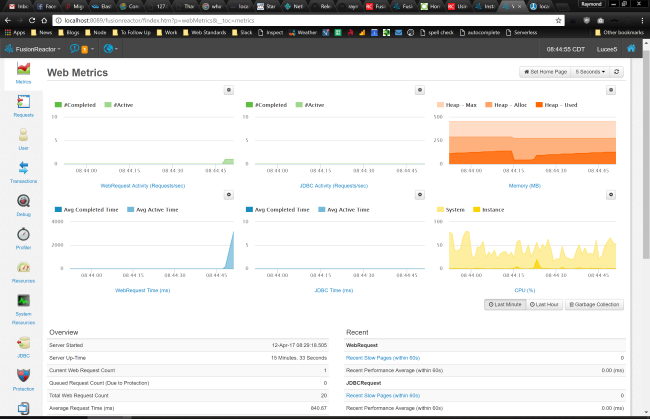 I won't go into detail on all the various features, but at a high level, you've got:

So again, I don't really have a lot I can show from my personal server, but I did some quick tests with some intentionally slow code. (Just by adding sleep()!) Here is a dedicated "Slow" report:

The details you get are so deep it's almost stupid - here is just one tab for that request: 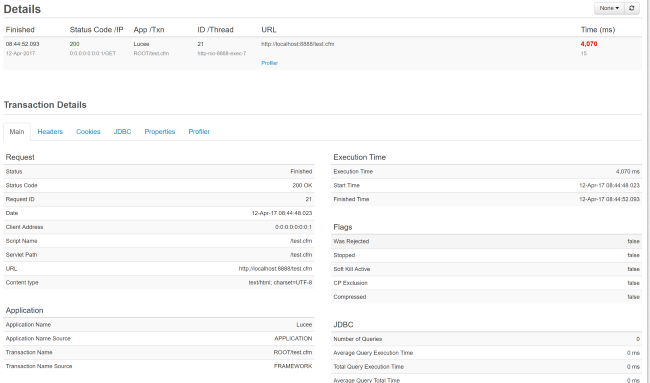 Going into the profiler reports details about the slow aspect. This is one part where a ColdFusion developer may have some issue as the details refer to the Java code and not the CFML. In this case it's a bit obvious that the culprit is the sleep method as it has the exact same name as the CFML function. I tried a slightly more complex example where my CFM called two functions in a CFC. One of which had the sleep call. Looking at the CFM request, in the profile, I can still see it's a Java sleep call making things bad, but I can't necessarily see that it was the call to the CFC that initiated it.

So - speaking of slow bits - the old advice that you're slowest parts are probably the database is still good advice. One of the most cumbersome things I remember about the old FusionReactor was setting up database monitoring. You had to copy over a JAR, modify the datasource, and more if I remember right. Now - it just works. Automatically. And as with the rest of the dashboard, you get a crap ton of data. Again, here is just part of the detail for one database request. 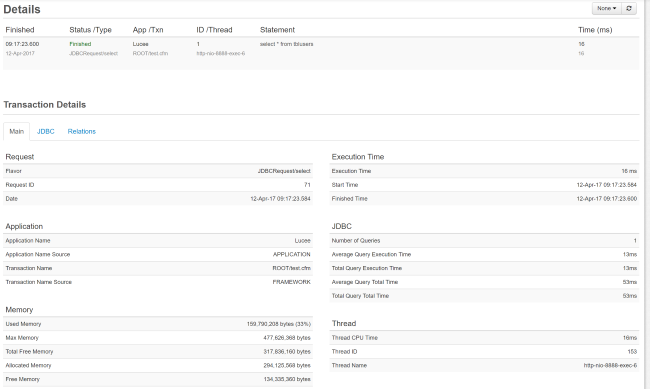 Along with detailing a request, you also get a dashboard into requests running on the server in real time too. You can quickly see the slowest queries too. Finally, if you use bound parameters in your SQL (which, of course, you are, right?), FusionReactor will automatically show them in the SQL report. So given this:

FusionReactor reports it as:

All in all, FusionReactor started off pretty darn good and has advanced light years since it's release. Pricing is per month (or by the year) and ranges from 39 to 79 per month. Based on what I see, this seems more than fair, and actually cheap. And heck, if the money is too much, then this may be a perfect opportunity to consider moving to the free Lucee server instead of paying for Adobe ColdFusion. Also be sure to note that FusionReactor is for all Java servers, not just CFML servers. I whole-heartedly recommend this and encourage folks to check it out!

I went to an Adobe CF event in Feb and they said they're doing a complete rebuild of Server Monitor in the next release (2018), but it is still for enterprise licenses only and standard users will not be able to buy it separately.

8.5k, plus roughly another year of wait time before rollout is even possible. Thanks for the head's up!

Do you know how the latest version stack up with New Relic?

My experience w/ NR is just with their Node and web site products, not Java/back end.

What is "the free Lucee server"? I run Lucee on a VPS, but it's costing me about $50/month.

Err, do I really need to answer that? Every free app server (PHP, Ruby, etc) will cost $$ for hosting.

It's worth noting that FR has a new developer's license which is only $199 with the limitation that you can't run it on production.
http://bit.ly/1JfEJKn

I've heard the same news about Adobe's server monitor and I'm curious to see what they'll do, but in the meantime I use FR for local dev.

So is that price *not* monthly then?

You can read more about our Developer edition here: https://www.fusion-reactor....