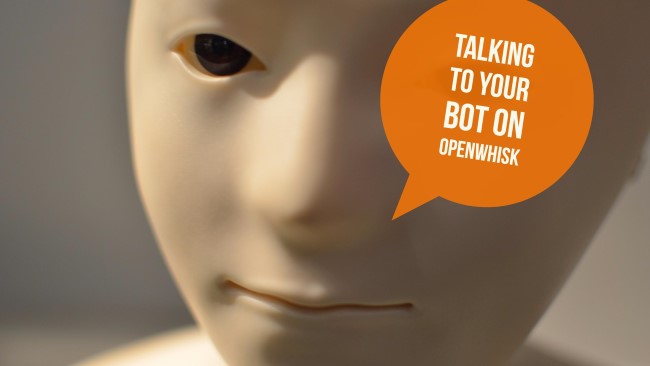 As I continue my look into serverless with OpenWhisk, today I thought I'd build a quick demo around an incredibly cool bot service I discovered a while ago called Pandorabots. I first played with their service last summer, and I thought it was cool as hell, but I never got around to actually writing up my experience with it. My original exploration of it was via ColdFusion, but I thought this would be a great example of something I could build even easier (and a heck of a lot quicker) in OpenWhisk.

Pandorabots provides what it calls "AIaaS", "AI as a Service". Basically what this boils down to is the ability to process natural language input and handle responding intelligently based on rules you create. Their actual service is pretty simple. You've got APIs to upload scripts for your bots and APIs to 'speak' to your bot, the real complexity comes in at the AI level.

There is no way I can adequately explain the full power of their bot service, so instead I'll give you some high level points to describe what you can do.

As I said - the logic of your bot can get really complex. Pandorabots provides a "playground" if you want to try it out. I also suggest looking at the Quick Start and then checking out the tutorial. Unfortunately the tutorial is a large slide deck, not a proper 'document', but it's pretty verbose and has lots of great examples. If your curious how the logic scripts look, here is one sample:

Yep, XML-based, but there's nothing wrong with that, right?

So as I said, the AI portion is pretty darn complex, but the API side is incredibly trivial. You can manage your bots via a REST interface, but since they have a CLI too, I'd probably just use that during initial testing. The CLI lets you chat with your bot too and is great for configuring the logic. The API I'll use in this demo is the Talk endpoint. It lets you have a conversation with a bot you've setup. I've used a sample robot they provide on GitHub called Rosie. It's got a deep set of conversation files so I don't have to worry about writing that myself. I named my Allura though. (Bonus points if you get the reference without clicking the link.)

The Talk endpoint simply has me hitting: https://aiaas.pandorabots.com/talk/APP_ID/BOTNAME?user_key=USER_KEY&input=INPUT. You can also append a sessionid value that represents a talk 'session'. When you send data to the bot, it returns a sessionid value automatically, but you need to pick that up and send it back.

I said it was simple, right? All I do is pass my various keys, the input, and a session value if it was passed in. Here's an example of me running the action locally:

The next step then is to add a REST interface to this action:

And I'm good to go! First, let's try talking to it with no input:

Woot! It works. Than let's try something sassy, like, "My milkshake is better than yours":

What the you know what. I wasn't expecting that. Remember, I used a default bot that had logic already. Apparently it recognized the input. So yeah, let's follow up with this:

I think I love this bot. Honestly.

And that's it! Of course I could build the front end, and I will if people ask, but Pandorabots only has a free tier for ten days, so I'm taking down the REST endpoint now and setting a calendar reminder to close down my account. <rant>Which, btw, I think kinda sucks. I mean I totally understand charging for a service, especially a cool service like this, but I hate that I can't simply 'fall back' to a restricted account. I've got to actually close my account which means if I want to play with this more in a month's time, I've got to sign up. Again. And close my account. Again.</rant>