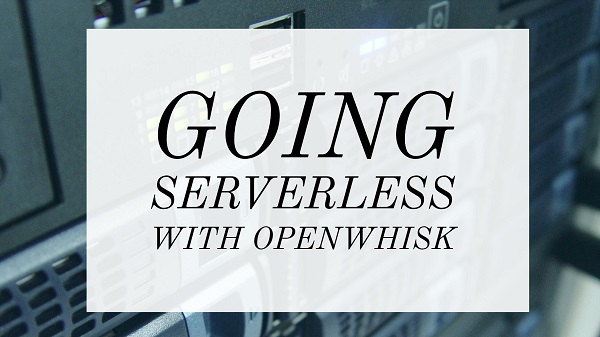 Like I assume most of you have, I've been hearing a lot about "serverless" recently and while I had a passing understanding of what it was, I had not actually spent any time playing around with it. This week I got a chance to play with OpenWhisk, IBM's open source offering in this area and I have to say I'm pretty blown away by how cool it is. What follows is a brief explanation of what serverless means to me, why I think it is something to check out, and, of course, some sample code as well. Please remember that I am incredibly new to this space. What I write may be completely wrong, so take with a grain of salt. And as always, I highly encourage folks to chime in with their own thoughts, corrections, and questions.

First off - what the hell is it? I mean, everything runs on a server, so the name doesn't make sense, right? I agree. I hate the name. "The Cloud" isn't necessarily accurate either, but "Serverless" feels like the complete opposite of the truth as opposed to a fluffy (get it) marketing term like the cloud. That being said, you can think of it like this.

A typical web site, or app, or API, will run on a server. This is built in some app server tech like PHP, ColdFusion, or Node. In this code, you'll do something to set up how the data is accessed ("A GET request to path so and so will execute this code") and then obviously write the code to actually do what the request is meant to do.

That's fairly simple, but of course, there's a lot going on behind the scenes. That very first line which loads in Express is doing a lot behind the scenes. I don't necessarily have to worry about it, and this is why Express was my gateway drug to Node, but it's still there of course. Also, the actual setup of running a server and specifying the route isn't much work either - just a few lines. But here's where serverless can make things more interesting. Imagine if my code was just this:

That's hella simple, right? Of course, I need some infrastructure to specify "On /cats, do this", but that's where the serverless platform comes into play.

It reminds me a lot of switching to static site generators. You may end up with similar complexity, but where that complexity lies has moved from code to the platform I'm using to host my code. If I can trust IBM, or Amazon, or Microsoft, to be able to handle HTTP routing (and I'm pretty sure I can), then I can focus on just my implementation, which has become smaller and simpler, which is pretty much always a good thing.

That's my take, the more formal, intelligent answer can be found on the OpenWhisk site: What is Serverless Computing Here is the part I think makes the most sense:

Serverless computing refers to a model where the existence of servers is simply hidden from developers. I.e. that even though servers still exist developers are relieved from the need to care about their operation. They are relieved from the need to worry about low-level infrastructural and operational details such as scalability, high-availability, infrastructure-security, and so forth. 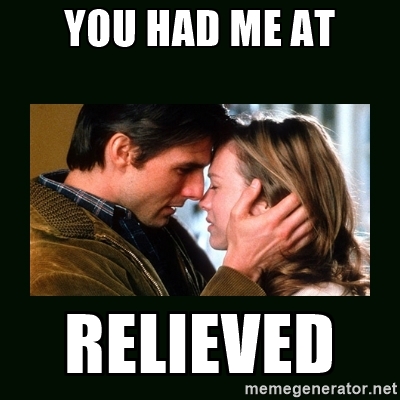 The OpenWhisk site goes into more detail, but again, here's my take:

And most recently - a new feature is an API gateway to all of the above. This is still in beta, but it lets you define an API path that points to my action.

To start using OpenWhisk, you'll want to download and install the CLI. You can then start playing. Now let's say you want to build an action. I'll use JavaScript because it is perfect and has no oddities at all. (OpenWhisk also supports Python, Swift, and even Java.)

You need to have a main() function and you have to return an object containing a payload key. I can then upload this like so:

In the line above, wsk is the CLI and action create is what you are doing. The next arg, cat, is the name of the action and cat.js is the file to use. This will deploy the file. You can then run it like so:

The --blocking part simply tells the CLI to wait for a response. You do not need to do that if you don't want to. (And you can still get the response later.) 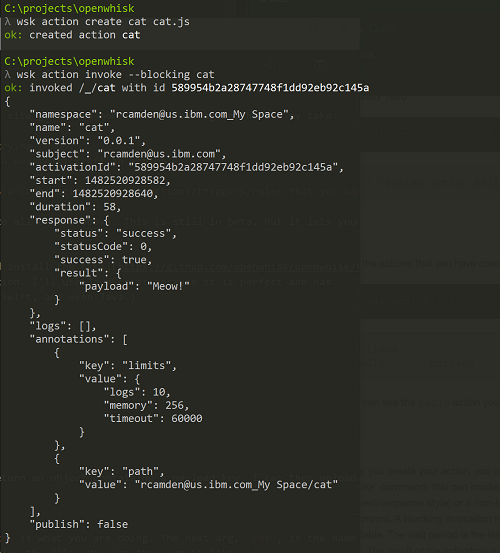 The last bit, exposing it via a REST API, is done like so:

In the call above, /blogapi is a root path and /meow is the path for this specific call. get is the HTTP method and cat is the action. The result is a URL: 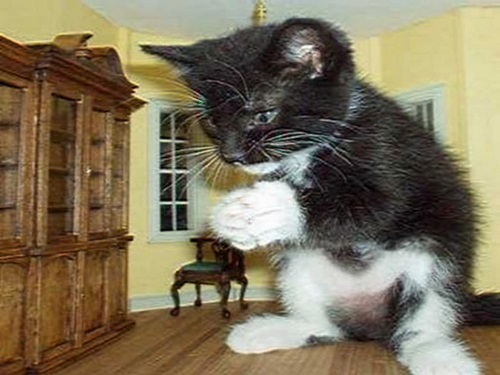 Actions can get more complex, and obviously take arguments. You can also import packages to add more functionality. (I'll be linking to docs about all this at the end.) One of the coolest packages is the Cloudant one. How easy was it to use?

That was cool, but I wanted to know if I could bypass some of those arguments. You can specify parameters for a package at a global level, and dbname would make sense for that, but I didn't want the include_docs to be global for everything. I got some great help from fellow IBMer James Thomas and he pointed out that I could include the OpenWhisk code itself in my action. So consider this action I built:

I begin by getting the openwhisk package which lets me do the same stuff the CLI was doing. (Note that I was told that the api_key should have been picked up by an environment variable so that may not be necesary.) I then simply call my action with params. What's cool is that I can then massage the response a bit. I then set up a new API route for this here:

Now I can use this in a mobile app and not worry about the server itself. I freaking love this. No Node.js server to configure with memory and the like, which, admittedly, is easy, but the less I have to worry about the happier I am. I could integrate this into an Ionic app fairly simply since it's just REST.

Obviously there's a lot more to learn, but I'm pretty excited about this. To be clear, just like static sites don't make sense for everyone, I don't think serverless makes sense for everyone (every project) either. But it does provide an incredibly compelling path to simplifying your deployment and that makes it something to check out.

Here are some resources to get you started.