Unless you've been living under a rock the past few months, you've probably heard that a new Star Wars film was released this past week, "Rogue One." Like "The Force Awakens", I've been looking forward to this for quite some time. Obviously what follows will be my heavily biased review - I'm a huge Star Wars fan and don't have the most critical eye when it comes to the subject matter, but if you want to know what I thought, read on. I will add a very large and obvious "Spoiler Break" after I share my thoughts, so stop reading at that point if you don't want important details ruined for you. I will also consider the comments to be a spoiler zone as well. Basically - just stop reading at the spoiler break!

Going into this movie, I had only one concern. As the first non-trilogy movie (that's not exactly right, Clone Wars was the first one), there was a lot riding on it. I really believed that this was a good idea. Like the books, TV shows, etc, let's explore what's happening outside the main big story and flesh out the universe. Right from the beginning though there were concerns. A sizable portion of the people I spoke to about the movie were confused by when it actually took place. Normally that's a pretty bad sign. I think most people eventually got what was going on, but audience confusion is never a good sign.

Right from the beginning, this is a completely unique film. Everything, from the title text, to how things are shot, are completely new to the SW series. Even though "The Force Awakens" (TFA) was set past the events of the last trilogy and had a lot of new stuff in it, I really thought R1 was more unique. It felt like seeing a completely new side to the classic story.

What comes to mind is "Enterprise". Yes, I know, talking about "Star Trek" in a "Star Wars" movie review is probably breaking some Internet law, and I know most folks didn't like "Enterprise", but just go with me here a minute. One of the best aspects of "Enterprise" to me were the details it revealed about the early years of Starfleet. Specifically, I thought the Vulcans, and how they treated Earth, was absolutely fascinating. To me, seeing that 'texture' to the history made the show worthwhile to me, despite it's other flaws.

R1 does much of the same. We are presented with a Rebel Alliance that is much more fascinating then we've seen in the past. It isn't uniformly pure and good. There is infighting. It's all a much more realistic and interesting than previously seen.

This is a much darker film than we've seen previously. "Empire Strikes Back" (ESB) has a pretty dark tone, but I'd say R1 far surpasses it. That could be a bad thing. "Batman vs Superman" was incredibly grim, but ended up feeling completely stupid and unnecessary. In R1, it feels entirely appropriate for the story. The Empire is at its strongest and there is a desperation to the movie that makes sense for that universe.

The main cast was well done, especially Felicity Jones' Jyn Erso. Like most ensemble films though you don't get a deep look at many of the characters. I'm ok with that as - again - it is an ensemble film, but I really feel like the Imperial pilot defector got shafted. Maybe they were worried about spending too much time on a defector when we had one as a primary character in TFA as well, but I truly felt like Bodhi Rook (and yes, I had to look it up) had a much more interesting story to tell.

Krennic and Galen were well done, but I strongly recommend reading Catalyst to get a much deeper look at their relationship. In fact, I'd say that my overall enjoyment of the film was greatly enhanced by reading the book first. It really gives you insight into their characters.

The use of CGI for two characters (I won't name them yet as it would be spoilers) was... an interesting choice. The uncanny valley issue is strong here and I'm not sure I would have made the same choice. When it was done in "Tron Legacy", it made sense to me. In the real world, Flynn's youthful face was used sparingly, and it wasn't too jarring. In the computer world, his CGI face made perfect sense.

Lastly, the music was uninspiring, just like it was in TFA too. That's truly sad. It doesn't ruin the movie for me, not even close, it's just disappointing. I bought the TFA soundtrack and played it once or twice, but there's nothing memorable in either's soundtrack in my opinion.

It sounds like I'm complaining a lot, but to be clear, I loved it. A coworker asked me how I would rank this film, and honestly, I feel like I can't. Every aspect of it seems to different from the 7 main story films it doesn't quite 'sit' right in a simple ranking. I would say it is much better than any of the prequels (which, to be clear, I didn't hate per se, but...) and I would say it has the coolest sequence of any Star Wars film I've ever seen. (Not that it matters, but after the spoiler break I'll share my thoughts on the coolest moments in SW history. ;)

I definitely recommend seeing this in the theater. It really deserves a big screen viewing.

Finally, I want to share a few tweets from Kumail Nanjiani, star of HBO's "Silicon Valley" - he pointed out how diverse the cast was, something I had noticed, but not really noticed like he did:

I strangely started tearing up. And I'm a grown man. I thought of kids watching this movie & seeing ppl that look like them kicking ass.

Didn't think about structure once during Rogue. The fight in Jedha struck me. Ppl who looked like me & dressed like my ppl were good guys!

Those embeds aren't necessarily in the proper order (thanks Twitter for making embeds weird), but you get the point. I remember when I took my eldest son (he was born in South Korea) to the Star Trek reboot, he got incredibly excited when Sulu had his kicking ass scene.

Anyway - you get the idea - go see it - enjoy it - this isn't the most intelligent film of the year but it's good fun and an awesome addition to the world of Star Wars! 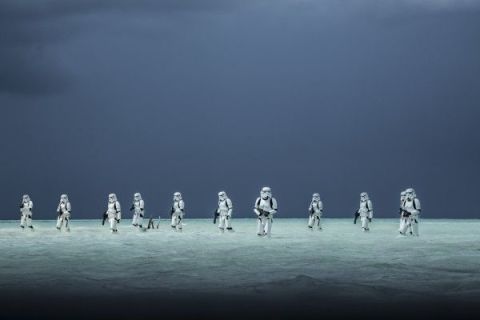 Some random spoiler-ific items in no particular order.

Have to disagree with you. CGI Leia was the one that looked out of place to me. I think its because Tarkin's scenes were in low light rooms while Leia was all bright (felt like watching the Polar Express).

Interesting - yeah the lighting did make things different. I think for me the whole emotional aspect of the Leia scene also made me more forgiving.

I agree watching Vader be Vader was awesome. Makes me want a full movie of that to fully explore what he can do. I would not have done the CGI actors - I'd have gone with recasting Tarkin and just showing Leia's profile instead of her face to get the point across.