I want to talk a bit about "The Flash", but before I do so, let me talk about something completely different - "Green Lantern". I'm talking about the 2011 movie with Ryan Renolds. Yes - that one... 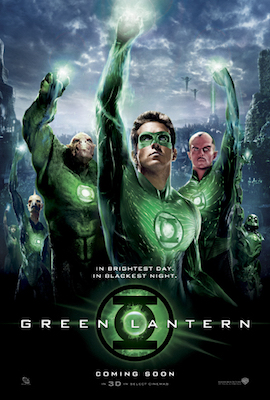 Pretty much everyone disliked the movie, but I enjoyed it. And the primary reason I enjoyed it is that it felt like the first (in a while anyway) comic book movie that actually felt like a comic book. Now don't get me wrong - Marvel has been kicking ass for a while now and their movies are incredible. But they are also pretty realistic (ignoring the whole giant floating aircraft carrier thing). I can remember sitting in the theater and when GL started, it was all outer space and freaky aliens and it felt like I was watching a comic book. I didn't get that feeling from the Marvel movies. (Since then, of course, we've gotten "Guardians of the Galaxy" which is pretty much in the same vein I think.)

So it's in that context that I want to show what is - to me - what of the shining moments of "The Flash": 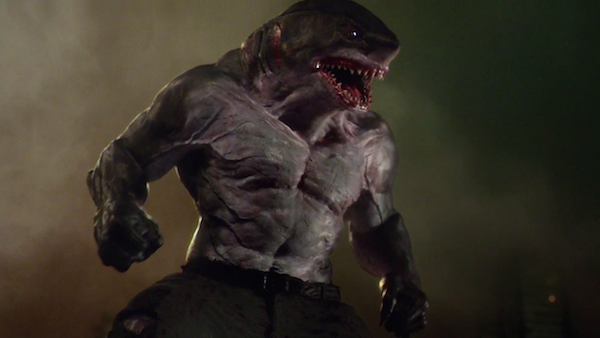 Yes. That's a giant man shark. Here's another pic to give you scale. 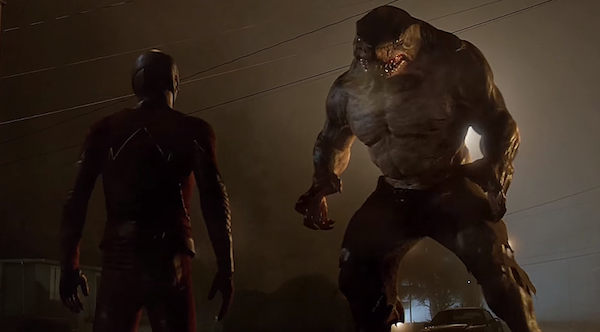 When I first saw this on screen, I laughed out loud. It was so over the top. So stupid. So ridiculous. Yet so incredibly fun. I loved it. I mean, I just loved it. 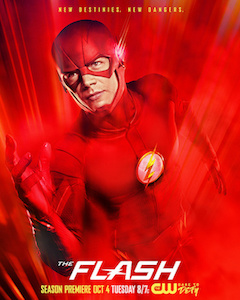 I started watching "The Flash" about a month ago. In some regards, it's typical light-weight TV superhero stuff. You've got a young cast of unusually good looking people. You've got a "monster of the week" type thing much like the old "Smallville". As I said, it's light.

But on the other hand, you've got story arcs that extend over multiple episodes. You've got things brought up from much earlier in the season that rewards dedicated viewers. And like shown above, you've got villains who aren't ashamed to be a bit over the top. A bit... comic-booky... and I can appreciate that.

Maybe it's a reaction from how much I disliked "Batman vs Superman". I found myself liking "Supergirl" more after seeing it too. I just found myself having fun watching a show that didn't seem to be afraid to laugh a little and actually have fun. I feel like this could be something DC could run with. Let Marvel be the more 'serious' comic book movie company and instead go for a more silly, over the top vibe. "Suicide Squad" was enjoyable (and again, I'm in the minority of people who liked it), but it had moments of ridiculousness that really lightened things up. I don't really have much faith they can do so - although I will go see "Justice League" and "Wonder Woman" with some hope of getting a decent film.

To be clear, "The Flash" can get dark too. But it doesn't feel cheap, or gratuitous, like "Batman vs Superman" did. Maybe it's not fair since "The Flash" had hours to get me to care about it's characters, but in the end, it was DC's choice to rush to pitting two of it's favorite characters against it each other. I think "Batman vs Superman" could have worked, in a few years, much like how Marvel's "Civil War" only worked because we've had enough time to really grow to know Iron Man and Captain America and understand why they could be in conflict.

Another aspect that really made me fall for the sure was the use of adoption. The main character (Barry Allen) is taken in by a police officer who raises him as a son. The show kind of steps around the issue of whether or not it was a formal adoption or just foster, but that doesn't matter. Barry considers himself to have two fathers and is proud to say so. (As an aside, it occurs to me there's multiple examples of this in DC. Superman, of course, is another one. And Bruce Wayne was raised by Alfred after his parent's death.)

"The Flash" just began it's third season and you can watch the first two seasons on Netflix now. In the end, I think the greatest praise I can give it is analogous to how Marvel has succeeded. Before "Iron Man", I didn't really care about the character. After the movie came out, I was a fan. (And a consumer - I bought multiple TPBs.) I did the same for "Daredevil" as well.

I can say the same about the Flash. Outside of Batman and Superman, I didn't really think much about the other characters, but now I want to read more about the Flash. (In fact, I've added a few to my wishlist if anyone is feeling generous. ;) Definitely check it out. And before folks ask, no, I haven't watched "Arrow" yet. I'm going to check it out after I run through a few more Netflix series. (I need to finish "Luke Cage" and the second season of "Narcos".)