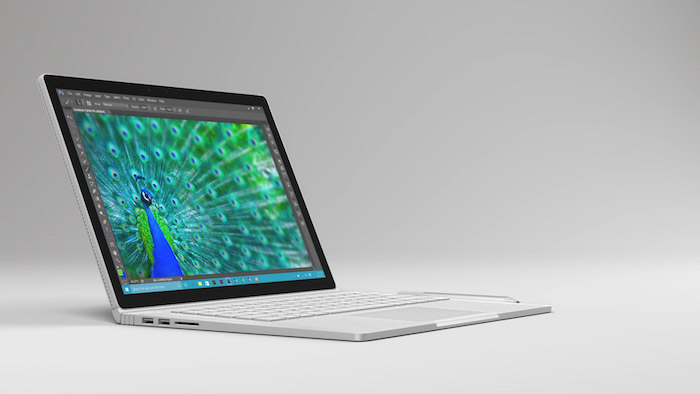 A Disclaimer: Microsoft provided me with the hardware I'm reviewing. They asked me to share my feelings about it in exchange for letting me borrow it. Also, I'm not a professional photographer, so the product shots I'll be sharing today will be a bit meh. The lovely picture you see above is courtesy of Microsoft.

While my very first computer was an Apple (the venerable Apple 2e), I spent most of my "professional" developer life using Windows machines. I was fine with that. Windows had warts. My systems would tend to slow down and run out of disk space after a year or so. But honestly, I still see that with my Macs as well. Windows was just fine.

That being said, I decided to switch to Apple about five or so years ago. My first Macbook Pro was a revelation. Light weight, fast (to be fair, it was also my first SSD system), and the UI was far simpler than Windows. It was great. Heck, it still is... mostly. I've worked on three different MBPs now and for the most part, they've been good machines, but not necessarily interesting. I've sat through release after release, and while OSX (sorry, macOS, right?) works, I'd be hard pressed to tell you anything actually interesting, or helpful, about the last release. Sure, Siri is built in, and, yeah, shrug, I used it once or twice. I honestly can't tell you off the top of my head of anything else new in Sierra. I know there's a lot more, but nothing that's actually impacting my day to day life. I'd love to be able to instantly sign on with my 500 dollar plus iPhone 6+, but apparently I need to buy the multi-hundred dollar watch first because... reasons.

So yeah, I'm rambling a bit but I wanted to give a bit of context as to the mindset I've been in for a while now. A few months back I was attending a conference where Microsoft had a booth setup. They were running a contest where you would do something - sign up for Azure I think - and you would get a pretty nice gift. (I got the Microsoft Arc Touch Mouse - which is freaking cool as hell.) In order to do the sign up, they had a row of Surface Books set up for you to use.

To say I was impressed would be an understatement. The screen was incredible. The keyboard was great. Everything worked nice and quick and it just felt like a damn good piece of hardware. Obviously I only had it for 5 minutes or so, but I can never remember being that impressed with a Windows machine before.

Fast forward a few months and I began to think more about the Surface Book and perhaps giving it a try as a new development machine. I had a few friends at Microsoft and when they heard this, they hooked me up with the unit I have now. (Again, see the disclaimer on top!) In this post, I'm going to talk specifically about the hardware aspects of the Surface Book. I'll talk more about Windows, and other stuff, in my next post. (In a few days.) 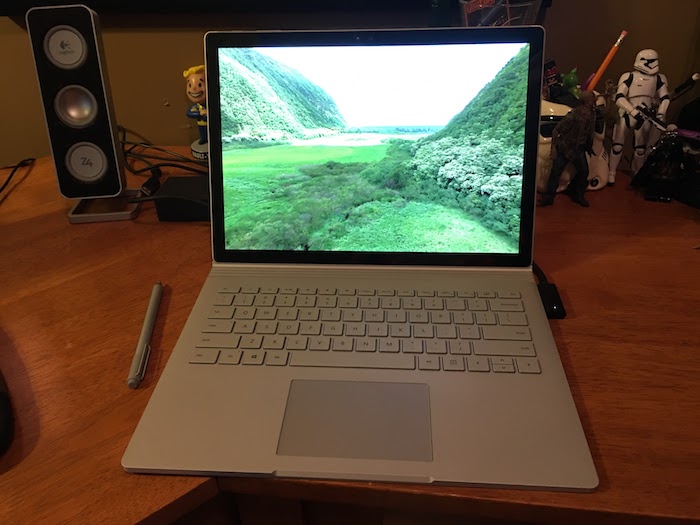 Again - I apologize for the quality of these pictures. I tried my best - honest.

One of the first things I was worried about was the screen size. I've had 15 inch MBPs since my first MBP, and I like that screen factor. It's big, but I like the real estate. I knew the SB was smaller, but at 13.5, it doesn't really look that much smaller, and it feels like less of a weight on your lap than the MBP. (I just checked Google, and apparently the SB is only about a fifth of a pound lighter.)

Here's a snazzy side picture: 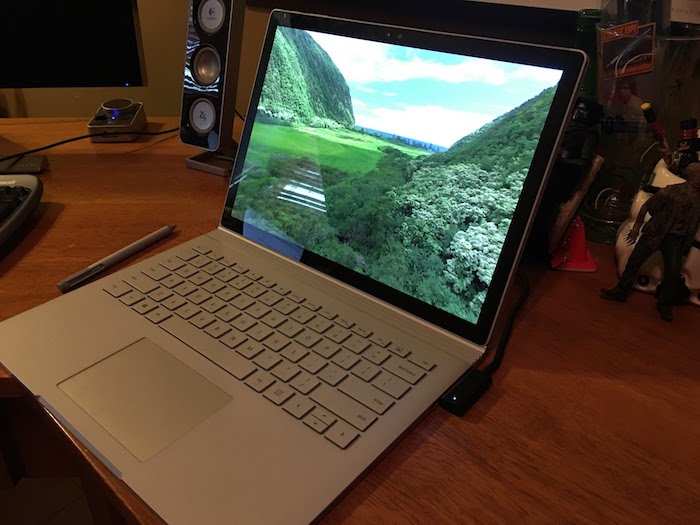 So one of the first things I had to contend with was how to plug the darn thing in. The power plug is on the right side (you can see it in the picture above) and the connector itself is a bit freaky looking: 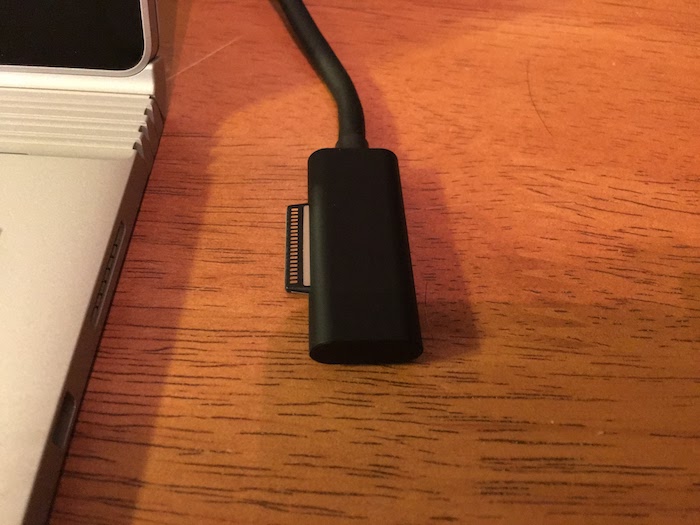 Yeah - weird, right? But it works just like my magsafe connector on my MBP and I get the impression that it's actually going to be a bit more stable. I love magsafe in general, but my last generation MBP's magsafe connector falls off if someone even looks at it. I'm still new to this hardware, but the design of this feels like it will stick in a bit nicer. (A quick note - what you are seeing here is the connector for the Surface Dock. I'll talk more about that later in the blog entry. The connector for the basic power cable has the same weird teeth-looking part, but is smaller and more flush to the device.)

And here is a picture with the SB sitting next to the MBP, just to give you an idea of the size comparison. (I think the Mac looks a bit offended to be in the same physical space.) 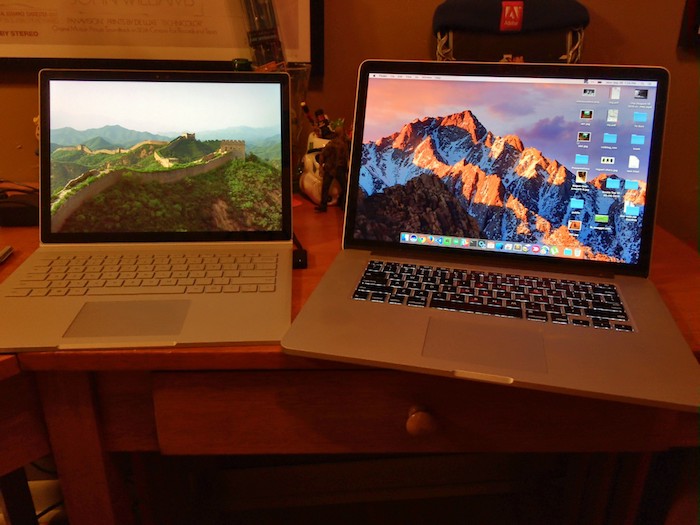 As I've said a few times now, and the pictures don't do it justice, the screen is beautiful. Like, damn beautiful. And it's a touch screen. That seems unimportant until you actually start using a device that supports it. I find myself using the touch screen to scroll long articles and I like the tactile feel of it. Heck, it's probably slower than using the trackpad, but in some cases I prefer it.

Another surprising aspect of it is the quality of sound it generates. When I'm not at a conference (or on stage), I'd say I have music coming out of my laptop nearly 100% of the time, and the SB creates a really rich, warm sound that I didn't expect. Of course, using headphones with the SB is supported, but you have to connect to the upper right corner of the screen. Which is weird until you remember that the entire screen detaches so you can use the SB as a tablet.

You start off by clicking, and holding (so a stray click won't matter) a dedicated key: 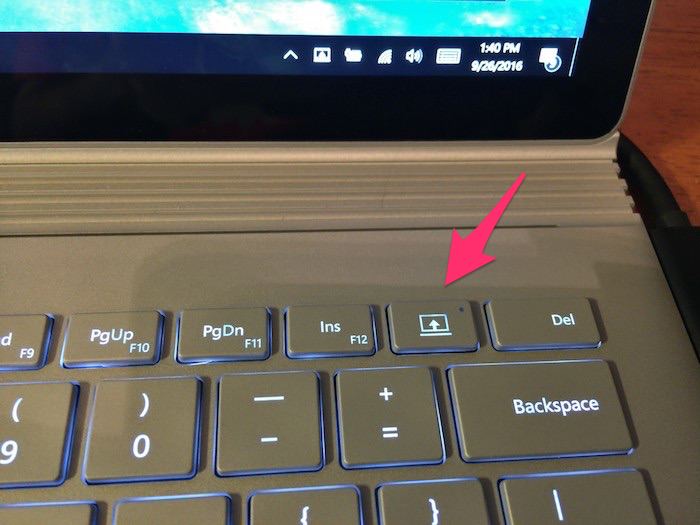 It makes kind of a sickening "crunch" sound, but you can then remove the screen portion. All in all it reminds of the SDF-1 transforming. A reminder in case you aren't up to date on your Macross:

Ok, so it isn't quite that dramatic, but it's still pretty freaking cool. Here is the screen after being detached. You can't see it, but I'm watching it closely in case it falls over. Yes, I'm a bit of a freak like that. 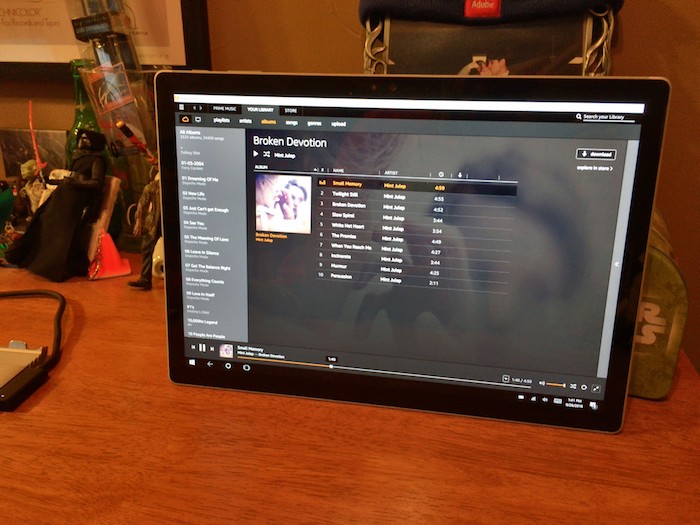 And here is a shot of me holding it: 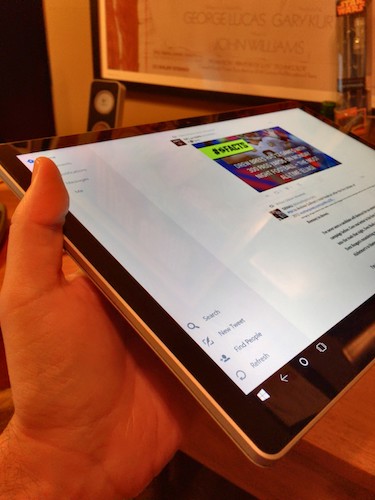 As you can tell, it is a bit large for a tablet. I think it may be a bit unwieldy for "casual" use. I'm fine with that as I don't see myself replacing my iPad with this. (I've got too many iOS games I'm addicted to.) But I can see it being a compelling use for a lot of people. Personally, I get nervous whenever my tablets and phones don't have dedicated cases around them. I've actually never broken a device once, which is pretty amazing when you think about it, but I'm also paranoid as hell about my hardware. Cases wouldn't make sense in this case (you wouldn't be able to re-attach it to the keyboard) so I'm thinking I won't be using it as such. One place I do see myself using it is on an airplane. I normally spend most of my flying time watching movies and this could be a damn good screen for that.

In case you're curious - re-attaching is pretty simple. It's magnetic and just plain works. Normally. I'd say about 30% of the time I've re-attached Windows didn't recognize the hardware/mouse was there. I just disconnected/reconnected and it worked.

So... what else? Battery life seems ok. I haven't "field tested" it yet which for me would be at a conference where you have to fight for power, but it seems ok. On unplugging it, I get a reported 4 hours of battery life. That's at full brightness though. I can say it seems to charge slower than my MBP which is the only real negative I can think of in terms of hardware comparisons.

Speaking of - the details. My unit has the Intel Core i7 CPU with 16 gigs of RAM. It has a dedicated GPU (more on that in the next post) and 512 GB of SSD drive. I believe that Windows (and related stuff) took about 60-70 gigs) when I started using it, so keep that in mind if you go for the 256 GB unit. I'd probably stay away from the 128 GB unit unless you really know you won't need a lot of space.

My unit has the pen too. I used it to create this: 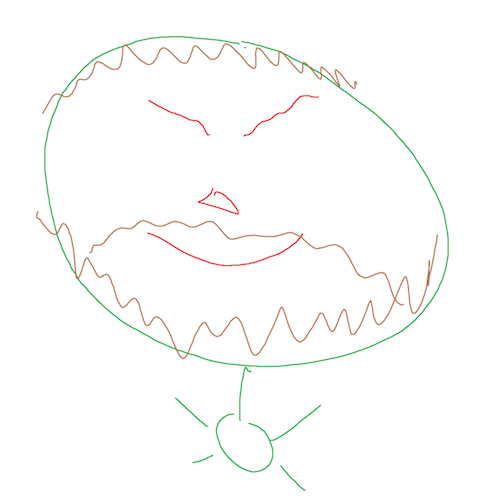 Yeah - have I mentioned that I'm not a designer? This is something else I'll probably never use and obviously that isn't a reflection on the hardware itself. It works great. (It even has a magnet connector that lets you attach it to the left side of the screen.) I just don't draw. Ever.

As I mentioned in the beginning of this article, my main focus here is on the hardware. In the next entry I'm going to focus on the software, specifically what it's like coming back to Windows after so many years "on the other side". Overall, the Surface Book is a damn fine piece of engineering. I've got some issues with the software I'll detail in my next entry, but so far, I'm incredibly impressed.

Raymond...this is one of the best articles I have read about this device. I get so tired of reading things that sound like they are copy and pasted from one review to another ( so so unoriginal they are) and this was very entertaining as well and some good down to earth information and user feedback! Here are a couple of things I wish you would have talked about, and maybe I missed it...but what you think of the hinge gap and moving the device around the house for work and travel, i.e. size and portability and lapability? Did you have any problems with it? (I read horror stories about it but we all know there are a lot of people who don't even know how to turn ON a computer so we should all take those with a grain of salt!) AND...could you use this or will you be using this as your daily driver? Great article..Im jealous you got to test and review it! Wish I had that opportunity you had. HINT HINT MICROSOFT! Call me!
Thanks a lot once again

Thanks for the kind words. :)

Keep in mind my normal laptop is the 15 inch MBP, so the SB is definitely lighter and easier to port around. If you are *coming* from a 13 inch model though it may not be the same.

As for my 'daily driver' - still figuring that out. :)

How about the hinge? Some people hate it.

Shrug - it's different - it looks cool - but... it's a hinge. Not sure how folks could feel *anything* about it if you get my meaning.