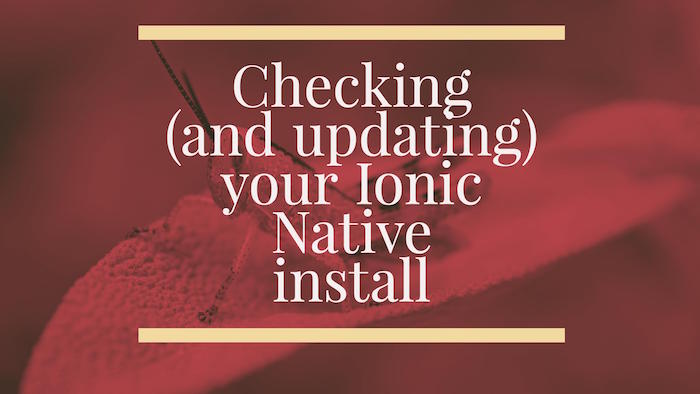 Ok, so this falls under the "pretty obvious" category, but as I had to figure it out this morning I figured I'd blog it to help myself remember. I've been playing with Ionic Native as I learn Ionic 2. I wrote up my first experience with it a few weeks ago ("Working with Ionic Native - Shake, Rattle, and Roll". As I work on my next couple of examples, I ran into a few issues.

First off - I did the right thing and filed a bug report on the Ionic Native GitHub repo. If you run into issues with the code, don't forget to start there.

Secondly - Ionic Native is installed via npm. That means you can use regular npm commands to both check for and perform updates. So first off - to see what version of Ionic Native you have, simply do npm list ionic-native:

And then you can check against the published version by using npm info ionic-native version:

And then just npm update ionic-native to get the bits.

So yeah, this is pretty much the same you would do for any npm package, but I thought it might be helpful for Ionic folks who may not be terribly familiar with npm. Don't forget that you'll want to ionic build to regenerate your code, or just emulate/run.