A few days ago I blogged about my experiences building a simple RSS reader with NativeScript. Today I'm coming back to the application to take care of two problems I mentioned in the previous post.

The first problem I wanted to handle was checking for network connectivity before trying to load the RSS feed. In Apache Cordova, this is done via the Network Information plugin. I began searching the NativeScript docs for something similar and was surprised to discover that nothing like that existed.

Except I was wrong.

I kinda touched on the docs in my first post on NativeScript. I mentioned how I thought the tutorial was well done, but I found the rest of the docs a bit awkward at times. I'm upgrading that initial impression from "awkward" to "frustrating." There are multiple issues with the docs that makes finding particular APIs kind of difficult. As an example, I needed to figure out how to navigate to a page but specify no back button. I knew that existed but it took maybe 15 minutes to find the darn docs, and I only found it this time because I remembered the particular name of a class. I couldn't get there via straight clicking.

To make matters worse, the code that handles what I needed to do is found under the "Cookbook" section of the docs. Now I don't know about you - but to me - "Cookbook" implies a set of examples in the form of, "Do X with NativeScript". It absolutely does not imply "API Reference", but that's what it is. Kinda. I honestly don't know. I did find the network connectivity stuff there, but then other things like UI components are not there. The docs really need a clearer TOC or organization. All the stuff is there, but now that I'm beyond "Hello World" in NativeScript, I'm struggling to actually use it.

Enough complaining - and as an FYI - I did the right thing and tried to summarize this in reported issues on their GitHub repo.

To detect a network connection, you simply need to import the connectivity module. I added this to my initial JavaScript file for my view. Maybe I should do this in my app.js instead. I then simply ran connectivity.getConnectionType(); to get the type. This returns a value that represents either none, wifi, or mobile. You can also use it to monitor changes as well. To keep things simple, I just check it once. Here's my new main-page.js.

As you can see, I simply navigate to a new view if the user is offline. Note the use of navigationEnty as a way to pass configuration information about the transition itself. For my new view, I simply added a message and a button the user could click to see if they were online. Again - the connectivity module supports events so I could have automated this. First - the view.

And here is how it looks. 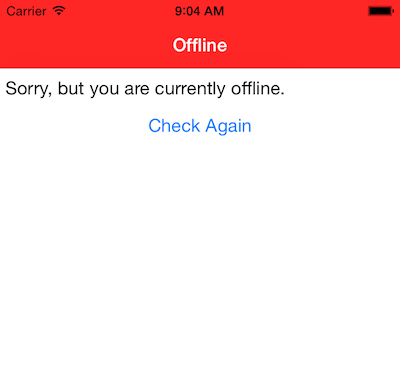 Not the prettiest UI, but that's my fault, not NativeScript. For now, it gets the job done. Here's how the button works.

This is pretty much what you would expect - check connectivity and if still bad, let the user know, otherwise send them to the home page.

Woot! Ok, now for the next change. Some RSS feeds only provide a snippet of text. I wanted to do something similar to Cordova's InAppBrowser, a "mini" web browser that can be closed leaving the user back in the app. I was not able to find that for NativeScript. I did, however, find a way to at least open the system browser. I began by modifying the view to include a bottom at the end of the page. (Thanks to the helpful folks in the NativeScript Slack channel!) Here's the new code.

And here's the result:

The code for this is pretty simple:

And it works as expected: 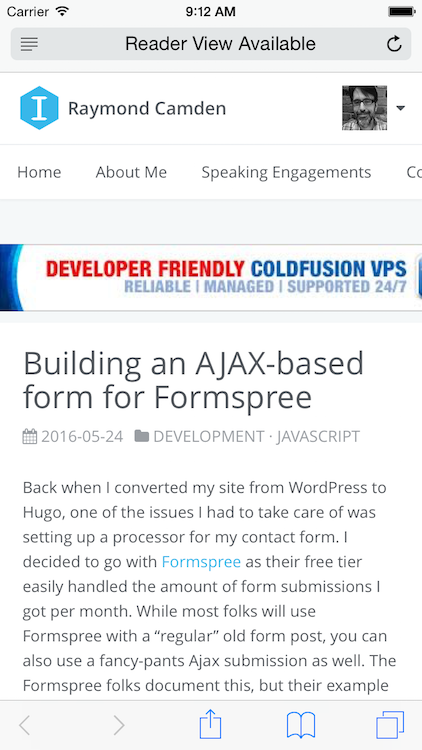 The big issue though is that the user has now left the app and may not know how to return. Maybe someone in the NativeScript community would have a suggestion to help out here.

Anyway - as before - I've included the full source code of this in my NativeScript GitHub repo. You can find it here: https://github.com/cfjedimaster/NativeScriptDemos/tree/master/rssTest2

Love the article and definitely agree with you about the “cookbook”. I’ll see what I can do about improving the UX there.

For your example you probably want to use the {N} <WebView> control, so something like <WebView url="{{ link }}"></WebView>. The docs are hidden in the same cookbook section, and quite frankly aren’t very good: http://docs.nativescript.or.... Feel free to ping me on Slack if you want help getting that up and running.

I saw that and considered it, but I wasn't sure how it would look. One thing the Ionic docs do well (although not 100%) is show visual examples of controls. NativeScript could use that as well.

So I assume I'd swap out my HtmlView tag with this? And that's it? (And of course change the attributes.) How does it look?

Ok, I tried that, but no go. I just get a white screen. I'm boarding a plane so will be AFK for 3 hours. Gist of my change (and I change code behind to support the link) - https://gist.github.com/cfj...

Ok ignore me. I got it working. Boarding in seconds. I'll post more thoughts later. Frankly, this is superior - although I like this *and* the option to open in the system browser too. Now I'll have a "part 3" for later next week.

Agreed about the visual controls. It’s a bit tricky for us, since we’re not web based and can’t actually render our controls in the browser, but we could certainly be better about embedding images. The best we have right now is on the “Components” page in the docs. Here’s the WebView there http://docs.nativescript.or....

Hmm - that's pretty clear. I must have missed it before. Oh - I think I know why - I went here: https://docs.nativescript.o...

Hey Ray, I'm also currently getting into NativeScript, so I just wanted to check if you will post your new solution as part 3 of the tutorial? Thanks anyway for the first 2 posts!