Almost two years ago, I finished my rewatch of ST:TNG. This was a series I had seen most of as a kid, so it wasn't terribly new to me, but it was great to experience the series again. I left it with a greater appreciation of Star Trek and TNG in general. Sometime after that, I began rewatching Deep Space 9. This series came out while I was in college, and to say that I was a bit too busy for TV would be something of an understatement. I did watch some episodes, but probably not more than ten or so. While I knew the setting and a bit about the characters, I didn't really have any feel for the overall tone or quality of the show. Now that I'm done, I want to kick myself. DS9 is - easily - the best Star Trek I've ever seen.

I really enjoyed TNG, and at times, it was incredible. But DS9 was consistently one of the best television shows I've seen. During my rewatch of TNG, I tended to focus (and get more excited about) the story arcs, the "big events", etc. One thing I noticed about DS9 is that while they had great multi-story arcs, even the simple "one offs" seemed to be given the same amount of attention and care in terms of writing and acting as the big events. I can remember an episode starting off and thinking, "Ok, so this is one of the funny ones, it won't be terribly deep", and then something would happen that give me an incredible new insight into a character, and I would absolutely see these details brought up again in later episodes. It's like every episode was treated like the premier/finale. No one in this show ever slacked off. They gave it all of their passion for every single episode over seven years.

The Ferengi, which were barely used in TNG, really shined here. Most of the time there were played for comedic effect, and that was fine, but I loved how much attention they got as a race. Quark, especially, was a great character. The interaction between him and Odo was great to see over the years. But my favorite Ferengi was Nog. 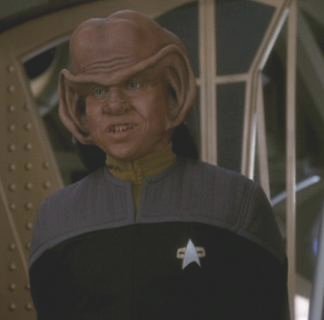 During my rewatch of TNG, I paid special attention to Crusher's character. Mainly because everyone seemed to hate him and I wanted to know why. While he was a bit annoying at times, I honestly felt like I would have been the exact same in his position. Given a chance to join Star Fleet, I would have been just as eager as Crusher.

Nog reminded me a lot of Crusher, but while Crusher was eager, Nog was completely passionate about his dream to enter Star Fleet. This may sound ridiculous, but I swear I felt proud when he was able to get in. I had a huge grin across my face and I was really happy about it. His development through the series was very well done and one of my favorite parts of the show.

On the flip side, the Cardassians were great too. They were evil, but... stylish. Nothing like the Klingons or Romulans, they had a way about them that made them a joy to watch. I actually felt a bit sorry for them when they joined the Dominion. You just knew they were going to be crapped upon and would end up regretting it, and of course that's exactly how things ended up. 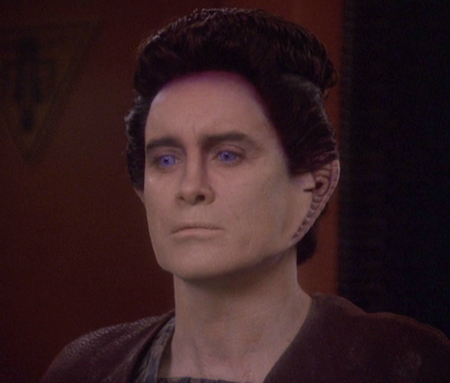 Speaking of the Dominion, I thought the Vorta were really interesting as well. There was one episode where a Vorta and Cardassian were confronting Sisko I believe. The Cardassian was being very aggressive, and Sisko was having none of it. If you watch closely, the Vorta is actually watching the Cardassian instead of Sisko. He's watching him with a look in his eyes like he wants the Cardassian to lose the argument. He is actually enjoying seeing his ally lose the argument. Now it becomes obvious later that this is probably how the Dominion operate, pitting one of their races against an another, but it is a subtle effect and so well done in the show.

Oh, and I was happy as hell that someone recognized that Worf was one of the best parts of TNG and found a way to get him on the show. As before, he had some of the funniest lines, but even more interesting was to see him in comparison to the other Klingons. 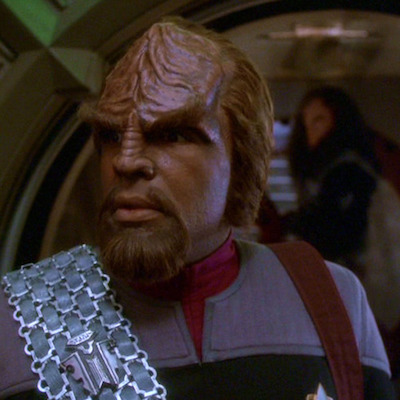 When rumors of a new television series were being thrown around, at least one of them involved the idea of a show with Worf as the captain, and frankly, I think that would be a damn good idea.

So was there anything I didn't like? Not really. I seem to remember one episode in season six that I thought was a bit crap, but it mainly stood out as the rare exception. I can say that I thought it was odd that the main computer system of the station devoted something like 50% of the visible screen space to some weird circle UI. Here's an example: 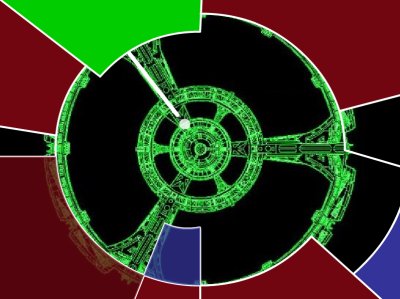 I mean look at that - at least 50% of the available space is wasted. Who in the heck designed a UI like that?

I enjoyed the last two Star Trek movies. They are certainly better than the last bunch before them. They are cool. They are fun. But in the end, they don't have nearly the same passion that I feel DS9 has. DS9 was an act of love and respect for Trek whereas the last two movies were mostly about doing something "neat".

So... next up is Voyager. After a few other TV shows of course. I still haven't seen Babylon 5 and I think it might be time to correct that.

I'm on season 2 of DS9 right now, and really enjoying it. Got derailed a bit by Seasons 2 of Bosch (love Michael Connelly's novels) and Daredevil.

It had arguably the best Star Trek quote: Its a faaaaaake

Remind me - when was that?

IT was a scene with Vreenak where the authenticity of a data crystal would determine the course of history. Sisko had a fake data crystal, hoping it would pass as real.
Once in private, just Vreenak and Sisko, Vreenak lets loose "Its a faaaake". There are a few pretty funny adaptations on Youtube.
https://www.youtube.com/res...