One of the more interesting aspects of the rise of hybrid mobile development is the rich ecosystem of plugins available to developers to make use of within their applications. When I started with PhoneGap nearly five years ago, there were a core set of plugins covering basic device functionality and that was it. Since that time, the available plugins have exploded. Today I'm going to review a commercial plugin offering from Onymos. The Onymos Media plugin is like the default Camera plugin on steroids.

First and foremost - let me state up front that this is a commercial plugin. It isn't open source and it costs money. Frankly I'm ok with paying for functionality so this isn't a deal breaker for me. I know it is for some folks so I want to get that out of the way first. The plugin (and related services) cost $99 a month which isn't cheap, but I can honestly say that this seems like a reasonable price for everything that is offered.

So what does it do? As I said, the plugin acts like an enhanced version of the Camera plugin so the features - for the most part - revolve around capturing pictures and working with videos.

Setup of the plugin is a bit more complex than typical. The plugin itself is installed just like any other: cordova plugin add onymos_components/onymos-plugin-media. But then to use it, you will need to initialize it with your credentials (for the purchased product) and then wait for a callback to know when it is completely ready. Obviously how and when you do this is application dependant. For my test, I simply put it in my main controller and inside an ionicPlatform.ready call.

In the code block above, you can see I'm setting up my configuration values and then passing it to a onymosInitialize function. I then handle the success or failure. In my case, I set some flags in the scope to let me know things were ready.

For my test, I simply wanted to see a thumbnail for video. Currently you can only select an existing video, you can't take a new video, but you could do that with another call and then ask the Onynmos plugin to work with it.

So I won't go into terribly deep detail here, you can read the docs yourself, but one of the core concepts of the plugin that was a bit confusing at first was the idea of a callId. This is basically a unique identifier for a particular media usage. For most people, they will have one media "use" on a view, ie a button to click to work with media. In some apps you may have two. The callId basically creates a handle to one set of data at a time. The rest of the code should make sense. I'm selecting from the photo library and working with all media. I then ask for a thumbnail and set it to a scope variable. Back in my view, I have a simple img tag with a ng-src pointing to this.

Here is a screen shot of the video selection in action. You can see it compressing the video automatically. 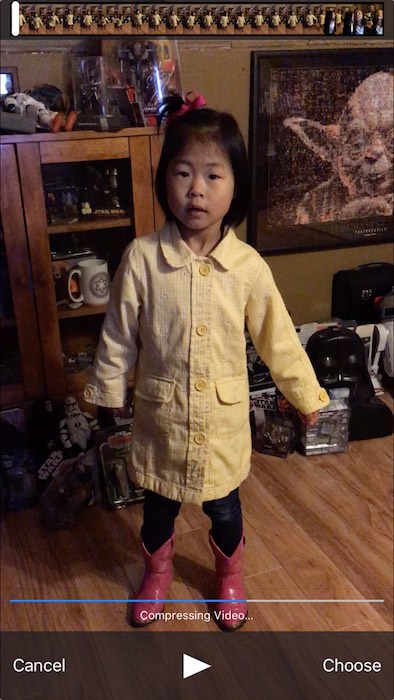 Once compressed, the thumbnail generation works as you would expect. I could have made this quite a bit smaller if I wanted to. 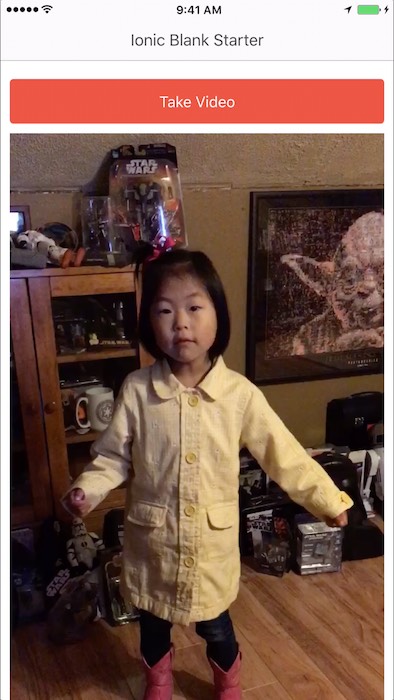 The compression technology is pretty impressive. I didn't play with it much in my demo, but the Onymos folks have an online demo that demonstrates this rather well. The video demo portion is especially cool - they got the size down to 16% of the original and the quality looks darn good.

The other big benefit of the Onymos Media plugin is the upload/search/download aspect. As I said above, you can upload media and store it either on their server or your own S3 bucket. The Upload API is pretty powerful. You can:

And on top of that you can then set an array of tags to associate with the media. This then ties into the Search API. It lets you specify tags and then provides a nice list of results that includes thumbnails. You can also include the media itself as well by pointing to the URI. So for example, a video tag could simply change it's src attribute to load in the result.

All in all, this seems like a very powerful plugin, and while it isn't free, you get support as well and in my own work with the company, they were very quick to respond to my questions as well as my suggestions. In a few places I found the docs to be a bit awkward and they were quick to listen to my ideas and help me out. Definitely check them out and keep an eye out for their other plugins coming soon.

That's not really on topic for this blog post.

k tell me how to compressed the video data in ionic

k tell me how to compressed the video data in ionic

Buy this plugin. There ya go.

Raymond, I know it's off topic but you know how I can check if another app is playing some media?

I have a radio app that plays in background and would like to pause the audio when another app start playing some media.

Hmm, that's a good question. I don't know. I'd search for 'audio' in the plugins directory. Also, look in the Android docs for the same topic. Remember, if it can be done natively (Android or iOS I mean), then you can build a plugin for it.

Thanks for the article Ray. Have you ever tried the Cordova video editor plugin? It doesn't have the s3 integration but has robust options on video transcoding and also thumbnail creation from video (specifically the ability to specify the time in a video to create a thumbnail). The plugin is slow on android because it uses ffmpeg but on iOS it is really great. I'm planning on rewriting the android side of the plugin but I need to get a newer android device first.

If you're interested in trying it I made a sample Ionic 2 app that uses the video editor plugin and a media picker plugin I created - https://github.com/rossmart... - it runs great on iOS devices but I've yet to try it on android. Let me know what you think if you give it a shot.

Nope, I have not tried it, but thank you for sharing info on it. It actually uses ffmpeg *on* the device?

Yeah on android it uses an ffmpeg binary on the device. I have the android side of the plugin using android-ffmpeg-java. For android I plan on revising the transcodeVideo function to use android-transcoder (https://github.com/ypresto/.... Performance is really slow with ffmpeg due to it not being optimized for the mobile devices. Improving the plugin performance on android is at the top of the list but I need a newer android device first (https://github.com/jbavari/....

The iOS side of the plugin is much better, I recently made it use the SDAVAssetExportSession library which really opened a lot of potential (https://github.com/rs/SDAVA....