As I've mentioned more than once now, I'm really happy with how much Ionic Creator has improved recently. For this blog post, I thought it might be useful to demonstrate how you could go from a "static" Ionic Creator proof of concept to a dynamic one that made use of a real API. For hard core developers, this is probably not going to be very helpful. But I imagine Creator will attract folks who may not have a lot of experience working with JavaScript and APIs so I thought a concrete example would be helpful. As always, if anything doesn't make sense, leave me a comment and I'll try my best to help out.

Let's begin by discussing the type of application we're going to build. It will be a simple "Master/Detail" example where the initial page is a list of items and the detail provides - well - detail. As a completely random "not related to anything recent" idea, let's use Star Wars films for our data.

It just so happens that an API exists, SWAPI, that provides information about Star Wars films. In fact, I've already released a helper library for this API: SWAPI-Wrapper. We won't be using that helper in this blog post, but just remember it if you decide to actually use this data in a real application.

Creating the Static Proof of Concept

We'll start off by creating a new application in Ionic Creator. Remember that this is 100% free to try. You only need to pay if you want additional projects. (You can find more detail on their Pricing Page).

Begin by creating a new project, the name doesn't matter, and use the Blank template: 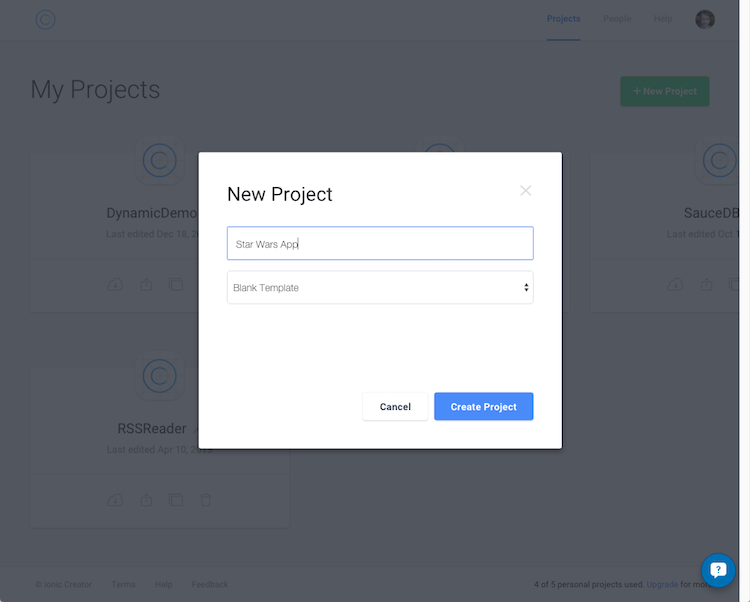 This will drop you into the editing interface with a blank page. On this page we'll do two things. First, we'll edit the title to give it something that makes sense for the app. 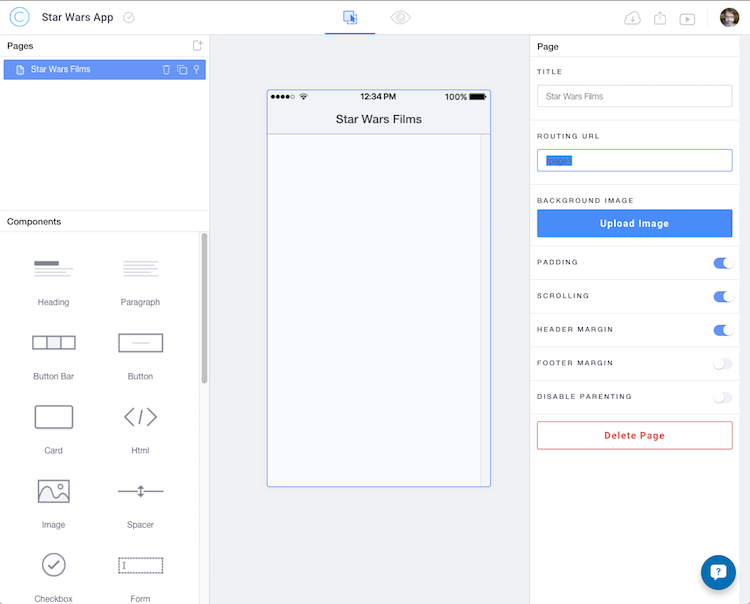 Then we'll drag a List component onto the page: 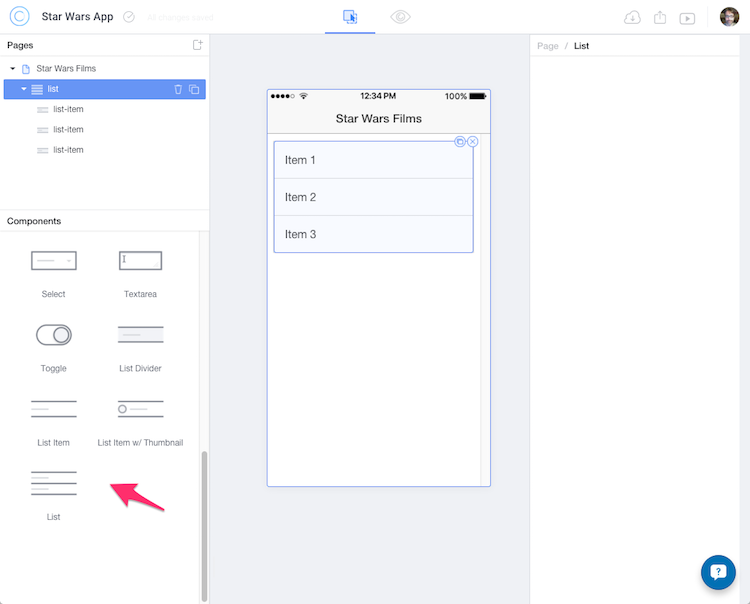 Notice how it adds 3 list items automatically. If you want, you can remove some, or add some, but for now, three is just fine. If you click each one, you can give them a unique text value. While not necessary, I'd go ahead and do that just so you mentally keep in mind what we're actually building. 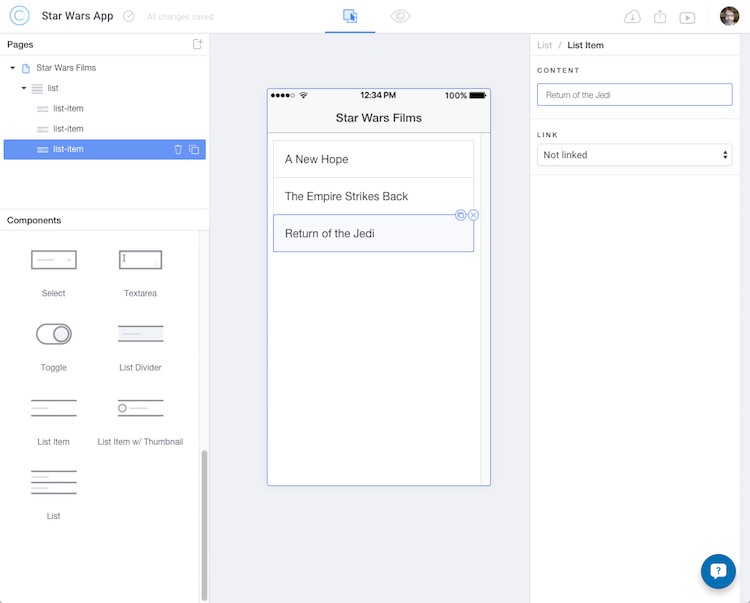 Notice that the list items have a "Link" attribute. We can use that to add basic interaction to our demo, but for now, we don't have a page to actually target for that link. Let's fix that by adding a new page. Be sure to use the Blank template again. I gave it a simple title too: 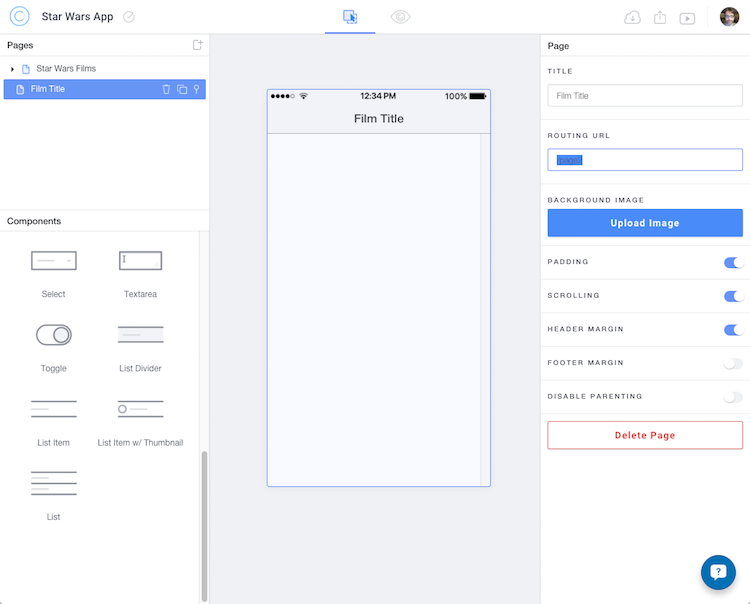 This page represents the detail view of the film. Right now we don't necessarily know what we're going to show, so let's keep it simple and imagine we'll just show the opening crawl. On the off chance that my readers have never seen a Star Wars film (for shame), this is an example of what I mean:

For now, let's just use a bit of static text. Drag the Paragraph component onto the page and then edit the content to be something that describes the purpose of the text block. 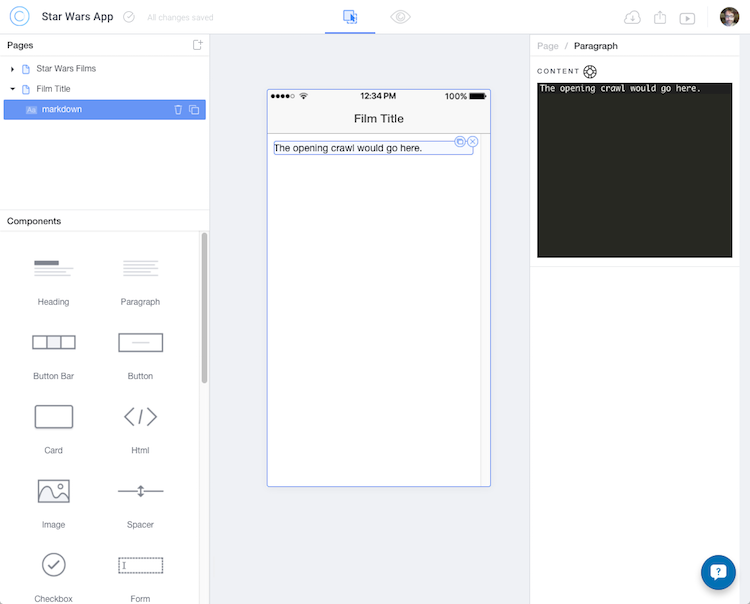 Now let's hook up the list from the first page to the detail. Now, in the real application, each list item would link to a page showing different text based on the selection. However, the dynamic aspect will be handled by code we add later on. If you were to demonstrate this dummy app to a client, you may need to make 3 distinct pages so they don't get confused. If you do, don't forget that you can select the page in the left hand nav and click the "Duplicate" icon.

For now, click back to the first page, and select the first list item. Note that you can now select a link that points to the new page. 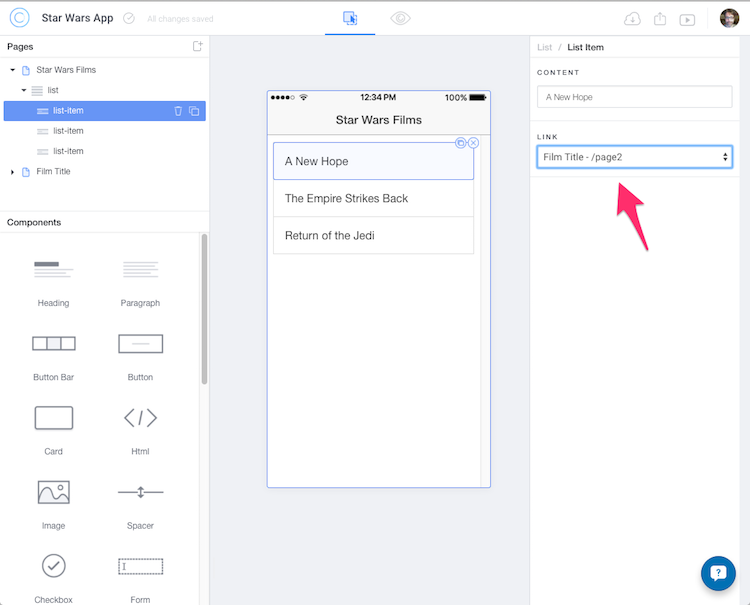 Go ahead and do that for all three list items (and again, you don't really need to) and then click the Preview icon on top to test out your beautiful, if fake, application. 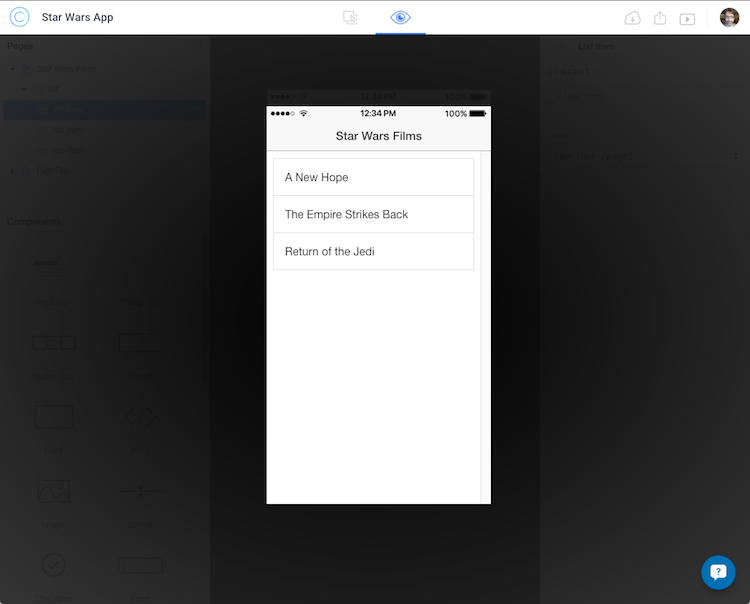 Woot! We're done with the prototype!

Ok, so at this point, we've got a working prototype. The first thing we need to do is get a copy of the code. You can use the Export menu option to open a window showing you four different ways of working with the code. I recommend using the Zip File. While we can create a new application from the code of the prototype directly with the CLI, I think it would be nice to have a copy of the prototype locally to compare and contrast while working on the new version. 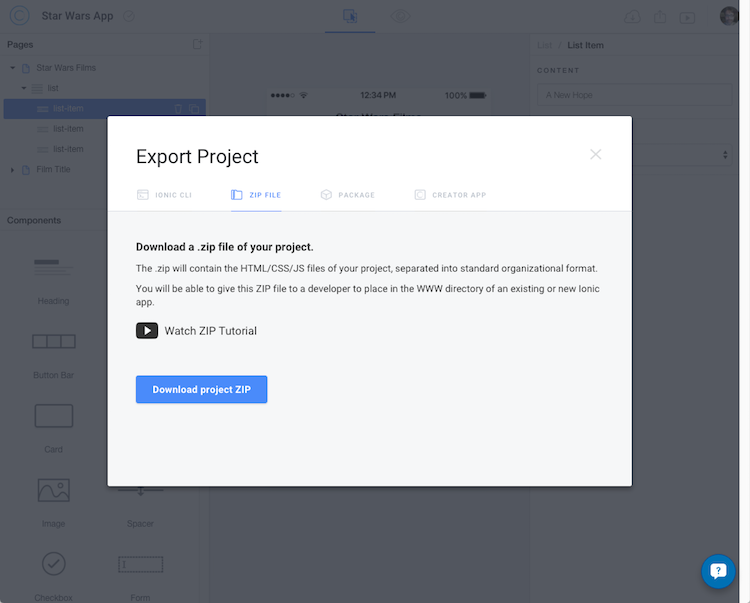 I recommend creating a new folder for this project, and then extracting the zip into a folder. (All of my code for this blog entry is in GitHub, and that's the way I laid out stuff there as well.) Assuming you've done this in a folder called creator_version, we can use the Ionic CLI to create a new application based on the contents. That command is:

The "v1" part there is the name of the subdirectory. As you can guess, we're going to iterate a bit from the original Creator version to our final version. Why?

We're going to create a "Service" in our application responsible for returning the list of films. Our plan is to use SWAPI remote service, but to keep it simple for now we'll build a service that returns 3 'fake' films. We'll then edit the first page to render those films as if they had come from some remote service. Essentially we will go from static to "Dynamic with Fake Data". After we have this running well, we'll then use the "real" service. (This part of the process is very important. So if it doesn't make sense, let me know in the comments.)

Ok, so go into the v1 folder and open it with your favorite editor. We need to modify three things to make the initial page dynamic. Let's start with the template. Right now it is hard coded for three films:

We'll begin by removing two of the ion-items and making the third dynamic.

There's two important things here. First, we are repeating "film" over "films". We don't have that data yet, but I know when I build it I'll have it return an array of films. I also guess that I'll have a title value and an ID that uniquely identifies it. (This is actually going to be a mistake, but that's ok, it's a good mistake!)

Now let's look at the controller. By default Creator made a blank one for us called starWarsFilmCtrl. We need to edit this to work with data.

Ok, so what in the heck is FilmService? We haven't written it yet! Basically we're setting up the controller to work with a service we'll write later that's going to return our array of data. Note we use $scope.films to set the initial, empty array. We can then call the service and set the result.

Let's go ahead and update the other view first. The detail page begins like so:

We need to make the title and text dynamic. Here is the updated version:

Why did we switch to ion-nav-title? See this blog post for an explanation. Basically we need to use that directive to handle dynamic titles.

Ok, so now let's go and update the controller.

As before, we're using a FilmService that doesn't exist yet. I'm calling the service in a way that makes sense to me (first GetFilms then GetFilm). The $stateParams part relates back to how we handle navigation. In the first view, make note of the ui-sref part. This handles changing to a new state and passing a unique id. In order to make that work, we need to do a small change to the routes.js file. Right now it has this hard coded route:

In order to handle recognizing an ID, we modify it to this:

Alright - so now for the final part, we build the service. We're going to write it to "agree with" what the controller was expecting. Here's the complete code:

So let's quickly review what we did here. We updated the completely static application to be partially dynamic. Both the initial page (the list) and the detail are now dynamic. The controller speaks to the service to ask for data, returns it and makes it available to the templates. The data itself may be static, but every other aspect of the application is now dynamic! Woot.

At this point, I recommend taking the app for test drive just to ensure it is working correctly. Here is it running with ionic serve -l: 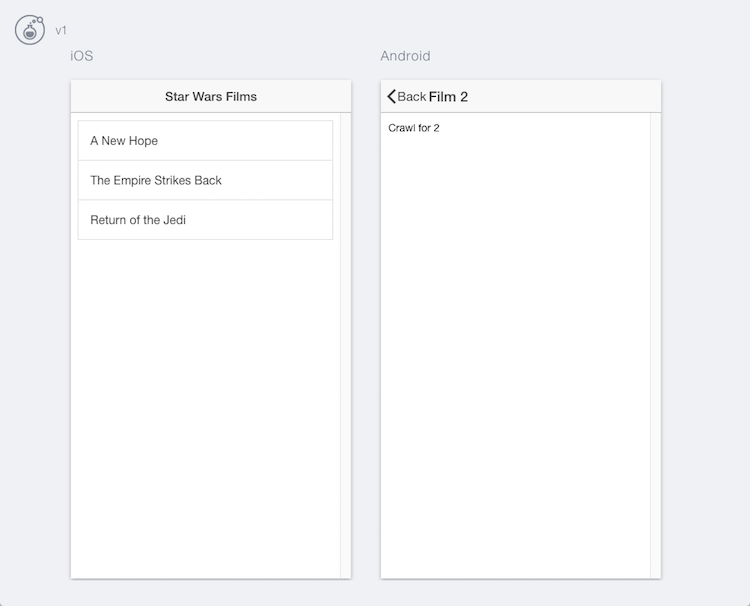 If you want, edit the services file to add a new film. When you reload, you'll see the new item show up.

Alright - so in theory now the only thing we need to is update the services file to use SWAPI. In theory. As I kind of alluded to before, we're going to run into a small issue but that's ok - we're professionals and we can handle it. Using SWAPI is pretty easy (and you can read the docs for a full explanation), so let's begin by making the call to get films use real data.

Here is the updated version:

Yeah, that's it. Literally just a call to a URL. As a quick note, we modified the services injected into the file:

So in theory, as soon as you test this, it works. You should see a complete list of films: 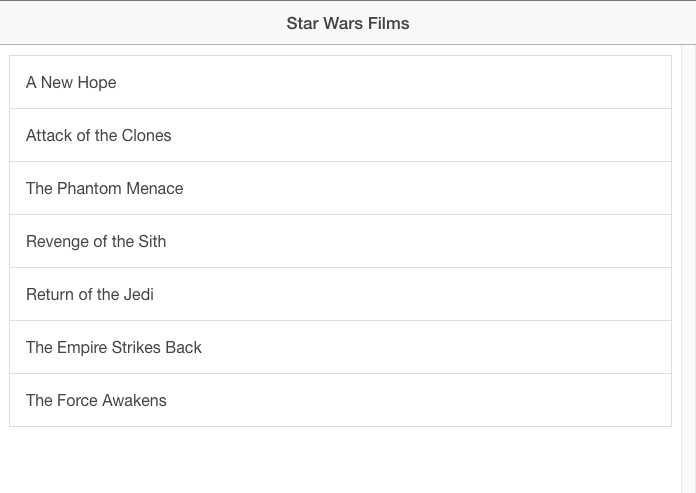 However, clicking to the detail won't work. Why? The SWAPI doesn't actually return an "id" value. Notice the console.dir on the results in the code snippet above? It's currently commented out, but if you remove the comments, you can see the data yourself. This is also fully documented as well.

So what do we do? We need a "unique" way to identify the film so we can fetch the details. Turns out there is a url property on the film. That points to the film's detail on the API. We have two options here. We can actually modify the data in the service file so that id does exist and uses the URL. Or we can simply modify the template to use the new property. I prefer to keep the template as is and modify the service. Basically my code gets to pretend that SWAPI returned the data as I expected:

The last modification is to get film details. We're passing in the URL value so the code here is rather simple: 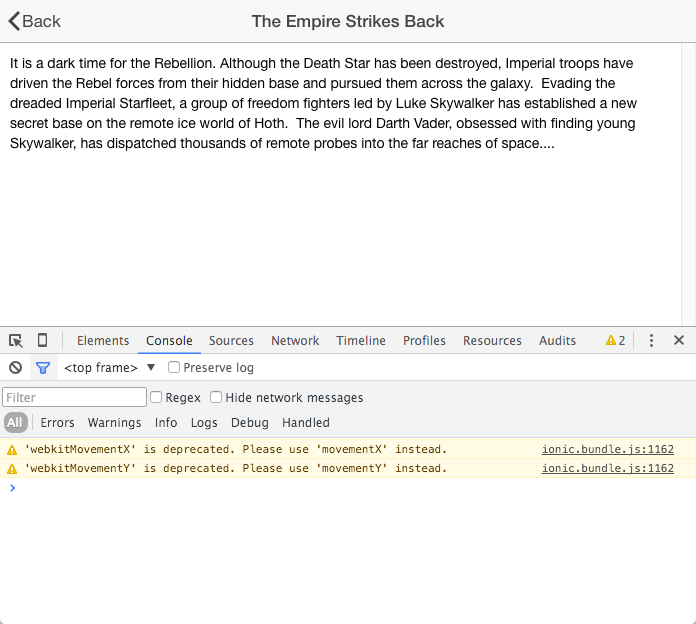 Obviously every application will be different and our API was especially simple, but I hope this demonstration was useful. If you want to look at the code, you can find it here: https://github.com/cfjedimaster/Cordova-Examples/tree/master/statictodynamic. As I said, please let me know if anything didn't make sense.