Yesterday was a big day for Swift developers - Apple announced the open source release of the Swift language. There's a new home for this initiative, Swift.org, and the complete source for the language is up on GitHub: https://github.com/apple/swift.

Swift is an interesting language. I learned ObjectiveC about a year or so ago when I was still working for Adobe. I respect the language, but it never felt like one I'd like to use on a day to day basis. I've just played a bit with Swift, and it feels a lot more approachable then ObjectiveC, especially for those of us who may be coming from a web background and have pre-existing knowledge of JavaScript.

By open sourcing Swift, Apple has really broadened the environments where Swift can be used. You could now consider using Swift on the server, which is a powerful combination if you're already using Swift in your mobile application. Having one language for both the front end and back end is pretty darn compelling!

So where does IBM come into play? We've partnered with Apple to help the Swift developer community. You can read more at our developer center:

At the Swift@IBM, you'll find articles, links, and even cooler, a web-based Sandbox that let's you test Swift in your browser: 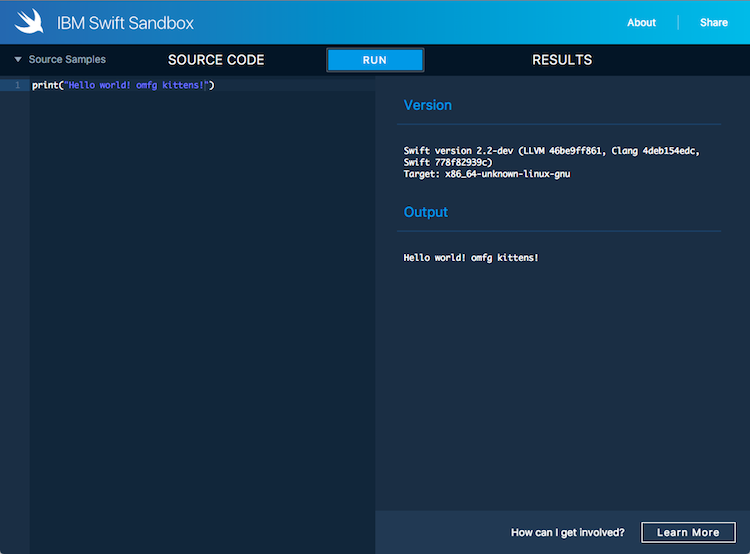 Make sure you use the drop down on the upper left side to try out the different samples. I missed that at first. XCode itself provides a way to test code, but I found this web-based sandbox a lot easier to use.

In 2016, I plan on focusing on two things - Node.js and Swift. I had already planned on this before the announcement, but this move by Apple just cements my choice.

Finally, for a good perspective on this announcement and what it means for development, I suggest this article: https://developer.ibm.com/swift/2015/12/03/swift-moves-to-open-source-a-development-perspective/