Interested in another way to learn the Ionic framework? Recently they released an interesting little tool called Appcamp. Appcamp is a set of interactive tutorials that walk you through various different aspects of Angular and Ionic. Courses are divided into four sections:

Each course contains multiple sections, and in each section, you are given a set of steps to walk through. You have a fully featured text editor with syntax checking and a preview in the right hand pane.

As you go through the steps you can cut and paste the code but I recommend actually typing it in. I feel like I learn a lot more when I'm actually typing each and every line of code.

The site itself is really well done, and covers some good material. In particular, the Side Menu stuff was interesting as that is a part of Ionic I haven't used yet in an application. On the negative side, I really don't think the Angular section is going to work well for beginners. I think it needs to be greatly expanded and simplified if the expectation is that it will be appropriate for people who don't know Angular yet. If that can't be done, I'd probably remove it, but keep the links to Angular resources as they already have in the Resources page.

As a reminder, don't forget about the Ionic Playground at http://play.ionic.io. It provides a free form web-based tool to test Ionic. It works really well with Appcamp. 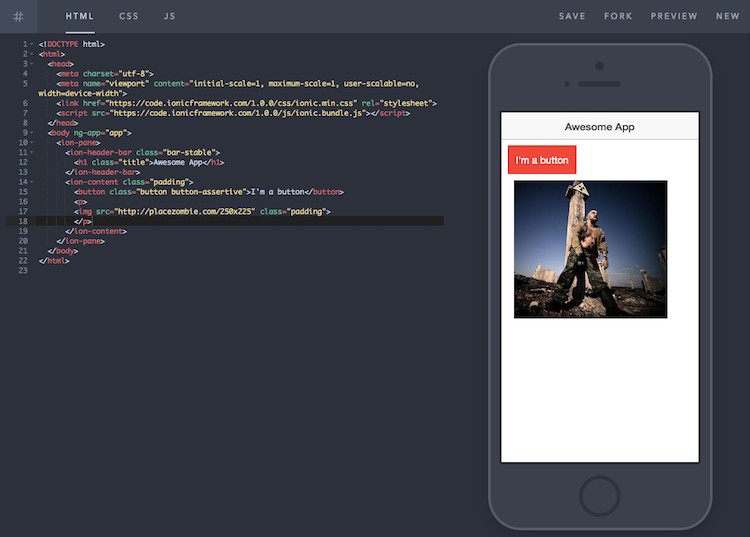 I like where this is going, and hopefully it can be fleshed out even more in the future.

I went through everything last week and agree, it is very well done and good resource getting started. I look forward to them expanding it in the future.