It has been a while since I've posted a game review, but it's also been a while since I've been able to play one. Yesterday one of my boys and I played a round of "Rise of the Runelords", a fairly complex card game by Paizo Publishing. Rise of the Runelords (RoR) is a deck building game which is easily my favorite type of game now. I got into Magic back in college, but couldn't afford, and simply didn't want to, spend a lot of money on deck packs. That's why I really dig games that have a similar experience without requiring a constant stream of purchases. Technically RoR also has purchases, but from what I see they act more like DLC in a video game - adding additional adventures.

Setup is a fairly lengthy process. I'd say our first game took almost an hour to get prepared. That time will be significantly smaller in future games, but it was definitely a bit daunting. Gameplay was right on the edge of what I'd call too complex to be fun. As an example, when you get rid of a card during game play, there's something like four different things that can happen to it. Some easy to understand (discard), some vague (banish, recharge, and some other option too). Every particular encounter (combat, traps, getting an item, etc) is also pretty complex. I'd guess that sometimes there's something like 5-7 options for how to resolve an encounter. But once I got into it, I really dug that. It makes you think about how best to accomplish something and really plan your strategy.

The biggest thing missing from the game is a good reference sheet I think. My son and I both read the rules fairly closely, but sometimes an important detail (like combat!) is buried in with other text that's easy to miss. My plan is actually write up my own little reference sheet during play sessions.

Probably the coolest aspect of the game is that it is persistent across play stations. One play session is a "scenario", which is part of an "adventure path", which is then part of one "adventure." As you finish each scenario you get a bonus that can improve your character. You also get to improve your deck for the next scenario.

Given how busy life is, I'm a bit afraid about how long it will take to actually "finish" the game. I could see this taking a year, but, I'm OK with that. For the price of the game, that's an incredible amount of play time. To be clear, this isn't a one time thing, you can replay scenarios too and restart characters. And as I mentioned above, there are expansion sets that add new adventures.

The artwork in the game is beautiful. The company didn't have any promotional artwork on the site itself, so I'm copying a bit from the PDF ruleset. 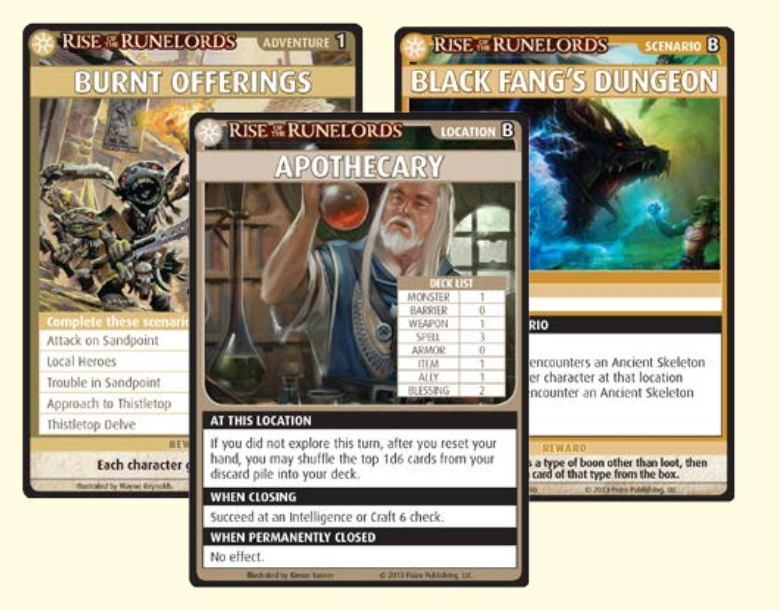 You can see more, and the complete rule set, by downloading the rules here.

I definitely recommend picking it up, just be prepared for a lengthy initial setup and somewhat of a commitment if you want to play through the entire story. Oh, and I died during my first game play but my son and I just pretended that didn't happen. There's no point in playing games where you can't bend the rules from time to time. ;)

A few of my co-workers and I have been playing this game at lunch on Fridays for the past few weeks and it's really fun. Definitely takes a few runs to really wrap your head around all the rules (the instruction booklet does not really explain things that well IMO), but once you have it down it plays really well. Interested to know how you're enjoying it after a few more games!

Have you tried Hearthstone? You can play for free and games don't take too long.

I did - but not in a while. I enjoyed the heck out of it. Didn't stop playing for any particular reason. :)