I believe I may have blogged this before, but a reader ran into this yesterday so I thought it might be worth sharing. If you are using CFHTTP to hit a remote and seeing java.io.ByteArrayOutputStream in the result, there is a simple solution around that.

Here is a sample cfdump of just such a response. You are expecting a string of some sort in fileContent, but instead end up with a Java object: 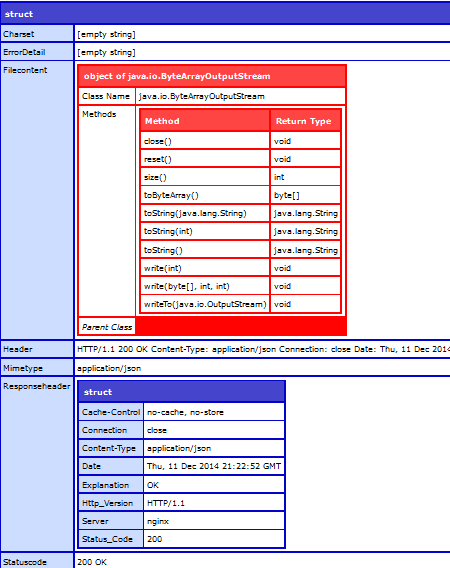 To work with this result as a string, you simply need to run toString() on the value. So for example, if you know the response is JSON:

I'll be honest and say I don't know why some servers return that, or why cfhttp can't simply toString it itself. I'm assuming there is a good reason that probably involves all kind of crap I really don't care about. ;)

p.s. It looks like this might be just ColdFusion 9 and earlier - see this bug report. I can say it has been a while since I've seen it. I've run ColdFusion 10 since it came out pretty much.

I see this a lot working with REST APIs. This is due to the server sending g-ziped data in the post data.

It's not just for gzip. I've seen it depend specifically on the Content-Type of the response in APIs I've created. Using "application/json" would make CF expose it as binary, whereas if I changed that to "text/json" CF would expose it as text.

"....probably involves all kind of crap I really don’t care about. ;)" -> very nicely said! directly out of my heart.

I wonder if CF ever fixed that.