For the past few years (yes, years), I've been rewatching Star Trek: The Next Generation. I watch it on the treadmill as it is a perfect amount of time for a workout (45 minutes) and is great motivation to actually get off my ass and do the exercise. It took years because I had a few diversions on the way - specifically Mad Men (great), Sons of Anarchy (great, but kinda meh now), and Breaking Bad (freaking amazing). It also took some time because - my god - who knew that TV seasons back then were so long. ST:TNG went for 7 years and had a grand total of 178 episodes. I had originally watched ST:TNG when it first came out, but there were a few episodes I missed and I wanted to experience the show again - in its entirety. 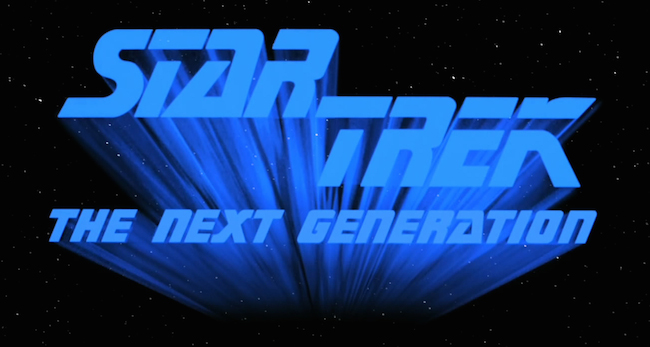 I tend to talk more about being a Star Wars fan, but I've long enjoyed Star Trek. I can remember watching reruns of the original show growing up, seeing the movies, and reading the books. There's something really unique about the Star Trek universe that I never really felt like I got from Star Wars. I know folks have talked about how Star Trek is - in general - a more optimistic future - and I get that. It just feels like I got to know Star Trek a bit better than Star Wars. It felt more... personable if that makes sense. I felt like I got a better idea of the nature of that universe than I ever did via Star Wars.

Watching the series again was a very interesting experience. Those first few episodes were... rough. The cast felt awkward. Things didn't really mesh. They quickly improved, but it was surprising to me. Easily the brightest part of that first season was John de Lancie as Q. The 10th episode of the first season, "Hide and Q", has an amazing scene where Q and Picard debate man via the words of Shakespeare. I still can't believe that was actually aired. I could imagine someone today insisting that the audience wouldn't appreciate Shakespeare and cutting a scene like that. Watch this scene:

My favorite character overall was Worf. His role as a Klingon in Starfleet was interesting enough as is. The episodes where he explored different aspects of Klingon culture were fascinating. What I didn't remember though was just how damn funny his character was. There were multiple occasions where I laughed out loud and it was almost always after something he said. I know he has a role in DS9 and I'm hoping it continues to be as good as it was here. 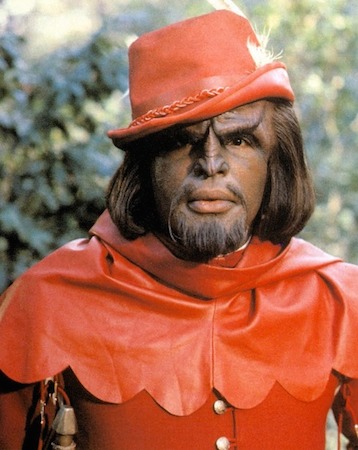 One thing I don't quite understand though is all the hatred for Wesley Crusher. I honestly couldn't remember him being annoying during my first watch of the show and I certainly didn't see what the big deal was during my re-watch. Was he a bit overeager? Sure. Would I have been in his shoes? Hell yeah. Maybe I'm giving him a pass since he is such a cool guy now, but honestly I found myself more jealous of him than annoyed. His final episode was a bit of a letdown - too mystical for me - but certainly not the worst episode of the series. 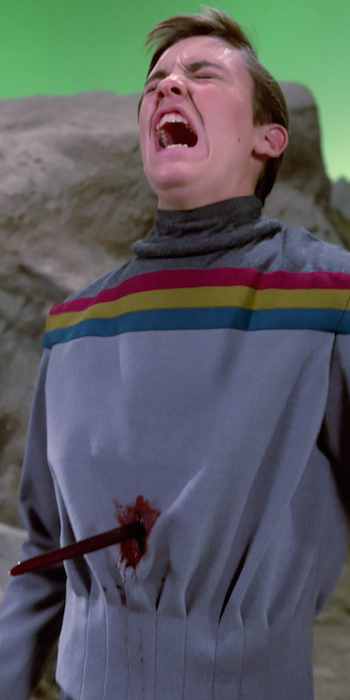 If there was one character I despised though it was Troi. I certainly get the idea of having a psychologist on board. Having an empath on the bridge seemed like a great idea. But every time she started talking about feelings I threw up a little bit on the inside. There is a great episode in Season 6 where another captain temporarily takes over the Enterprise. He berates Troi for not wearing a uniform and I noticed that from that moment on, she did. Of course the best moment was when she turned into a frog. Epic. The only redeeming part of her character was her mother, played by Majel Barrett, the wife of Gene Roddenberry. 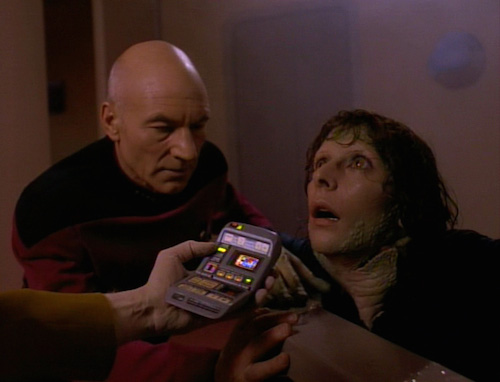 Another surprise was how fascinating the Romulans, Ferengi, and Cardassians were. The Borg was cool to see at first, but honestly, they aren't that interesting. I though the episodes involving Romulan politics were far more exciting than the Borg. I wish more time had been spent with the Cardassians, but if I remember right they are used a lot more in DS9.

During my rewatch I paid special attention to the technology of the show. Not necessarily the big things, like warp drive, but the smaller things. For example, there was one episode where a character opened a drawer by touching a button. My first reaction was that it was cool but completely impractical. Then it occurred to me that it would probably be great for people with arthritis. The really ubiquitous technology was tablets. There were scenes with characters using multiple tablets at a time. Scenes where characters would hand in reports by giving over a tablet. I could see that coming to pass actually. Think about USB thumb drives. Initially there were pricey, but now I've got a drawer full of them. Maybe in the future with infinite bandwidth and cloud storage, our tablets will be as cheap as thumb drives.

I've long had a deep love of Star Trek ships. All of them - both the good guys and bad guys. I love how there is a common theme (based on warp design) but still a great amount of variation. I've got both the "Ships of the Line" book (associate link below) but also the calendar. I'm not sure what my favorite is - but I've always had a fondness for the Excelsior class from the Federation. The Dreadnought from the last movie was beautiful as well.

While I'm not sure I'd call it my favorite, the most interesting and surprising episode of all seven seasons was the one immediately after the big Borg fight, where Picard is recovering from his conversion to Locutus. "Family" has a few different plot threads but seeing Picard deal with the ramifications of what happened to him - seeing him broken down - was probably the best acting I saw from him in the series.

Anyway, that's probably enough rambling for now. Tomorrow I watch the first episode of DS9. Unlike TNG, I only watched about a third of this series. It came out when I was in college and - well - I had a few other things on my mind at the time. Outside of the first episode I really don't remember much so I'm looking forward to getting to know it better.