While at iOS training a few weeks ago one of the instructors mentioned an OSX program called Dash. Dash is an offline documentation viewer, which sounds kinda boring, but I'm incredibly pleased with it.

Dash works by letting you download a doc set (over 130) to your local machine. The range of docs sets is pretty darn impressive, and even includes ColdFusion. 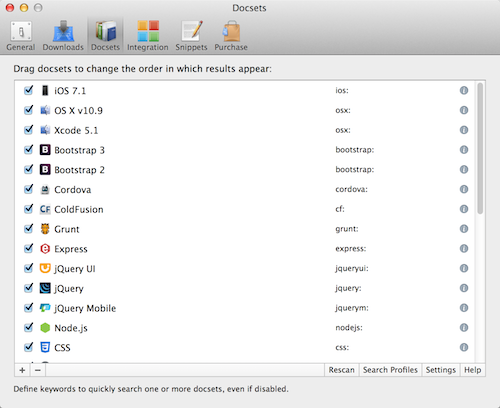 Once you've selected your doc sets, you know have access to them offline, which admittedly is probably not something you will have to worry about often, but what I love about this app is how quickly you can get to what you need - even when your online. Some of my favorite platforms don't necessarily have the quickest, simplest docs to browse and Dash just fixes that problem. 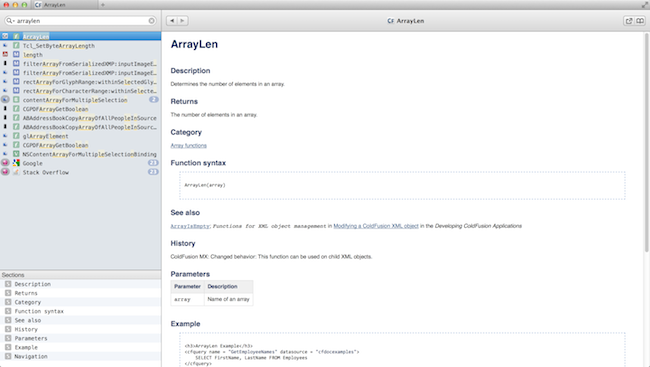 Dash also has great integration with other apps: 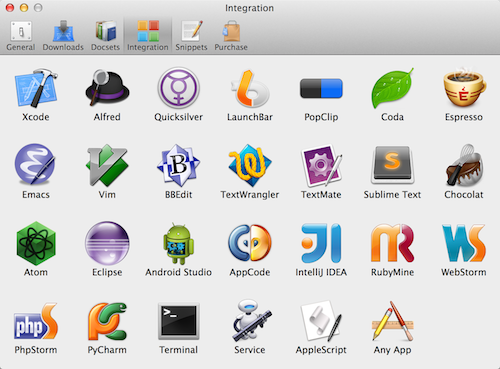 Of particular note is the Alfred integration. I can now fire up Alfred and search Dash directly, which is really freaking cool. Since Terminal access exists I'll also be able to build a Brackets plugin for Dash too.

The only issue I ran into is that sometimes the categories Dash uses (classes, functions, etc) don't necessarily map to the content in question. jQuery Mobile is a great example of this. It places the UI stuff (the widgets) under a Classes category which isn't exactly appropriate. But that's a minor quibble.

Dash can be downloaded for free, but it will nag you to purchase the commercial version. At 19.99, this was an easy purchase, but even the nagging was pretty minimal.

I love Dash! I've been using it for over a year now. It's really nice having docs for angular, ember, coldfusion, and ruby all with in single panel. The nagging isn't too bad, but it does get annoying when you switch between a lot of docsets. Other than that I have been incredibly pleased with how it works. They keep adding docsets and integrations in the last year docset coverage has doubled and integrations have been included for a lot of major editors. Also the docsets are updated very frequently. Well worth the 20 bucks to purchase or just deal with the nagging.

Nice app! There seems to be also an open source alternative for Windows/Linux called Zeal (http://zealdocs.org/) It is using the Dash documentation sets.
I am new to the ColdFusion world and this is just the tool I was missing. Thanks!

Nice .. thanks for the recommendation!!!