Before I start - a quick apology. I know that this particular topic has been covered before, but I'm having a heck of a time finding the article. I wanted to build a quick example for a friend anyway so I thought I'd share. In this example, I've got a HarpJS site with a list of articles. For fun I also added a main image for each article. Here is the data source.

Next I whipped up a quick index page to list my articles. Notice that I'm also including a thumbnail (via CSS) version of the image in the list as well. This is me being fancy - I hope you are impressed.

A screen shot - I didn't include the source of the CSS but the entire application is posted as an attachment to this entry. 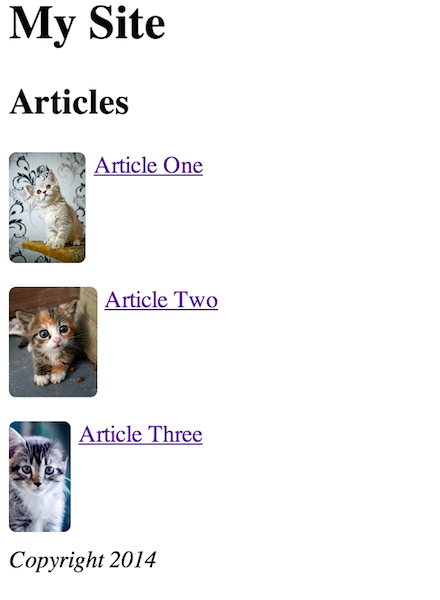 Ok, now lets talk Next/Previous links. I created three article files and pasted in some random text (thank you Cajun Ipsum). In order to simplify article display, I put a header and footer partial in each file. (Note - this is because HarpJS does not support nested layouts. There is a workaround for this that I'll show later.) Here is a sample article, minus some of the boilerplate text.

Don't worry about the article header. All it does is output the title and the image. The footer is where the magic is. For my example, I decided to always include text for previous and next links, but to simply disable the link when you were at the beginning or end of the list. It would take a few seconds to modify the code to not display anything instead in those situations. Here is my partial.

Not exactly rocket science, right? I simply get the keys from the data and see if I'm currently at the start or end. (Remember HarpJS supports passing data about where you are currently.) And that's it. Here is a screen shot from the first article as an example.

You can download the source for this demo below.

The other example I knew I had seen: https://github.com/sintaxi/...

Hi Raymond,
Thank you for writing this! I am new to HarpJs and this really helped me out (like all your other blog posts).

I just have a question, how would I be able to paginate my main articles page? So I can show say 5 blog posts per page and with a simple "next" and "previous" link to show 5 more blog posts? I am moving away from WP and this is something I would love to implement but now show how?! :-/ at the moment I just list all of my blog posts and it looks wrong.

Unfortunately, this is something that HarpJS does *not* provide out of the box. Harp requires a physical page for each URL, so if you wanted /page2.html, /page3.html, etc for your history, you would need to physically make those. Now -at that point it is trivial to write the logic to show the right page, but you still need physical files.

Jekyll does this out of the box and handles it well. (By the way, I don't mean that to say Harp is horrible and you should never use it, just that this is one place where it fails compared to other products.)