A few weeks ago I blogged about the Marvel API and how incredibly cool it was that Marvel would let developers play with their data. I built a demo (marvel.raymondcamden.com) with it but I was really curious to see what smarter folks would do. My friend Simon Mac Donald built something really cool.

I had never heard of it, but there is an Android app called Muzei that will automatically update your wallpaper with art work. Turns out it also has a plugin api. Simon was able to make use of some of the code from my demo and create a plugin for Muzei called Comic Cover Muzei. This means you can get random Marvel covers as your background.

When he told me about this I was a bit skeptical that it would work well. Covers are cool but I thought they may be too "busy" as a tablet wallpaper. But by default Muzei displays the artwork fuzzed out and dimmed. As an example: 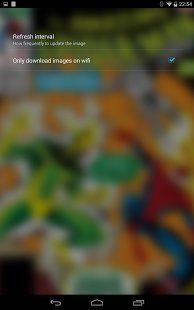 If it looks cool, you double click on the desktop and it comes into focus. 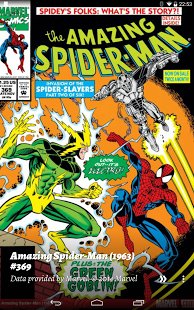 Check it out. Both Muzei and Simon's plugin are free. More details about how he built it may be found on his blog post.

Awesome! Now I can finally combine my love of comics with the passion of getting all of the Howard the Duck covers on my droid tablet! Seriously this is cool and I think I'll have to start a small project to pull in the cover images to my entire collection.

The API *would* let you search for comics about Howard the Duck. While I don't think you can search *covers* by the person on them, this would be close.

Is it not more embarrassing to mention that I remember the Howard the Duck comic, and the movie. Leave me to my shame. :)

Want more shame? I'm a fan of the Beyonder - even Secret Wars 2.

I like the Beyonder! Spider-man teaching him how to use the bathroom (Secret Wars 2) was awesome!

Thanks for promoting my plugin. It wouldn't even be an idea in the back of my head without your original blog post.

The Beyonder in Secret Wars was cool, in Secret Wars II not so much. It took away too much of the mystery by giving him gerrie curls and a white Michael Jackson'esque Thriller era suit.

When I get some more time I'm going to add options to select covers by character or series. Also, there is nothing embarrassing about Howard the Duck comics by Steve Gerber. The movie on the other wing...