One of the cooler features of Brackets is Live Preview. Live Preview allows you to edit CSS and HTML and see updates in real time via your browser. This is incredibly powerful and is the first feature I show off when demonstrating Brackets, but it is also one I don't actually use very often. Why? I don't do a lot of CSS. Typically if I need something to look pretty I just drop in a UI framework and not worry about it. Yesterday though I needed to do a bit of design (yes, I design, honest!) so I fired up Live Preview and worked on a simple HTML page.

When I was done with the design aspect, I switched over to writing the JavaScript I would need. One issue with Live Preview is that it will not open with Dev Tools open in the browser. I live and die by my Dev Tools and as I had finished the design portion, I figured it was no big deal. As soon as I opened Dev Tools, I got the warning about the connection in Brackets:

No big deal. I knew this was going to happen. But on a whim - I tried something. When you start Live Connect, Brackets fires up a HTTP server and pops open a Chrome instance with your app in it. In my case, it was http://127.0.0.1:56738/index.html. I wondered if that server was still running. I reloaded the page and... it worked!

Ok, that may not seem like a big deal, but I tend to use the heck out of httpster to quickly fire up a web server for a directory. I was preparing to switch to Terminal and do that - but now I realize I don't have to. Even when I don't need to worry about design, I'm going to use Live Preview when I need to run a web server for the code I'm writing. (I do have a web server installed of course, but I'll often work outside of it for small projects, articles, etc.)

It would be cool if Brackets had a UI just to fire up the HTTP server and not worry about Live Preview at all. By the way, in case you're curious, this is what happens when I do design. 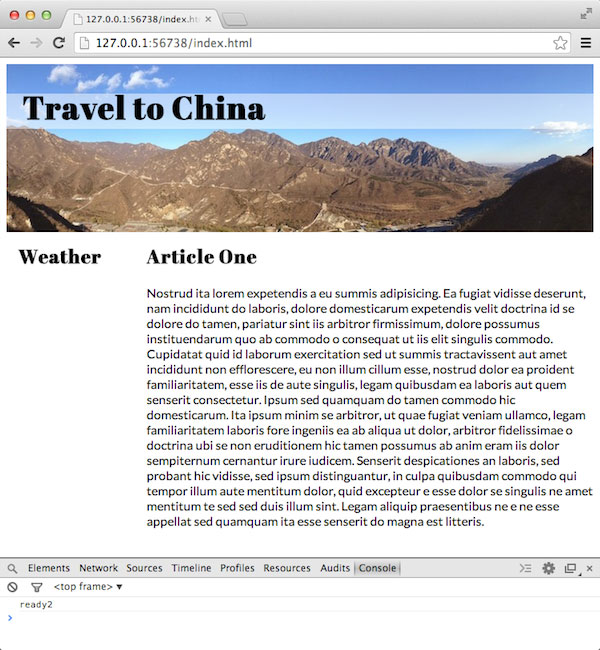 As just an FYI, just use this: https://github.com/sbruchma...

Wow, thanks for sharing! I like to see immediate changes to what I'm editing so I'll have to keep this in mind when I start using Live Preview.

I have a problem with this feature , it was worked well , but now when i but the courser on a

for example , or on a <div>, it won't be highlighted in the browser ,
What can i do to fix this problem ?

Sorry - I don't use Brackets anymore. I'd suggest posting this issue to the forums Adobe has set up for Brackets.

Design is ok, Not that good.

Are you using something else in its place? Would like to get your final thoughts on why you gave up on brackets?

There is a link to Brackets in the first paragraph.