Technically what I'm reviewing today is EPIC SPELL WARS OF THE BATTLE WIZARDS: DUEL AT MT. SKULLZFYRE (and yes, the caps are required), but Epic Spell Wars is somewhat shorter and easier to remember.

Growing up, I was exposed to some pretty cool board games (I remember Axis and Allies as well as at least one Avalon Hill war game), but it is something I had not really had the time to play with since then. Now that my kids are finally old enough to enjoy more complex games, I've begun picking up various different games to try out. I've had better luck with the games that are more card based than board games, so I've got a slight preference for those, but in general, I'm really enjoying this new hobby.

Today I want to talk about Epic Sell Wars. I was introduced to this before NCDevCon by Jason Dean. Over the weekend of the conference I ended up playing this game for probably close to six hours. It has a great play system that is simple enough to pick up in a few minutes. It's also somewhat simple to set up piece-wise. As an example, here is the complete game laid out: 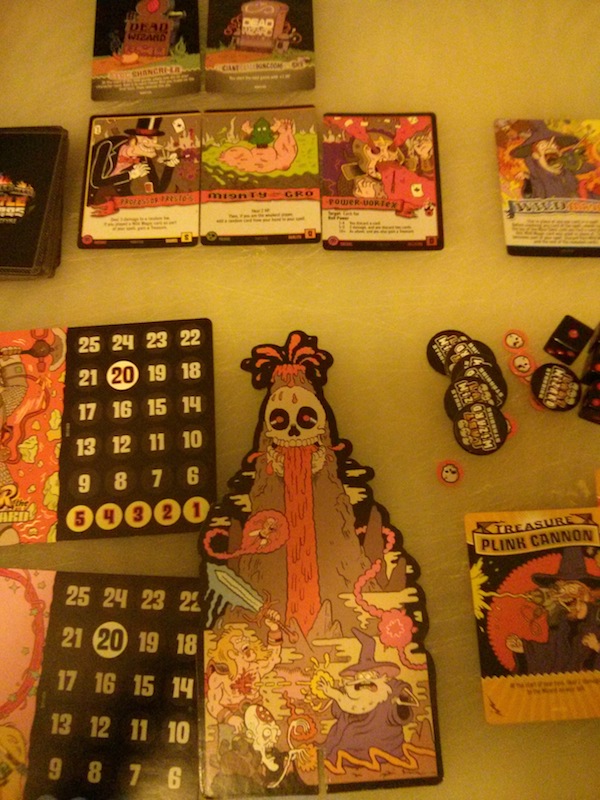 Everything fits into a small box that can easily be stuffed into your carry on (especially if you are like me and have a laptop bag heavier than your carry on) and as I said, setup is done in a few minutes. The core mechanics of the game revolves around wizard duels. You are a wizard. You want to kill the other wizards. That's it. In some ways you may be reminded of Magic, but unlike Magic, this game is 100% complete as is. You don't have to worry about spending a few thousand dollars on decks or managing your own deck outside of the game.

Wizard selection is simply picking a game representing the character you want to play. As everyone has the same amount of HP, it doesn't really matter. But right away you can see the silly nature of the game. 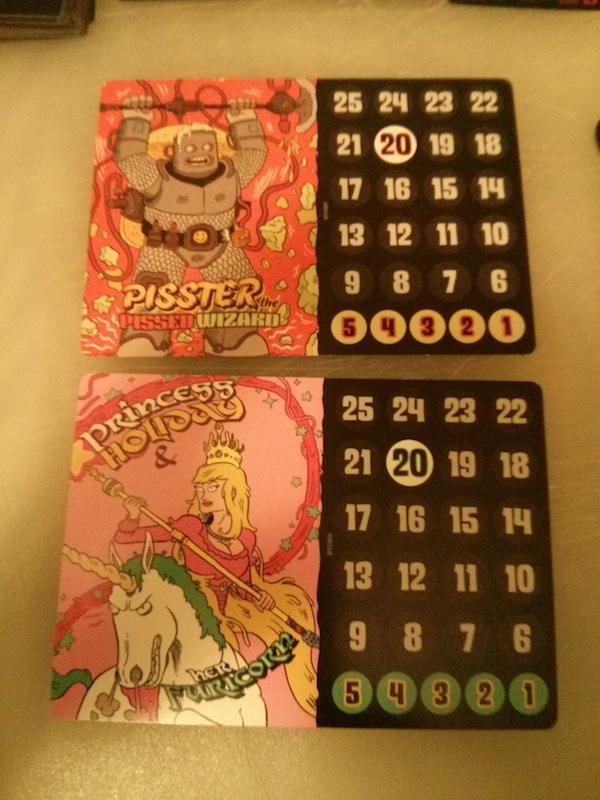 Gameplay revolves around the creation of spells. For the most part, every spell is an attack spell, but there are healing variations as well. Spell crafting is insanely fun. You have three components to a spell, a source, quality, and a delivery. This is clearly marked on your cards: 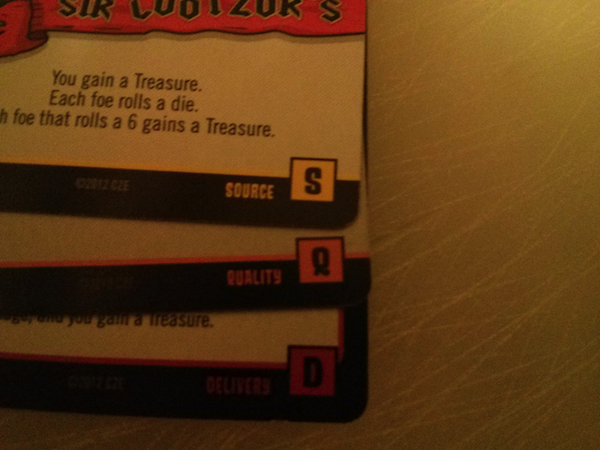 You craft a combination of cards that makes use of up to one each of those types. How you mix your spells together and how many components you use is part of the strategy. How a spell is crafted determines how quickly you will attack and could mean the difference between life and death.

Along with strategy, spell crafting is freaking hilarious. Here are two examples to give you an idea of what I'm talking about: 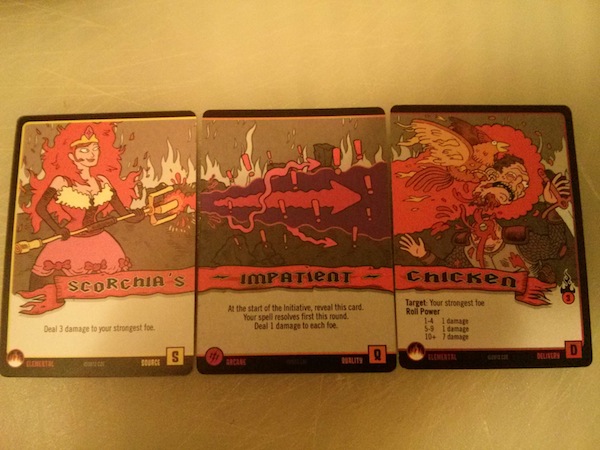 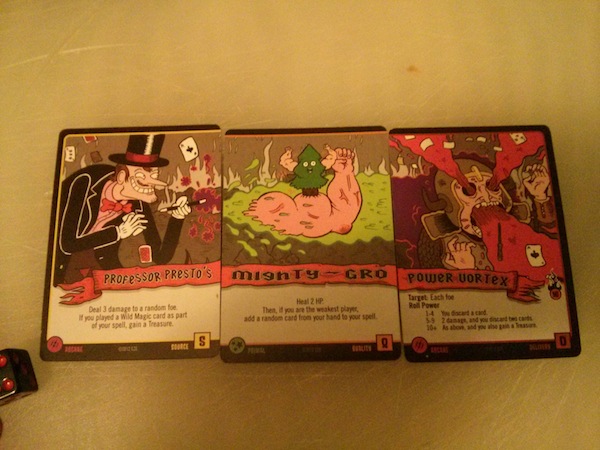 As you can see, this isn't a game that takes itself too seriously, which just makes it all the more fun. In fact, this is one of the few games where I was excited to see my enemies play not just because I was worried about surviving, but because it was just plain fun. I think that's a huge win for the game right there.

Another example of this is that when you die, the game doesn't end for you. Upon your untimely demise, you immediately get a "Dead Wizard" card. This card gives you a bonus (most of the time) for the next game. In fact, on every round where you are dead and the other players are slugging it out, you get another bonus. During my many hours of playing with my friends at NCDevCon I spent quite a bit of time dead (I suck) and I was totally OK with that. 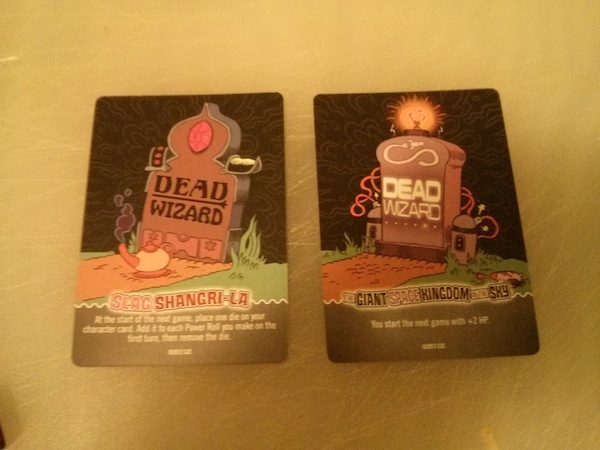 This is a great game. If I had to include one warning, I'd say that it may be a bit inappropriate for young kids. There is some gore in the cards, but as you can tell by the pictures above it isn't anything realistic. There is also a bit of mature content in the game. As an example, here is a shot of some treasure cards (another mechanic to the game): 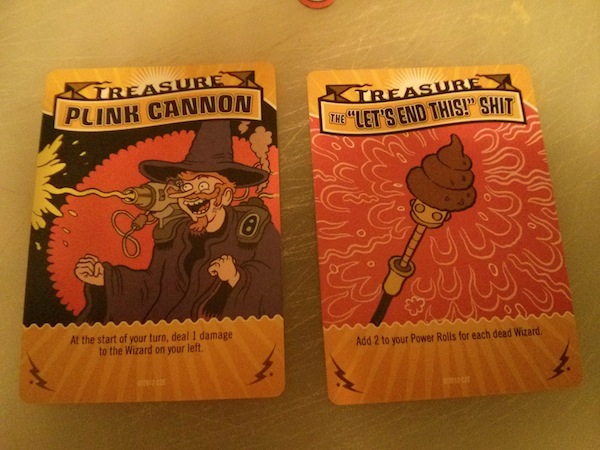 Speaking for myself, I'm not that concerned about my kids seeing a wand with a bit of poo on it. There is one other card that has something slightly sexual on it. I was considering just removing it from the deck, but honestly I don't think my younger boy will understand it and my older boy will giggle and that will be the end of it. The game markets itself as being for 15 and older, but I feel comfortable with my 11 year old playing. Obviously you need to make that decision yourself. (And hey, at least it isn't GTAV.)

Now for the bad news. Actually getting this game may be somewhat difficult. (And as I get into games more I'm discovering this is a 'thing' with this hobby.) I can't include an Amazon link as it isn't even listed, and if you follow the link up top to the manufacturer's page, you can't buy it there either. The best I can suggest is to hit up your local comic book shop and see if you can find it there.

Finally, big thanks to Jason Dean for the pictures, although if you play against him you should make it your number one priority to kill him the quickest!

Great review. It is a fun game, glad I thought to bring it with to NCDevCon. It will also be making an appearance at CFSummit in Vegas in October. It supports up to 6 players.

I've emailed Cryptozoic to see if it is out-of-print or if they will be printing more in the future. I'll post an update when I hear back.

One minor correction. The first photo is not really the layout of the game as it is played on the table, it is just a picture of all the different types of components in one photo.

Jason - good point there. Thanks for the correction.

So I just heard back from Cryptozoic. The game is now available from their store http://store.cryptozoic.com...

It is in very limited supply until their next print run, which they said was near the end of the year.

So, if anyone wants it, go get it now.

Your blog seems to strip underscores out of URLs.

Here is a bitly link to the store: http://bit.ly/19qmECB

Cool - thanks for the update. Sorry about the URL issue. I'll fix it... one day.

I know I'm late the game here but I'm curious Ray have you ever tried Munchkin the card game?

Yep, and I love it. Simple, fun, irreverent.