I don't remember the first time I watched Dr. Who, but I have many fond memories of watching it as a young child. I would set up our VCR to record the show (it aired way late on Sunday night on PBS) and watch the episode Monday morning. I can remember hoping I'd have enough time before I left for school. 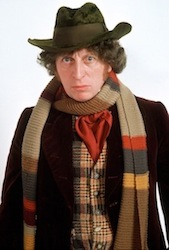 My first Doctor was Tom Baker. No matter how much I may enjoy the other Doctors, I always end up comparing them to my first. I can't even remember complete episodes from that time - just flashes here and there of various villains and companions. To this day, my favorite RPG character name is Romana. For some reason that name just stuck in my head.

I was excited to see the relaunch of the series of a few years ago. It felt like a great continuation of the old series. A bit darker, yes, but not overwhelmingly so. I love the new BSG, but it's hard to find anything silly or light in that series. The new Dr. Who has a dark tinge, but maintains the light hearted nature I remember from my youth.

Even better, my eldest son has latched on to Who. I had hoped he would be a Star Wars nerd like his old man, but I'm perfectly fine (and frankly excited) to see him find his own place in the Geek realm. During the live announcement today he was practically jumping off his seat. When the moment arrived, he gripped my arm as if he were about to hear the most important thing in his life.

So we have a new Doctor - Peter Capaldi. Personally, I'm happy to see someone a bit older in the role. I've enjoyed all the modern Doctors but felt like they were getting a bit too young. I'm excited to see where Capldi takes this role and wish him the best.

Take a closer look at his work on http://en.wikipedia.org/wik...
It's a great choice! Hopefully, he'll be able to return some of the qualities the older Doctors had.

I think I got into DW somewhere around 1981, with Tom Baker also being my first and favorite Doctor. Same as you, I caught the old PBS reruns late at night on the weekends, but soon discovered they would also air an episode each day around the time I got home from school. So in a short amount of time I was able to watch every episode from the beginning of John Pertwee through the end of Peter Davidson.

I've only gotten back into DW in the last couple of years or so, but I'm really looking forward to what Peter Capaldi will bring, I'm ready for an older Doctor again. David Tennant was great, but Matt Smith has been just a little to goofy for me.

My first Doctor was Tom Baker as well. I usually only got to see Doctor Who about once a year when we'd take a trip to the states. We always seemed to catch the Doctor Who marathon during the PBS pledge drive. I'd stay up all night watching episodes and sleep in the car the next day. I'll never forget the nights I spent with the volume turned down so low so I wouldn't wake my parents enjoying the adventures of the Doctor, K-9 and Romana.