Summary: My initial impression was very confusing, frustrating, but after some hiccups I'm pretty damn excited. Read on for more details.

Earlier today I was happy to get my Leap Motion unit. I ordered my unit on July 22nd and was supposed to get an email when it shipped but I never did. Maybe it ended up in my spam folder by mistake, either way, I'm just happy it showed up.

I ripped the box open (ok, I carefully opened the box) and plugged it in. I went over to leapmotion.com/setup to grab the installer bits and here's where I made my first mistake. For some reason Chrome decided to lock up at the moment I plugged in the Leap. I can't imagine why - but it beachballed on me at the exact same time. I switched to Firefox and downloaded the bits there. (To be clear, that wasn't a mistake - and as an aside - I love how Firefox has a download indicator right in the icon in the dock. Looked pretty slick.) I returned to Chrome to wait for the download to wrap. Once the download was done, I ran the installer. At the end of the installer, all of a sudden my desktop went black as an app took over.

Now - I know I'm probably in the minority here - but I freaking despise apps that take focus and especially ones that go full screen. Maybe I was supposed to stop everything while the installer was working, but I'm one of those silly people who actually like to use a computer that can do more than one thing at once. 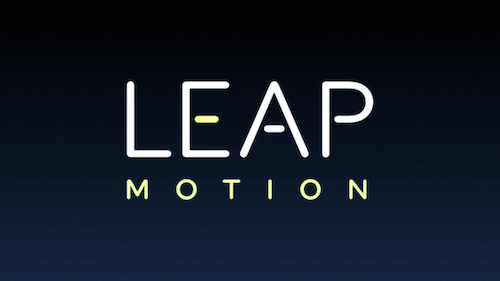 So - I've got the Leap Motion doing something and playing vaguely New Age music while my SiriusXM is blearing classical at the same time. I can't app switch (again, why should one app decide it is more important is beyond me) nor do I have any idea how to actually end this application if I needed to. Anyway, this is the first thing I see after the giant logo: 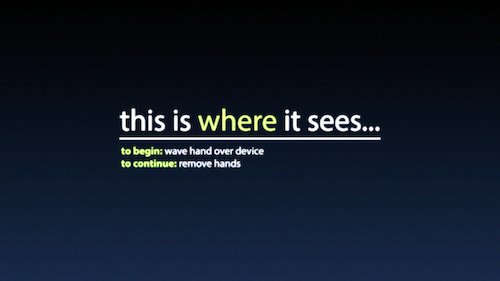 Woot! So I have two choices. I can begin, or I can continue. Um. Ummmm. Begin? 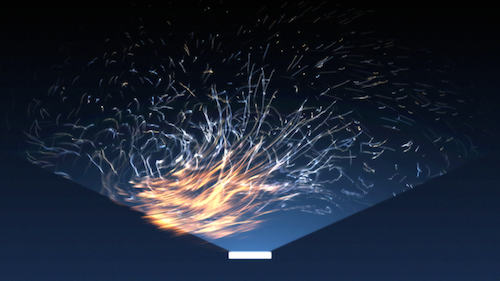 So yeah... at this point I just start spastically waving my hands. There's no directions here - all you see is what you see above. The "gold" is my hands. I guess it was obvious I should immediately start just moving my hands around, but it was not obvious to me.

Eventually I figure out that this orientation is supposed to show three different aspects - the view port, the viewing area, and the level of detail. The third one I didn't actually get to the first few times I ran the program because - well - I didn't even even realize it existed. Maybe if the app had some type of additional direction/help/anything it would have been clear. Once I did get to the third part though it was freaking cool. 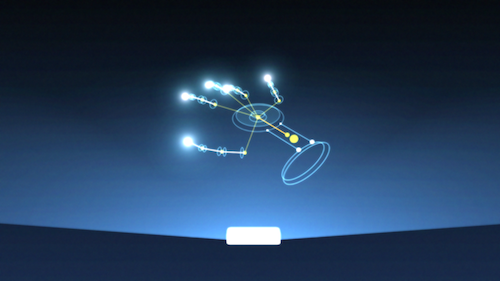 By the way - that was the exact moment I felt like Iron Man. (Again though - this was later in the day - not initially.)

So I go to the Airspace app. This is basically a local listing of Leap Motion-compatible applications. First application I try is Lotus. After a minute I figured out I was supposed to poke the eye to start. Then... I get a hand doohicky and I don't know what to do. No direction. No suggestions. No hints. Zip. I give up. A few hours later I kinda figure out I can run 4 different sub-demos - and one is kinda cool - but again I have no idea how to do anything. So maybe the fun is in figuring that out. I can dig that. But for the first app I tried it was frustrating.

Then I tried Dropchord. It looked cool. Nope, didn't work. I got this: 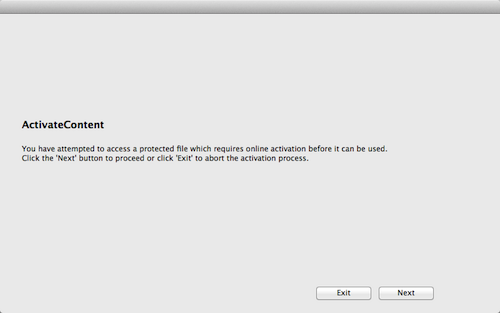 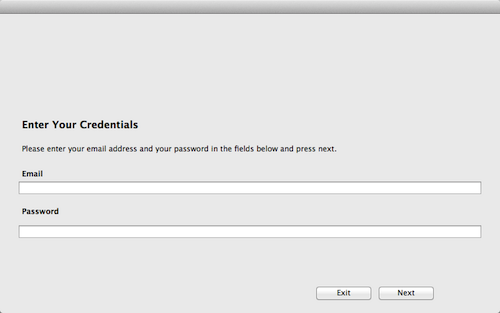 Hmm. Well, when I first connected to Leap Motion I had to create an account. So obviously that is it. Let me try that. 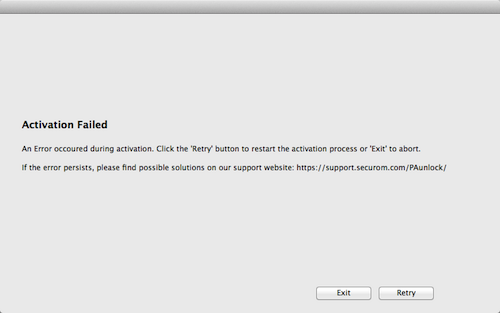 Erp. Um, well, let me check out Leap Motion support. To be fair, this isn't a Leap Motion app (actually, I have no way of knowing that, but they shipped it, so...). I see a form and try searching for dropchord.

I type in dropchord and get...

Um... that. Ok. So I click around a bit more and discover an ergonomic section. I see this picture:

Notice the Leap is in front of the keyboard. I then realize - nowhere was I shown where to actually put it. I double check the box - nothing. No suggestions at all.

Now to be fair - this is where I had screwed up a bit. If you remember, I had switched to Firefox to do the download. As soon as I began the download I stopped paying attention. Turns out there was a video on the page after you started the download. A helpful video. -sigh- You can see it for yourself here: https://www.leapmotion.com/thanks. Maybe they should have that under support as well?

I then went back to the apps and tried Cut the Rope. Same. Damn. Thing.

At this point I took a deep breath (ranted a bit on Facebook, but don't tell anyone) and had lunch. When I came back I decided to try the apps again, this time though I was off of my corporate VPN. Guess what? It worked.

All in all... very frustrating start. But I've tried a few more apps. I'm not quite sure I'll actually buy anything yet, but some of what I've tried is kinda cool.

All in all - so far - I think this thing has potential. I think what I'm going to find - and probably most people - is that there are probably limited uses for this for now. But the potential is incredible. I think - given time - this could become one of coolest accessories for your laptop.

Of course - there's a JavaScript API. Here's an example of it by Mozilla Evangelist Christian Heilmann: Playing with Leap Motion for Accessibility. You can also find GitHub projects related to Leap already: https://github.com/aphex/leap-cursor-library.js

For my first hack I think I'm going to hook up some motion handling for Reveal presentations. I can't wait to write it!

Leap Motion allows you to dispense with the keyboard when its not needed?

No. In theory you could use a virtual keyboard I suppose? I don't think the control would be that good though. It would certainly slow you down. Maybe v2.

Actually using the Leap Motion to control Reveal sounds like a great idea.

Over on Facebook Christian Heilmann mentioned someone has done it for deck.js. I tried it - and while it was a bit awkward, it was pretty cool.

What happens if you put random stuff over it and wave it around?

Like an open pair of scissors, does that work like 2 fingers? Or a baseball, will it pick that up as a closed fist?

Or is it clever enough to tell what's a hand and what's not?

there are many videos on youtube, including an interaction with Google Earth.

Pete: It kinda got confused. It definitely seems to assume a 'hand' is there and the visualizer app saw the pen I was holding as a finger, but one that was somewhat disjointed.

Looks like I'm too late (to do a Reveal.js plugin):

I'm going to write it anyway though just as a reason to learn the LP api.