It's been a while since I reviewed a video game on this blog so I thought I'd use today to catch you guys up with what I've been playing the last few months. As always, comments are welcome.

I reviewed Dead Island nearly two years ago, and it is stands out as my favorite zombie game ever. I had high hopes for this update but was rather disappointed to discover that it was nothing more than a packaged up DLC. Turns out other reviewers noted the same thing. It certainly starts off like a sequel - pretty much picking up mere minutes after the finish of the previous game - but the actual gameplay is nearly identical to the previous game. That bugged me at first, but, honestly, I let go of that and just tried to enjoy myself. I remembered how frightening some of the situations could be in the original and the same applied here. I remember how fun it was to attack zombies and the same applied here. As I've said, I'm not a gore person, but there is something just plan fun about taking a katana to a zombie.

I've finished this game, and I enjoyed it, but I'd definitely not pick it up while it is still full priced. (I just checked my Amazon link and I see it is 30 dollars now. To me, that's on the edge. If you really enjoyed the first game than go ahead and jump.)

By the way - I wonder if I'm the only one who encountered the "ship bug". I had been playing for roughly five minutes when a wave pushed me into a room with no exits. I can't remember the last time I saw a bug like that in a video game. 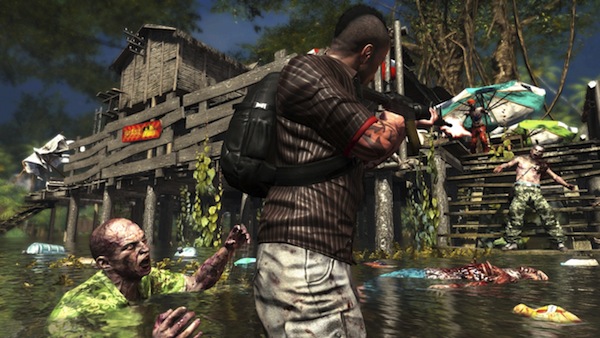 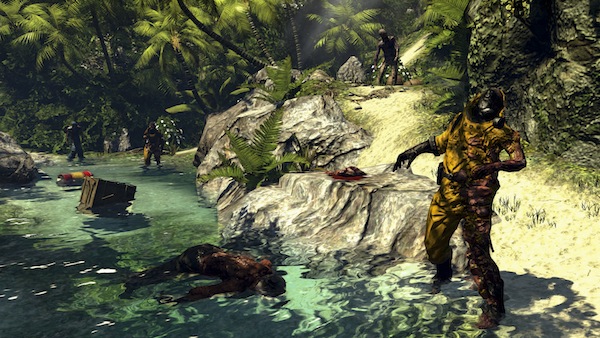 I'm really torn about this one. Let me start by saying that I'm only about 20% through this game and - obviously - my opinion may change by the end. I went into this game with low expectations. The reviews were not good. But - I love the Aliens franchise. I've watched every movie, and while the quality goes downhill rather quickly in 3 and 4, I still will watch them and enjoy parts of them. I can remember watching Alien when I was too young, and since that time they have continued to scare the crap out of me.

My thoughts going into this game were simple - as long as the game was barely decent, let's say "C" level, then being in the Aliens mythos would be enough for me. Did that work out?

Well, the first thing you notice when playing is how horrible the graphics are. I mean - my god. The graphics are so bad you almost want to congratulate the developers. They had to work hard to ship a game with an engine that looks - I kid you not - like a 10 year old game. Way back in 2011 I reviewed Homefront. This was another game with a bad graphics engine. But to me - the story and other aspects more than made up for it. Let me be clear. Aliens:CM makes Homefront look like freaking Crysis. As others have noted - many screenshots of the game were released before the game and not one of them come close to the actual final product. Here is a great image which just about sums it up. (Credit: http://furiousfanboys.com/2013/02/aliens-colonial-marines-summed-up-in-one-image/) 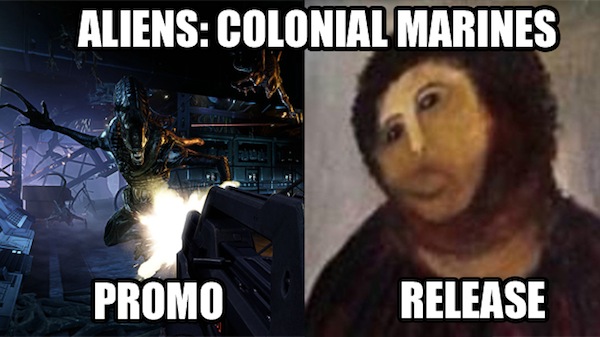 Then there's the controller. I can pretty much deal with any controller setup, but something about this game's design just doesn't work out well for me. Mainly it is the melee attack. I accidentally trigger it in just about every encounter I have. I've died multiple times when I swung my weapon instead of actually firing it.

Oh - and then there's the difficulty. I can generally play more FPS games at medium level. Not this one. With large gaps between checkpoints I had to 'give up' a game I was 2 hours in and restart back at the beginning on the lowest difficulty level. It is insanely hard and unforgiving.

Let me give you an example. You're on a ledge walking along a wall when you see a xenomorph headed your way. You're using a shotgun so you know you need to wait till it is practically kissing you before you can pull the trigger. You watch as it races towards you when 30 feet away the fricker decides to stop walking on the ledge and crawl - like a bug - under the damn thing. That - is - freaky. You panic. You start jumping around looking in every direction. You know that if it sneaks up behind you and gets one hit in you're probably dead. (Which - while frustrating - is probably more realistic.) Sure, you can find Youtube videos of the enemy AI doing stupid things, but when it works, it works very well in terms of ramping up the suspense levels.

Overall the game is somewhat of a failure - but I'm going to finish it.

I have a weird relationship with fighting games. I enjoy them - but only for a short time. Mostly it is due to the fact that my memory is crap. I can never remember than 10+ button combinations for various moves. My fighting strategy then comes down to lucky button mashing combos and just going crazy. I dig that - but it doesn't make for a very deep experience.

So far I'm having a hell of a fun time with Injustice. If you forget for a moment that Batman could stand a chance against Superman and just go with the whole willful suspension of belief thing - it is incredibly fun. The most fun - of course - are the super moves. These are 15-second long attacks that are so over the top they don't even make sense. For example, check out the Joker's.

My son and I both died laughing watching this. I had to pause the game. Not every one works well, but when it does, it stands up to multiple viewings even.

I'm currently about 80% through with the story and I really dig it. The game gives you a good reason for super heroes to be fighting each other. (I'll point out that the comic series made for the game is damn good. Very surprising for a game time-in.)

Out of all three games I've mentioned in this blog entry, this is the one I'd recommend the most.

It's a shame that the Aliens game turned out so terribly, because it was supposed to be a continuation of the second movie (one of my favorites) and because an acquaintance of mine put a ton of work into the 3D models of the rooms for the cinematic trailer (just like the rest of the game, the levels can't hold a candle to the models he built).

I feel the same about fighting games in general. One note of correction though, in the comics Batman does defeat Superman. Being the dark and distrusting type, he stored away some kryptonite for just this purpose.

If I remember right, he had files/plans/etc for *every* metahuman in case they turned bad.

With AC:CM check your graphic settings. You may want to turn off the god-awfull "film grain" effect. I've got the PC version but hopefully you can change this on 360 as well.

Next time I play I'll check to see if it is there.

Peter, I played more AC:CM today and forgot to check that setting.

That being said - I'm liking the game more and more. The sewer level was *incredibly* scary/nerve wracking/etc.

The scene with the Queen was also damn well done.