Over the weekend I was working on a small project and needed a copy of jQuery. I try to avoid the CDN as I find myself at airports without wifi access sometimes so I did what I normally do:

That's what I always do - but it kinda bugs me. I had heard of a tool called Bower that I thought might help. It's a package manager for the web. In theory, it would do what I wanted. I went to the command line, installed it via npm (have I said before how much npm rocks?), and then fetched a copy of jQuery like so: bower install jquery.

This worked - and it was epic cool - until I realized how much it grabbed... 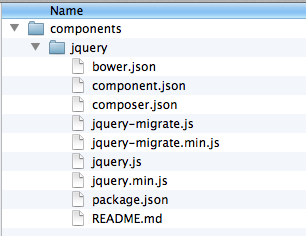 Ugh. Don't get me wrong - this was still quicker then my old process. And I "get" the idea behind the metadata involved here and why it would be useful in the future. Bower is pretty damn powerful and I definitely recommend folks take a look at it.

But what if you just want a copy of the library, one time, and that's it?

I decided to whip up a quick Brackets extension as a proof of concept. Clicking the "Run JSDownloader" menu option opens up a dialog of options: 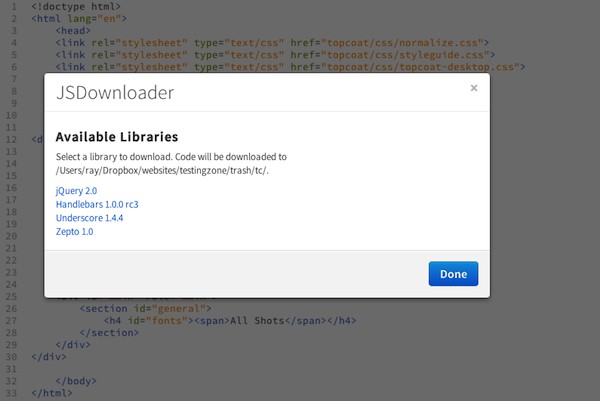 Clicking the library fires off a process to download it: 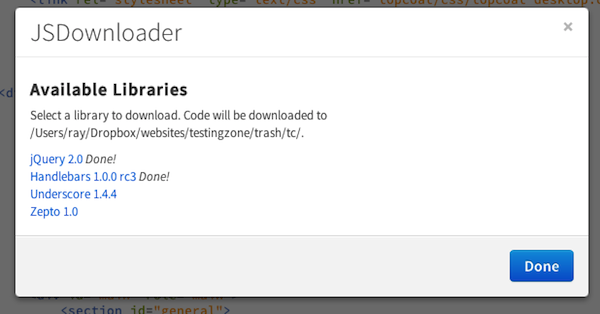 And yeah... that's it. Simple, direct, exactly what I need. There's a few caveats though.

Right now it only supports "single file" downloads. I've got basic architecture in there to support a list of files, but it isn't complete. The idea is that if you provide a list of files, it will create a subdirectory based on the name of the library (as in: currentdir/jqueryui/) and then copy the resources there. But this isn't complete yet because...

The second issue is that Brackets still doesn't support binary file writes in extensions. In theory I could do so if I hook up a Node module to my extension, but... honestly it feels like a bit much. I'd rather just wait a bit and hope for support in a future sprint.

Finally, there is no support in Brackets yet for refreshing the project view. So while the extension certainly works, you need to do a reload to see the files show up.

So - where did that last of four projects come from? This is kinda cool I think. In order to "drive" the data list, my extension reads from a simple JSON packet. Here's how it looks now:

While this file is in the extension itself, my code reads the GitHub version of it instead:

This means folks could add a new library by just committing to my GitHub repo. I don't have a nice UI to refresh the cache, but if folks end up using and contributing to this extension, I'll add it.

You can try out my nj/manual-refresh branch--it adds a function in ProjectManager you can call to refresh the file tree. https://github.com/adobe/br... (you could make your extension just see if that function is defined, and if so call it).

Also, writing a node extension isn't that bad :)--there's some boilerplate you have to use to set up the connection which we should really factor out, but once you understand how that works and the standard function signature for async calls, it's pretty easy.

I've done Node w/ Brackets (http://www.raymondcamden.co..., and it isn't bad at all, just a bit more work then I want to do for this. If people *really* dig this extension and ask for it, I would, otherwise, I'll wait for binary support to be added.

I may have to reconsider my direct link: