Back in October of last year I wrote a guide to integrating PhoneGap, Parse, and push notifications. Recently a reader noticed that my guide no longer worked and asked me to dig into it. I did today and have found the root of the issue.

I began by creating a new PhoneGap 2.5.0 project at the command line and adding in the Android platform. I then followed the directions from my blog post. Since I wasn't testing intents, just notifications, I only followed about half of the guide. Basically the portions where I updated AndroidManifest.xml and the Java source.

I deployed this to my Android device, went to the Parse dashboard, and sent a push. As my reader noted, the push did not show up. I began my investigation by looking at the Data Browser. Part of the Data Browser is a grid of "Installation" objects. These are all the people who have installed your app. It also includes a channels array that signifies what push channels, if any, the device is subscribed to.

Notice that every single device is subscribed to "", which represents the broadcast channel. I.e., everyone should get it. On a whim, I decided to try subscribing to a channel called foo. You can see it in the list above. I did this by simply adding one additional line of Java code:

I then went to the Parse dashboard and tweaked "Send to" to specify a segment.

Notice that foo shows up. That's cool. It meant my Java code was definitely working, and Parse recognized that foo was a possible channel. I selected foo, entered some text, hit send, and...

I then wondered - what would have happened if I had selected "Broadcast" in the drop down? I did... and it worked!

From what I can tell, something about Parse's dashboard has changed. The default option to send to everyone wasn't the same as sending to the Broadcast channel, but it was in the past. Here's a visual representation of my tests. 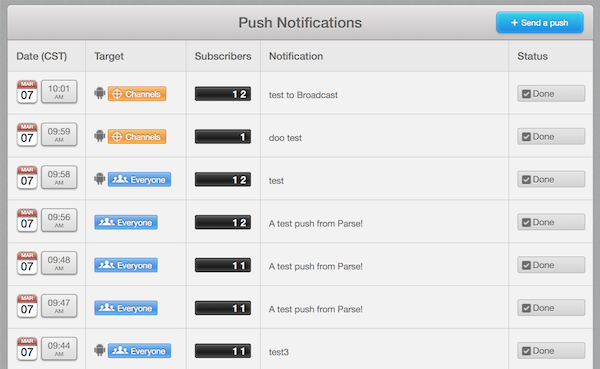 So as far as I know, everything still works just the same as before, it is just the dashboard that has changed in terms of how you test. I'm going to post to Parse's forums about this to see what the specific difference is and if I get an answer, I'll post a link to it in the comments below.

The previous version of the push composer defaulted to the Broadcast channel, "". The new Push Console defaults to "Everyone", which would be all Installation objects, regardless of which channels they've been subscribed to.

When you subscribe to push notifications in Android, you specify an Activity which should be launched based on the channel being targeted. From your example:

These lines tell Parse to launch testpush2.class when a push notification is sent to either the Broadcast channel, or to the "foo" channel.

Since "Everyone" is not using a channel, there is no Activity associated with it, and you'd see a message indicating so in Logcat.

You can define a default activity to be launched by default whenever if the incoming push notification is not sent to a specific channel, or the channel has no associated activities:

Now, any push notifications sent to "Everyone", or any channel other than "" or "foo", will be associated with the testpush3.class Activity.

Dude, awesome, that makes perfect sense. Thank you for responding in all of - what - 5 minutes? :)

Thank you again Raymond...now it works like a charm!
Please keep up the good work!!!

Still to me does not work,

I source code is:

Can you please describe *how* it isn't working? Is your device being subscribed, ie, you see it in the dashboard?

If you register with parse.com but do not get anything on the phone.

I tried to send it to all the channel i like you suggested in this article, but neither test has worked.

Can you answer my earlier question - if you see the subscription in the dashboard?

Yes, I can see the subscription in the dashboard

Then you got me. If you want to share your code with me, I'll take a look. I'll consider it NDA. Just email it to raymondcamden@gmail dot com.

Which template Do use you for the app?

What do you mean, biapar?

hi ray,
thanks for your tutorial, its working!!
but, how can i send it to specific user?
like uuid or some ID that i created before.
please tell me how

can i setchannel inside phonegap app?

Um, well, my understanding is that your app sets what it subscribes too. See my earlier post on Parse/Push.

Thanks for the reply Ray. I've tried running your example, but when the user takes action on the notification, a black screen appears for a few seconds and the activity is reloaded. Any idea?, this is my code:

Sorry for the delay in responding. Note - in the future - please do not paste large blocks of code here. Use a pastebin or gist link instead. As I'm almost two months late responding, were you able to get around it?

Hi Raymond,
I used your code to open my phonegap app (cordova 2.9.0) via a Parse Push notification msg. It works great! However, a new instance of the activity is created each time a Notification is clicked and as a result i get multiple instances opened at the same time. Do u have any idea of how i could kill the running activity so as to have only one activity running?

So are you saying you would see 2+ instances in the open apps listing?