This one is weird. I don't mean kinda weird. I mean bat-crap insane what-the-hell type weird. Earlier today Jeremy Tan sent me some code that acted a bit odd. Let's take a look at it.

In the code snippet above, you can see some data being passed to a CFC within a transaction. Note - there are no actual database calls here, but that doesn't matter. The CFC is simply doing a dump of the Arguments scope:

Now let's look at the output. There should be 6 dumps from the set() call and one in the middle for test2.

Things get weirder if we simplify. I commented out everything but the last two calls: 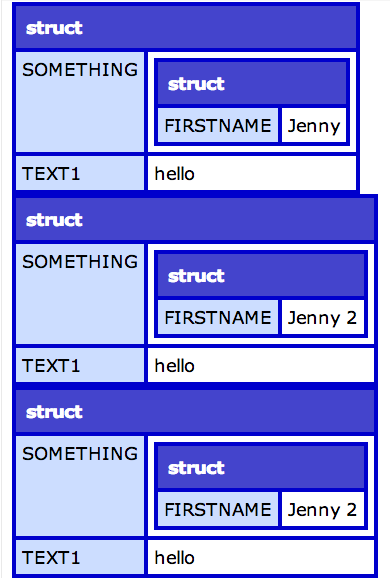 Yep, three dumps. Here is where things get even more weird. Jeremy found that if he simply stopped using named arguments and switched to ordered ones, everything worked fine.

If there was a bug with the data being displayed (oh wait, there is that too), then I'd maybe think it made sense. Again, as a bug. But the additional calls just don't make sense at all.

Obviously this is could be really bad for anyone doing CFC calls inside a transaction. You can find Jeremy's forum post on the topic here: Weird transaction issue with implicit struct (and possible array). I've also asked him to fill out a bug report and post the link here.

Well done Jeremy. Wish I had know this a few days ago.

Did you actually run into this too?

i have been struggling with this for a while now. Good to know that I am not the only one.

Wow, ok. Well, glad he found it and I'm glad I'm helping spread the word then. ;)

David - thanks for posting the bug link.

I added a note to the bug saying it happens in 10 as well.

The repro case can be pared back much further than this:

Blimey. And it's not just a transaction{} thing, it seems it's ANY block-level construct. This also does it:

Damn. Adam, please be sure to add a note to the bug report. This is pretty darn big. Does if{} also have the bug?

A question, does this just happen with script based code or with the more traditional tag based stuff?

What did you see when you tried it Larry? ;)

I'll have to try it this evening. These people here actually expect me to work. The nerve!

Wow! This is fascinating. Has anyone checked CF<10 or Railo?

Yeah - Larry. Back to work. Why would you be using tags anyways? :)

Seriously - this a pretty big issue. I wonder if I have hit this before and just thought it was me!