This weekend I began work on a CanIUse extension for Brackets. Given than I've already worked with the CanIUse data before, I figured it would be pretty easy. Within about an hour or so I got to the point where I could list out all the filters, allow you to filter to quickly find one, and then select a feature and get part of the report. 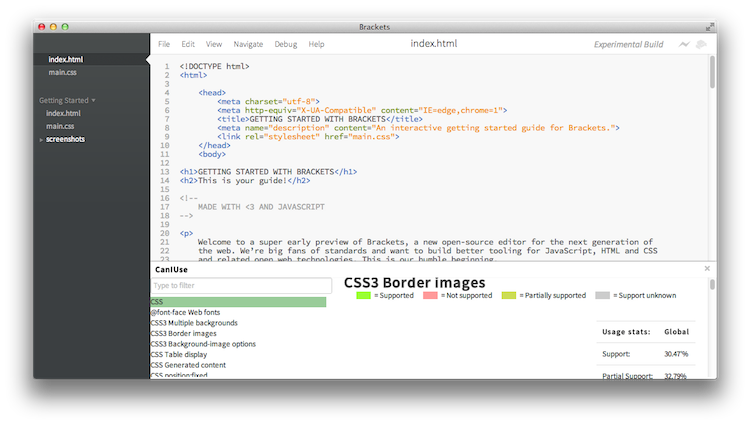 For the most part, I was done, but I was dreading the rest of the work. Why? I knew I'd have to build out the support table by hand. It would be a slow, laborious process and I wasn't looking forward to it. (And in fact, I considered just plopping it up on GitHub and asking for help.)

This morning though I decided to just power through it and get it done. Before I went too far though I thought it might be cool if I could get a JavaScript templating engine working. I've blogged about this before and I knew it could be a big help if I could get it working within Brackets.

I spent a bit of time attempting to get this working when Adam Lehman tweeted at me that Mustache.js was included in Brackets.

I looked around a bit for an example and found it in the Edge Web Fonts extension. This extension ships with Edge Code (which is free!). Since Brackets extensions are as open source as the tool itself, I took a quick look at their code. In case you don't know how to find your extensions, both Brackets and Edge Code have a "Show Extensions Folder" under the Help menu: 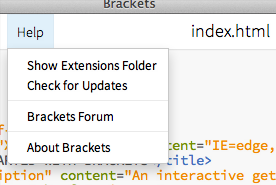 After digging through their code, I found the process to be incredibly simple. First, you can write your HTML templates making use of Mustache, or, even just use static HTML as well. Once you've made a few of them, simply include them in your main.js file:

Then, you simply use Mustache to compile the template and inject it as you would any other string. Here are two examples, a bit out of context. The first line shows my static HTML template (which needs no data) while the second is being used to display a feature object.

Just to give you some context, here is just some of the code I was able to rip out:

Horrible, right? I'm still working my way through the extension to build everything as a template.

Now - I did say "Tips", not "Tip", right? While digging through the Edge Web Fonts extension, I also saw something else cool. You can include a style sheet for your extension by requiring and making use of ExtensionUtils. It is as simple as this:

These two tips will make creating Brackets extensions a heck of a lot easier. In fact, I've got a little bug with my layout now. If I can't get it fixed, later on I'll be able to post the HTML/CSS by themselves for folks to give me a hand. Before today it would have been a lot more difficult for me to do so.