As a teenager, I was a regular, if somewhat casual comic reader. I picked up some X-Men, Spiderman, and, of course, Star Wars. However - I can still remember the day when I ran across this gem at my local store:

I had no idea comics could have such incredible artwork. Of course, I didn't even know what to expect when I actually read it.

I read comics even more then, and throughout college, but afterwards, I slowly stopped picking them up. Once Sandman ended, I felt like there wasn't much out there for me. (Obviously there was great stuff going on, I just didn't know.) Plus, I got tired of the whole "trying to get the complete story" thing by buying what felt like 30 different X-Men titles.

A few years back though I found myself drawn back. I'll be honest and admit it was due to finding out you could download comics online. I didn't even know digital versions of comics existed, but it was enough to bring me back to my local comic store and start a monthly selection of comics.

So - here is what I'm reading. They are in no particular order and are presented for you to comment, ridicule, and suggest. 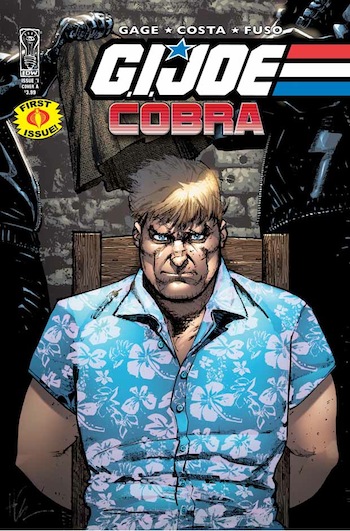 One of my first discoveries was the new line of GI Joe comics. These include: GI Joe, GI Joe: Cobra, and GI Joe: Snake Eyes. Each of these comics share the same world (there is also a GI Joe: Real American Hero) and a much grittier, realistic version of warfare. (If you have a somewhat loose version of realism.) You won't see soldiers firing blue and red lasers. People, lots of people, actually die. The story is pretty damn incredible. In this version, Cobra was, until recently, an unknown entity. The story of how Cobra moves on to the world stage is pretty damn cool. I read GI Joe as a kid, and yeah, I still pick up the somewhat childish RAH one as well, but I definitely recommend this line. If you only select one though, get Cobra. As we know, the bad guys always have the best story. 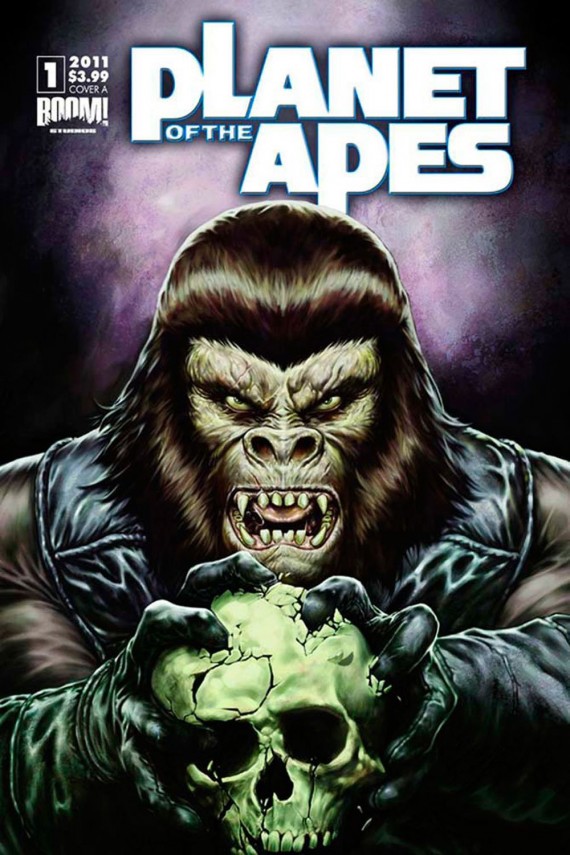 Forget the horrible remake. Heck, forget the really good recent movie. This comic is a fascinating look at the Planet of the Ape's world and mythology. It has many threads tying it to the original movies but has a very unique take on the idea as a whole. Great artwork as well. 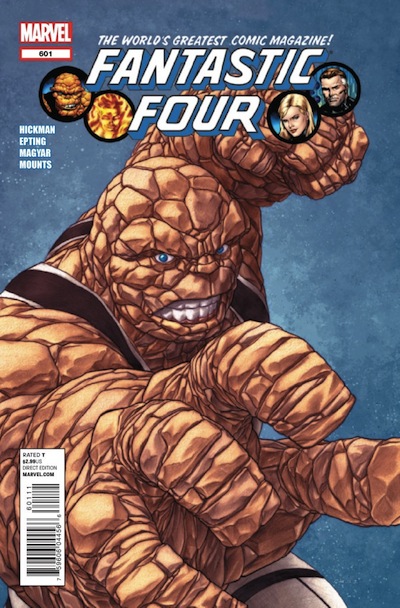 I just started reading Fantastic Four. I wanted to read one "mainstream" comic, and while I probably would have preferred an X-Men title or even Avengers, I thought I'd give FF a try. I never read them growing up, but something called me to it. I'm still not quite sure it's worth the money, but any comic that features Galactus every now and then has to be good. The issue I read yesterday was pretty damn incredible, so I'm going to keep it for a while. 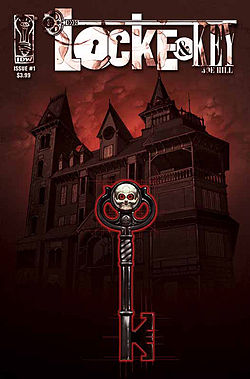 If I had to recommend only one comic it would be "Locke and Key" by Joe Hill (who is also a damn good prose author as well). A very dark fantasy/horror series, it just wrapped up its fifth set and is wrapping up with a final story line. (I know some folks don't want to take a chance on a comic that never ends.) I'd also recommend "The Cape".

For my final recommendation, try picking up "Sweets". This book was written by a local creator, Kody Chamberlain. I've known Kody for some time now and his work is pretty damn stellar. I made him promise me to draw me into his next series in exchange for some software I wasn't using anymore. All I hope is that I don't end up as a murder victim.

I am a huge fan of Locke & Key. Another I would recommend would be American Vampire.

Yes, I three love Locke & Key and I will second the recommendation for American Vampire. Like you I got out of comics for a long time and started picking them back up 7 or 8 years ago. In that time I've gradually moved away from reading super hero books as as you say they "never end". So now I find myself picking up a bunch of things like the aforementioned Locke & Key, American Vampire along with:

Sweet Tooth by Jeff Lemire - a post apocalyptic world of human animal hybrids which is both touching and chilling at the same time.
Unwritten by Peter Carey - which really blurs the line between do we make up stories, are they given to us and what power do they hold.
Chew by John Layman - absolutely mental take on the world where avian flu means all chicken is banned and the main character is a cibiopath i.e. anything he eats he instantly knows everything it has come into contact with. Hard to explain but quite fun.
Morning Glories by Nick Spencer - which it those 80's teenager movies got crossed with slasher flicks and Lost type mystery.
Criminal by Ed Brubaker - film noir in comic book form

and finally if you missed it while it was being published the series Gotham Central by Brubaker, Rucka and Lark was amazing. It followed the cops of the Gotham City precinct as they tried to do their jobs with all the superheroes and villains getting in the way. Just a great book.

I've been reading Ultimate Spider-Man, I know it's the least favorited Spider-Man series but I started reading the new volume with the new Spider-Man and wanted to get the backsstory on how Peter Parker dies. *spoiler*

I have read a few issues of Chew and it is fascinating. I never read comics as a kid (or young adult). I started reading them last year when DC did their 'reboot'. I have to admit, I have become quite smitten with Batman thanx to the reboot, but I find I enjoy stories like American Vampire & Locke & Key more.

Supercrooks & Secret Service, from Mark Millar, are very good (though only 2 issues each so far). 'Chosen' an ongoing story also by Mark Millar had a first series named 'American Jesus' that was very good. 'Superior' (again by Millar) was fantastic - I honestly think if Mark Millar wrote it, I could enjoy reading the phone book.

I can't stress enough that if you haven't checked out Fables, you really should. The writing is fantastic and the artwork is solid. Otherwise I'm a huge comic nerd and could probably recommend about 1K things to read. Recently, I picked up Ronin by Frank Miller and that was a great story as well.

+1 to American Vampire. It isn't on my pull list - but I've read some.

+Ryan: I was considering mentioning Ultimates. I discovered the series around the same time as I got back into comics in general. I found it pretty cool (the entire line) and was considering picking up one of them monthly, but I just couldn't commit to any.

+Millar: Yeah, everything I've read by him is damn good.

+Fables: I read about 60 issues - and liked it - but never got around to catching up.

I loved "Y: The Last Man". The writing, Brian Vaughn, is fantastic.

My iPad and my wallet are still recovering after I found comixology. I really like that I don't have to store my comics any more, well, most of them. I still buy Marvel in paper format as $3.99 6 months after they've stopped selling it on newsstands seems a little steep to me...especially when DC discounts to $1.99 after a month.

Check out 2000AD if you get a chance (2000adonline.com) (UK comic) They've started selling their comics in digital format and loads of great writers and artists. Where most of the "British comic invasion" came from :)

Love that old Sandman title! I have always been a big Moon Knight fan too - and what Marvel is doing with him these days is fascinating.

I also recommend Y: The Last Man by Brian Vaughn, it's a great stand alone series of 60 issues.

Hellboy & BPRD both continue to be two of my favorite comic series year after year. I think it's partly because I enjoy a lot of Mike Mignola's horror influences that he brings to both series. Both series have a number of great short stories as well as well as Mignola does some interesting things long term over the series with some great characters.

Just an FYI about Sandman, all the original graphic novels are going to be re-released in a boxed set this November.
http://www.amazon.com/Sandm...

Added to my wishlist - even though I already own em. ;)

As has been mentioned, Hellboy and BPRD are great reads.

On a less gritty note, I only recently discovered Atomic Robo, which is just plain fun. Comixology has several issues for free (mostly FCBD issues).

I also highly recommend Terry Moore's stuff. Echo was great and is fully collected in TPB now, I believe, and Strangers in Paradise was one of my wife's favorite comics other than Bone (also a great read if you haven't tried it yet). He has a new series out, Rachel Rising, that I haven't had a chance to look into yet.

And for the funny animal/gorgeous art/ladies itch, you can check out Liberty Meadows (Frank Cho's baby). I don't know if it's still being released, but the collections are available on Amazon

Have you tried "The Walking Dead" Ray?
http://www.amazon.com/The-W...

The TV show is based on them, but the comics are (as is always the case) so much better. The story lines get pretty dark and the zombies aren't really the main plot element.

It was my first conversion away from Marvel mainstream.

The Scott Pilgrim comics are also amazing, bu they're completely different, light hearted and wacky - again, there's obviously a movie based on that now too.

+Pete: I read the first 50 or so pages. In general, I liked it, but felt it began to drag and I lost interest. Love the show so far.