For the past few days I've been working on a proof of concept PhoneGap application that demonstrates an example of database synchronization. This is a fairly complex topic and I'm only going to demonstrate one version of this, but I hope the concepts, code, and example application are useful to people hoping to tackle the same problem.

In this scenario, we don't have to worry about user generated content and handling updates bidirectionally. That allows us to simplify things quite a bit.

We have two pieces to this proof of concept, the server and the client. I'm going to quickly talk about the server-side code, but as this is mainly a post about PhoneGap, I won't go into deep detail. I built a very simple ColdFusion application using ORM to allow me to add, edit, and delete objects I called "helpdocuments". These documents contained:

You can find the code for this simple application attached to this blog entry. But really - it's just simple CRUD and web forms: 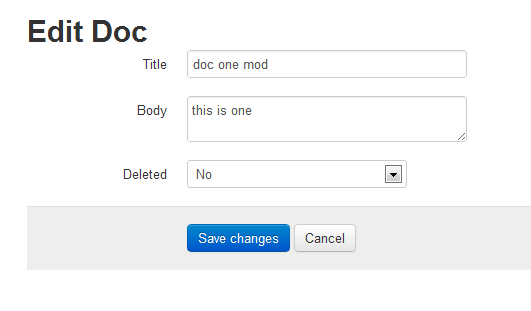 Outside of the service component I'll be using to expose this data remotely, you really don't have to worry about the details and forms here. Let's turn our attention to the client side now.

First off - do not forget that PhoneGap provides a wrapper to WebSQL, an embedded database you can use with JavaScript. You can check out the API docs as well as the video demonstration over on Adobe TV. My application will create a mirror version of the remote database to store a copy of the documentation. This involves:

Since the actual display is rather trivial, I'll show the HTML for the application first:

Yeah, that's it. Obviously a real application would have a bit more meat to it. Let's take a look at main.js, the core logic file for the application. This one is a bit more complex so we're going to take it in chunks.

In the first block, we've got a few variable definitions. The db variable will contain a reference to my database. The updateurl is simply the remote server. (And by the way, that URL isn't going to work after I publish this article.) Our init function listens for PhoneGap's deviceready event. This is PhoneGap's way of saying, "It's Business Time."

Here we have the startup function. It opens the database and begins a transaction. Note that I could have put the logic inside an anonymous function within the transaction call. You're going to see an example of that later. But in my opinion, the initialization routine would be complex enough to warrant moving it into its own function to keep things better organized. (It really isn't that complex, but I still feel like it was the right decision to make.)

Here's the error handler. Again - this would typically be more robust in a production environment:

You can see my table creation scheme uses columns that match up with my server. The only column missing is the "soft delete" one. My thinking here was that while my server wants to keep deleted documents around so that they can (possibly) be restored later, my mobile application should try to stay as thin as possible.

This is a great time now to talk about the token column. Both my server and client side have it. Why? In order to keep documents in sync from one database server to my mobile applications, I need a way to uniquely identify records. I'm not even sure if the WebSQL client (SQLite) supports inserts with assigned primary keys, but in my mind, the easiest way to handle this was to simply let each "side" handle the primary keys their own way and use the UUID as a way to connect them. This could possibly be done better.

After our table creation script runs, we finally get to dbReady:

As the comment says, this is where we begin our sync process. However, we only do this if the client is actually online. If it isn't, we immediately display our docs. On first run we won't have any, but after that we'll have something. This ensures that offline or online, we're going to support the user reading and interacting with the database.

Ok - now for the complex portion. Let's look at our synchronization function.

Local storage? I thought we were using a database? We are! But there's no reason we can't use both. While working on this proof of concept I had an interesting problem. I want to minimize the amount of data going back and forth between the application and the server. To do that, my application needs to tell the server what its most recent update was. One way of doing that would be run SQL against itself and get the date on the last updated document. That works fine... except for deletes. If the most recent update on the server was to delete something, then the client's most recent date wouldn't match. As I said above, we aren't keeping those deleted records. So as a compromise, I simply used a value in localStorage. Later on you will see where this gets updated.

Here's our server call. It basically pings the remote code and passes in a date. The server asks for all records modified since that date. The result is an array of objects.

Holy smokes that's a lot! Let's take it piece by piece. We begin with a simple forEach iterator over the array. For each item, we need to see if already exists. That's done in the SQL that checks for the token.

If a record exists, then we either need to update it, or delete it. Remember that our server keeps deleted documents and simply flags them. You can see my check for that flag here:

On the other side of the conditional, we only need to do an insert if the object isn't a delete.

Finally - we update our localStorage flag and call displayDocs too. Here's the display function - and again - this was built to be simple.

The end result is an application that updates its data when online and continues to work fine offline. You can download the entire code base below. Any questions?