Yesterday Mike Henke asked an interesting question on Twitter. (And I should thank him as this is the second time now one of his tweets has led to an interesting discussion.) He wished there was a way to make a try/catch be disabled when testing. Obviously you wouldn't do this in production, but I think most folks could imagine needing to temporarily disable a try/catch so that you can see full details of an error. I decided to take a quick look into this and found something I thought was interesting.

First off - if you are willing to edit code, then you could just remove the try/catch. Another quick hack would be to use a conditional rethrow as in the pseudo-code below:

That's a manual approach and would work, but I had a hunch about an alternative that could possibly work as well. I remembered that exceptions show up when ColdFusion debugging is turned on. So I whipped up a CFM with an error in it wrapped in try/catch then loaded it. As expected, my error was hidden in the main display, and down in my debug area I could clearly see the exception:

So that may be good enough. But there isn't a lot of detail in there. I opened up the debug template and looked at how we gather the exception info:

For the hell of it, I quickly added a cfdump and looked at the data. Guess what? The entire stack trace is there. The debug template simply doesn't use it. To be fair, they are kinda big, but I went ahead and modified the display code:

Just to be sure it's clear - my modification is the cfdump. Here's a screen shot: 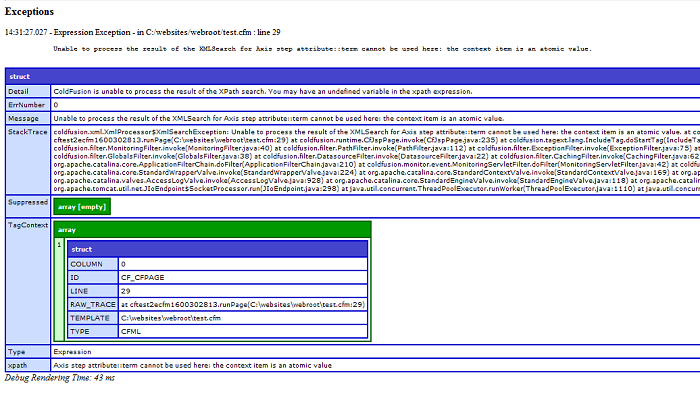 What do folks think about this approach? I know I've said it many times before, but do not forget that both the debug and exception templates are open source. You can hack them up - as I and others have done over the years. If you want to try this mod, just save the attached file to your WEB-INF/debug folder and select the filename "ray" in your ColdFusion Administrator settings.

I have been looking for something like this forever. I like your approach, but it might be something I can use.
I just removed it in deve and put it back in producttion.

I will try this tomorrow since I am working on an update to a web app right now.

I'd been using a cfinclude for my cfcatch that contains my error code, but I like this better too.

My only beef with this approach is that editing system CF files means that you have to remember to do it with every upgrade. Not a show stopper, but it is just one more thing you might forget when moving to a new box or upgrading.

Technically you can make a copy of default.cfm - that's what I did. ;)